Emilie Risberg was a teacher and an author. She founded a school for girls.

Emilie Risberg was the daughter of Benjamin Risberg, a commission surveyor and postmaster, and his wife Hedvig Smedberg. She grew up in Skara. The family home was a musical and literary one. Emilie Risberg lost her father when she was only fourteen years old. Her mother was then invited by a relative, named von Essen, to live along with her daughters at the Vreten estate which lay between Skövde and Tidaholm. Following the death of her mother, just a few years later, Emilie Risberg began to work as a teacher. She founded a small school for girls in Mariestad, where she worked until 1850, at which point she moved to Skövde. There she initially worked as a private teacher, which included working for Gustaf Wilhelm Gumaelius, a priest who founded the first junior school in Örebro.

In 1863 Emilie Risberg founded Elementarläroverket för flickor (elementary school for girls) in Örebro. Initially there were only a few assistants, but her school was a successful enterprise and when she left it in 1878 it comprised eight classes and half a dozen teachers. The school’s teaching syllabus included three foreign languages: German, French, and English. Emilie Risberg’s main teaching subject was Christianity, but she also taught French and English. The school was well-established and had been in receipt of state subsidies since these had been introduced in 1874. Later the school was transformed into a municipal school for girls and then a coeducational high school which until its shutdown in 2016 was known as Risbergska gymnasiet.

Following the great Örebro fire of 1854 Emilie Risberg, using the pseudonym of E. R., wrote some accounts of the conditions in the town. When Fredrika Bremer visited the town that same year the two of them met and Fredrika Bremer is said to have encouraged Emilie Risberg to write more. She then produced an extensive and – at least in her day – much appreciated literary output, particularly of historical novels. Her most successful were Rolf och Alfhild, from 1860, and Warnhems ros, from 1861. Following her retirement she began to work for Nerikes Allehanda where, during the 1878–1890 period, she was responsible for the puzzle and word game section. She also translated moral tales from French and German. 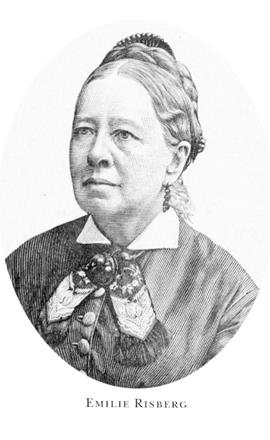