Marika Stiernstedt was a highly productive and much-loved author of the first half of the twentieth century. She was the first female chair of Sveriges Författareförening (Swedish Writers’ Association).

Marika Stiernstedt grew up within an upper-class environment in Uppsala. She was the firstborn child of Pauline Ciechanowiecka and William Stjernstedt, both of whom were members of the nobility. When Marika Stiernstedt was just one year old her mother died in childbirth whilst delivering her second child. Her father quickly remarried, to his former wife’s younger sister. Marika Stiernstedt received her education at home, where both French and Swedish were spoken. At the age of 13 Marika Stiernstedt was sent to a Catholic convent school near Paris which she attended for two years. One of her paternal aunts lived in Paris.

Marika Stiernstedt married twice. In 1900 she married Carl Cederström, who was a pioneer of the aviation industry and later gained the nickname “flygarbaronen” (the flying baron). With him she had a daughter named Lena. In 1909 Marika Stiernstedt married Ludvig Nordström, an author who also brought his illegitimate daughter Ruth into their family. This second marriage was dissolved in 1938.

Marika Stiernstedt made her literary debut at the age of 19 when she published a novel entitled Sven Vingedal in 1894, albeit the book was released under the pseudonym of Mark Stern. She wrote industriously until her fourth book, a novel published in 1899 called Slätten, received damning reviews following which she quickly abandoned her writing career. She nevertheless released a serial in 1903 in the Dagens Nyheter newspaper, entitled Fru Govenius, which was followed up two years later by a novel called Janinas hjärta. Both of these works were published under her own name. During the period that her first marriage was coming to an end Marika Stiernstedt made contact with several of the young authors of her day, including Henning Berger and Henning von Melsted. She also renewed her connection with another author, Albert Engström, which developed into a romantic relationship. However, Marika Stiernstedt was the only one of the two to fulfil their jointly planned ‘elopement’ and this gave her estranged husband a reason to divorce her.

Following her first divorce, in 1906, Marika Stiernstedt spent a year living in Paris. During this period she published a collection of short stories entitled Den halte Eros, published in 1906, as well as a novel called Det röda inslaget, published in 1907. The latter in particular was viewed as extremely audacious and although it served as something of a breakthrough novel for Marika Stiernstedt it was also considered to be somewhat scandalous. Through these books Marika Stiernstedt broke new ground within a field which had previously solely been a male domain. She candidly portrayed the female character type which came to be known as ‘Den nya kvinnan’ (the new woman), further developing her depictions of these women’s struggles for emancipation as well as their shortcomings in her ensuing novels.

The unspoken agreement within their marriage, which is already apparent in their early correspondence, was that Ludvig Nordström was the literary genius of the two and this understanding remained in place despite Marika Stiernstedt’s subsequent great successes. Whilst Ludvig Nordström devoted many years to his many novels which tended to be panned by the reviewers, Marika Stiernstedt successfully published a novel almost every year and was thus able to provide for the family. Thus, at least from an external perspective, the couple’s marital roles were the reverse of the traditional norm and they almost became the darlings of the contemporary press. The reality, however, was very different. Although Marika Stiernstedt believed she had finally met a modern man Ludvig Nordström retained an old-fashioned view of women despite his political radicalism.

The couple initially lived in Strängnäs, but it was not long before they returned to Stockholm. In 1912 they moved to a newly-constructed house in Djursholm where they remained until their divorce. Subsequently Marika Stiernstedt lived in the house belonging to Samfundet De Nio (the Nine Society) at Villagatan in Stockholm until she later moved to Viken, near Helsingborg, where her daughter worked at Stadsteatern (the city theatre).

The female lead characters in Marika Stiernstedt’s novels demand the same freedoms as men in a clear manner. In contrast to many other contemporary writers Marika Stiernstedt does not emphasise sexual freedom. In her major series of novels called Vägarne and published between 1909–1912 – which coincided with the early years of her marriage to Nordström – the leading female characters live their sexuality to the full, such as the main character in the fourth and final part, Daniela Herz, and suffer for it. What mattered to Marika Stiernstedt was taking responsibility for one’s own life, consciously educating oneself, and becoming an independent person. Her lead characters had to struggle with the double standards of society’s morals, whether they were true to their sexuality or not. The last two sections of Vägarne were adapted for the silver screen by Victor Sjöström in 1915.

In her next novel, called Alma Wittfogels rykte from 1913, Marika Stiernstedt uses the lifestories of several women to reveal the difficult balancing act which modern women had to perform during this period of transition. The title character, Alma Wittfogel, has her reputation ruined following an entirely innocent incident but is able to resolve her situation. Things turn out much worse for her childhood friend, Marjanna, who is sexually abused, falls pregnant, turns to prostitution, and finally takes her own life. The slightly contrived happy ending technique, which Marika Stiernstedt often made use of, sees Alma collecting Marjanna’s child from the foster home.

Having a hidden child is also the lead character’s dark secret in the novel Fröken Liwin from 1925. Elma Liwin is, as the novel opens, a middle-aged, successful, and highly respected but reclusive and cold career woman. She carries the secret that when she was younger she gave birth to a child who she was forced to abandon. As the story unfolds, however, her past catches up with her and her façade crumbles. Marika Stiernstedt allows the character of Elma to die but implies that hope lies with her daughter. Fredrik Böök, an influential contemporary reviewer, wrote in the foreword of the edition which was included in the series called De nya berättarna, that Marika Stiernstedt “never surpassed this point” in her ability to tell a story.

Marika Stiernstedt was one of the most celebrated and most-read writers of the interwar period. In honour of her 60th birthday in 1935 the Albert Bonnier publishing house released all her novels in a twelve-volume collection. The tone of the novels she wrote during the 1930s and 1940s becomes progressively darker. Her portrayals of marriage, such as the 1940 Man glömmer ingenting and the 1947 Banketten – the latter of which was adapted for the silver screen by Hasse Ekamn in 1948 – finds the respective couples in continuous and unforgiving fights. Ulf Wittrock, who read the books as biographical works, believed that Marika Stiernstedt was in fact depicting her own husband when she wrote about the alcoholic and ill-natured wife in the first of the aforenoted books. Margareta Fahlgren, a literary expert, has pointed out that this book contains the first portrayal of a female alcoholic in Swedish literature.

Marika Stiernstedt was a Francophile and she was politically a radical. During the First World War she was the first woman to undertake a fact-finding journey to France, which resulted in the 1916 book Frankrikes själ. She was also one of the few to pay heed to the terrible situation in the Ottoman empire at that time. Her book 1917 Armeniernas fruktansvärda läge describes the genocide of the Armenians and the Christians. During the Second World War she revisited France for new subject material and wrote Allvar över Frankrike, published in 1940. She was fiercely anti-Nazi and was one of the few Swedish writers who produced so-called ‘beredskapslitteratur’ (pre-war literature), namely two deeply anti-fascist novels Attentat i Paris, from 1942, and Indiansommar from 1944. The former was adapted for the stage and performed at the Dramaten theatre the same year it was published. It was then adapted for the silver screen in 1944 by Gustaf Molander. Marika Stiernstedt was an active member of the anti-Nazi network called Tisdagsklubben (the Tuesday club), set up by Amelie Posse, and she became increasingly radicalised during the war period. Whilst she served as chair of Författareförening a journey to Moscow was organised in 1934, which resulted in her book Ryskt, published in 1935.

In addition to her extensive book output – numbering 21 works – Marika Stiernstedt also wrote short stories, factual reports, and plays. She provided reviews for the daily press and for the Idun journal. She also held many elected positions. She was on the board for Rädda Barnen (Save the Children) for a long time, she served as chair of Sveriges Författareförening from 1931–1936 and then again from 1940–1943. From 1918 onwards she was a member of Samfundet De Nio, serving as the group’s secretary from 1936 until her death.

Marika Stiernstedt also wrote a number of autobiographical pieces. Two of these, Adjö min gröna ungdom and Mitt och de mina were produced when she was 50 years old, along with volume of portraits of friendship from 1948 which she entitled Mest sanning. Her major autobiographical book, Kring ett äktenskap, from 1953, depicts her marriage to Ludvig Nordström. The diaries which she kept at this time reveal how she struggled with the anger and sorrow which arose during the time she wrote the book. Following publication the book engendered a lot of attention. Many believed that her description of her former husband was purely bitter and merciless. She herself felt it was discreet. Another of her autobiographical works was Ulla-Bella, published in 1922, which portrays the life of a young girl. It is sometimes referred to as the first girl’s book written in Sweden and has become somewhat of a classic.

Marika Stiernstedt’s final work, a collection of short stories called Bland människor, was intended to be released to mark her 80th birthday but was eventually published posthumously.

Marika Stiernstedt died in 1954. She is buried at the cemetery in Viken. 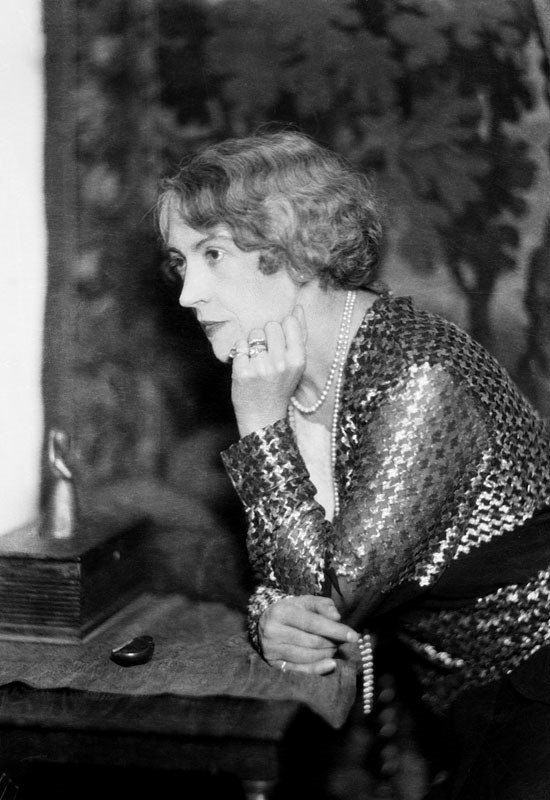