Matilda Widegren was a teacher, textbook author, and a committed peace activist. She was the chairwoman of the Women’s International League for Peace and Freedom (Sweden) from its founding in 1919 until 1934, and the initiative-taker to the refugee aid group Internationella foyern in 1935.

Matilda Widegren was born in 1863 in Söderköping, the only child of Aurora Fredrica August, née Steinnordh, and her husband Per Mauritz, a grammar school principal. After her mother died in 1879, Matilda Widegren and her father moved to Stockholm. She attended Statens Normalskola for girls (SN) in 1880–1882. It was the practice school for the higher teacher training college for schoolmistresses (HLS), where she later trained for three years to become a subject teacher in Swedish and history. She was a classmate and friend of Selma Lagerlöf at the college. After having taught at the Åhlinska school in Stockholm for a couple of years, she returned to the college as librarian in 1888–1905, while at the same time being an extra teacher at SN for girls in 1889–1904. She also participated in a fourth-year course for special studies at HLS in 1893. From 1904–1923 until her retirement, she was a fulltime teacher at HLS and SN for girls and also the assistant principal at the latter.

Matilda Widegren was a teacher with many ideas. She wrote a textbook in grammar in 1896: Svenska språkets allm. satslära jämte interpunktionslära. With her colleague Dagmar Lauritzen, she wrote Svenska språkets formlära för begynnare jämte en samling öfningsexempel, in 1902. Both textbooks were published in many editions until the mid–1900s. Matilda Widegren and her colleague Ingeborg Lundström published anthologies for school and home at the end of the 1800s, with selected poetry excerpts, and for higher school classes with prose excerpts. They were also published in several editions.

One of the climaxes in Matilda Widegren’s pedagogical life was a journey funded by a state grant to the USA in 1904. She had been given the assignment of being a member of the teaching jury at the world exhibition in St Louis and was to organise the Swedish contribution. She returned home with many new ideas that she spread among her colleagues, for example that younger pupils could work on their own in their learning; self-government for the older pupils; and the introduction of art history in the highest class.

Matilda Widegren was engaged on several committees and boards, for example for the Pedagogical library at HLS in 1889, for the Centralstyrelsen för Flick- och Samskolföreningen in 1901, for the Swedish school museum in 1907, and for Ro, the home for elderly Swedish schoolmistresses in 1912. She had already become a member in 1897 of the women’s academy Sällskapet Nya Idun.

When women’s organisations with representatives from Europe and the USA arranged an international congress in The Hague 1915 to stop the war, Matilda Widegren was one of the 16 Swedish delegates. Some of the other delegates were: Emilia Fogelklou, Anna Kleman, Anna Lindhagen, Naima Sahlbom, Elisabeth Wærn-Bugge and Elin Wägner. For four days, women from warring and neutral lands in Europe and also the USA met up. The congress’s decision to send out smaller women’s delegations to the governments of both neutral and warring countries to demand neutral mediation was carried out afterwards. When the women’s delegation who had visited the Tsar returned via Stockholm, an extensive action, Kvinnornas fredssöndag (Women’s Sunday for Peace) had been arranged there. Over 88,000 women all over Sweden held meetings at which they demanded mediation to put an end to the bloody battles, and Matilda Widegren was one of the organisers.

Her great interest in peace work started in The Hague and she was engaged as the vice chairwoman of the Swedish section of the International Committee of Women for Permanent Peace (IWCPP) in 1915–1919, one of the national committees started in various countries after The Hague congress. The chairwoman was Ellen Palmstierna and members of the committee included Nina Benner-Anderson, Anna Kleman and Anna Lindhagen. Several more women joined eventually. They contacted the committees in Norway and Denmark to develop common demands to their governments, collected press cuttings, made a list of women’s peace work and started branches out in the country. Matilda Widegren took upon herself the pedagogical assignment of educating young people for peace, one of the items on The Hague Congress’s resolution, and she founded the Swedish schoolmistresses’ peace group. The members hunted for Swedish poems on the theme of peace and also peace heroes in the history books. They studied the work of the Quakers and the conditions of conscientious objectors. At the same time, Matilda Widegren recommended collaboration between various peace associations and additional information, apart from the ongoing women’s peace work and educating the youth. She had been a member of the Svenska Freds- och Skiljedomsföreningen (SFSF) for a long time and in 1916 she was voted onto the association’s central board as the representative for women’s organisations. The printed lecture Kvinnornas fredsarbete: Föredrag i Vita Bandet that Matilda Widegren held in 1916 for the temperance organisation Vita bandet, that had its own peace department, bears witness to her informative work during the first world war.

When the war ended, the national committees gathered to work for a lasting peace in Zürich in 1919. There they founded the Women’s International League for Peace and Freedom (WILPF). The chairwoman of the Swedish section, Internationella Kvinnoförbundet för Fred och Frihet (IKFF) was Matilda Widegren, from 1919 until 1934. In 1920, she published the pamphlet Vad vill "Kvinnornas internationella förbund för fred och frihet". The same year, the schoolmistresses’ peace group opened their doors to male membership under the name Svenska skolornas fredsförbund, in which Matilda Widegren was elected vice chairperson. One year later, she was elected vice chairperson for SFSF. From 1923 onwards, both peace organisations SFSF and IKFF started to produce a common magazine: Nya Vägar. Matilda Widegren had in this way created a broad cooperative platform for peace work. When she retired in 1923 at the age of sixty, she was awarded the Illis quorum medal, and then she was able to dedicate herself fulltime to peace work.

Matilda Widegren and Naima Sahlbom, who was a chemist engaged in the work against using gas in war, were both consultative members of WILPF’s executive committee, and took turns at participating in their meetings that were often held in Geneva. One of Matilda Widegren’s ideas was the border mission, a reconciliation effort in the border regions between former warring countries to reduce hatred and increase understanding. She put forward her idea at the 1924 WILPF congress in Vienna. It fell in good soil and an international committee was formed with Matilda Widegren as chairperson. To support the reconciliation work, she started the collection “A krona for peace”, money collected in neutral countries that had not suffered in the same way from the war. Matilda Widegren herself travelled on several lecture tours to conflict areas in different countries.

Yet another idea that she carried out was IKFF’s information courses, starting with small study groups in the Vita Bandet premises and later in the physicians’ association’s premises in Stockholm in 1925. The information courses were moved out into the country and the content changed. From having been about the peace treaties and the new Europe, the subjects were various international cooperative efforts. One information course that stood out was organised in Malmö and Lund in 1929 by Anna T Nilsson and Axel and Signe Höjer, at which the county governor, bishop and mayor paid for the guests’ board and lodging. Professors and other invited guests gave lectures on topics of current interest.

WILPF had collected funds for its own building in Geneva, Maison Internationale, where Matilda Widegren often stayed when she participated in the association’s meetings and also orientated herself on NF’s work. Matilda Widegren published a pamphlet in 1931 entitled Nationernas förbund, vad det är och vill, a text aimed a school pupils. In Sweden, she continued during the 1920s with her pedagogical peace work. She participated in the peace day Skolornas fredsdag that was arranged regularly during the decade. She was made a member of the board of the Norwegian teachers’ peace association in 1925. Matilda Widegren always saw opportunities for collaboration and took the initiative to them. She was a board member of the cooperative Samarbetskommittén för fredsfrågor in 1927. She was a member of Rådet för Nordiska föreningen för mellanfolkligt samarbete för fred from 1929 and the same year also a board member of the Informationsbyrån för fredsfrågor och mellanfolkligt samarbete. When she resigned as the chairwoman of IKFF in 1934, she was elected honorary chairwoman.

During the 1930s, Matilda Widegren saw the need for refugee aid and with other volunteers, she started Internationella foyern in Stockholm in 1935, in a dark warehouse in Västerlånggatan. The organisation gave aid and support to all kinds of refugees. It was a place for meetings, with a reading room and the provision of simple meals. The Internationella foyern also contributed a collection of clothes, household implements and in certain cases work tools, as well as enabling contacts between people.

Matilda Widegren, who never had much of a pension, gave away much of what she owned. At the end of her life, she moved to Ro, the home for elderly Swedish schoolmistresses. There she lived in one room under small economic conditions. Matilda Widegren died in 1938. She lies buried in Sankt Laurentii Cemetery in Söderköping.

Many representatives for various associations participated in her funeral. Selma Lagerlöf wrote Till Matilda Widegren. Minnesord that was read aloud. She thanked her for their long friendship, reminded everyone of Matilda Widegren’s thorough proof-reading in 1891 of the manuscript of Gösta Berlings saga, but focused mainly on all the help she had given other people. 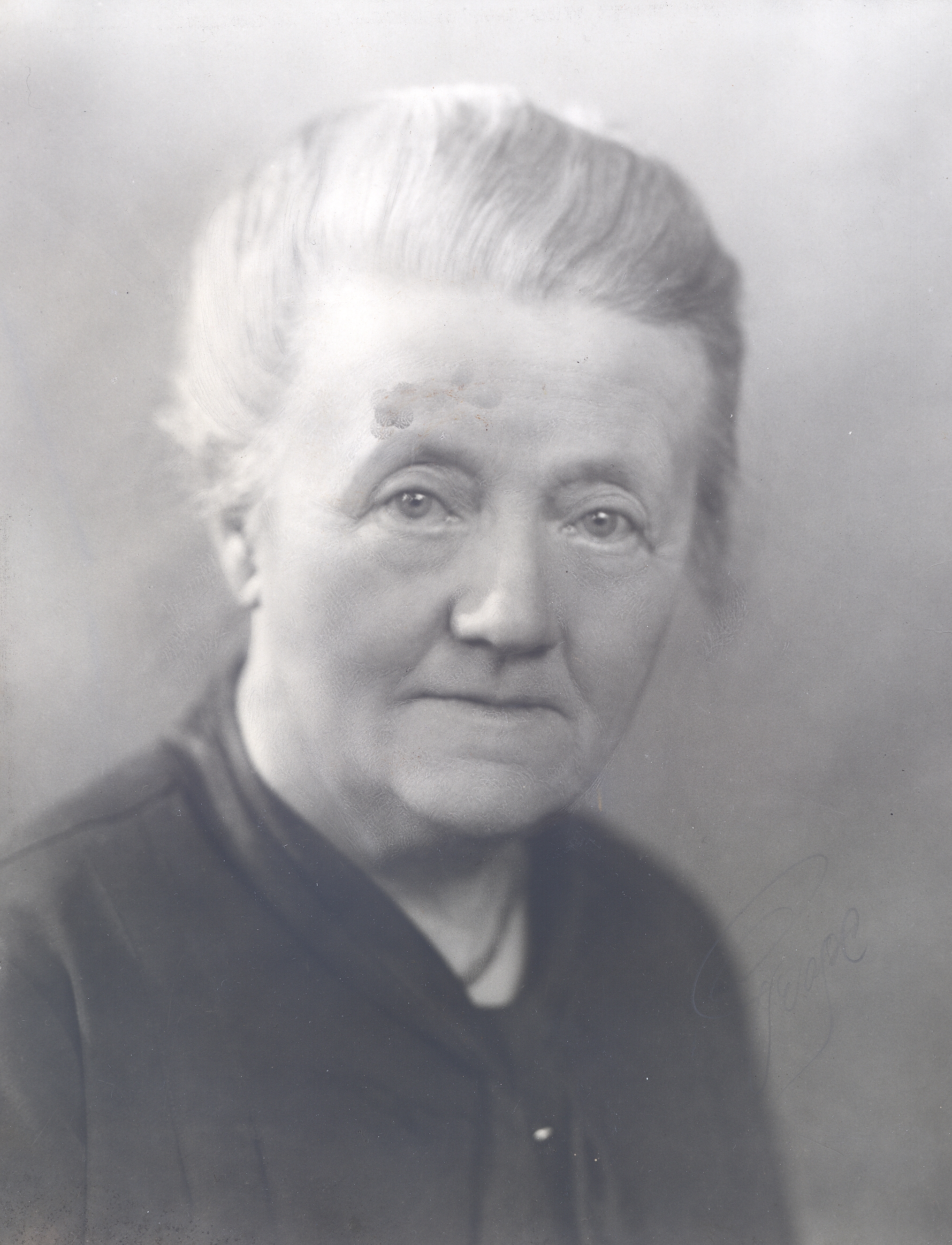