Joy Zandén was a decorator and a theatre scenery painter. She made her public breakthrough as a textile artist at the age of 94.

Joy Zandén was born in Helsinki in 1922. She spent the first ten years of her life in Paris. She was born into a family of artists: her father, Gösta Nystroem, was a composer and her mother, Gladys Heyman, was a sculptor who was of Jewish ancestry. Joy Zandén had two younger sisters: Liliane and Mona. Joy Zandén had been born in Finland because her father wanted to visit a colleague and had taken his highly-pregnant wife with him across the Baltic Sea. It didn’t make things easier that the child was born whilst the couple were travelling.

The family socialised within the artistic circles of Paris. One of Joy Zandén’s father’s good friends was the artist and author Gösta Adrian-Nilsson (GAN). When Joy Zandén was only seven months old she received a picture book from GAN as a Christmas present which was inscribed “To Joy Christmas Eve 1922 in Paris”. It contains nine illustrations depicting the life of the Nystroem family in the French capital, each accompanied by short subtle verses.

As a consequence of increasing anti-Semitism the family opted to leave Paris in 1932. They moved to Gothenburg but they spent their summers at Joy Zandén’s maternal grandparents’ place on Särö. There they socialised with fellow artists such as Isaac Grünewald, Sigrid Hjertén, and other members of the Gothenburg colourists. Joy Zandén was much taken by the surrounding nature, the rocks, sea and plants.

Joy Zandén and her younger sister belonged to an artists’ group on Särö. One summer the group carried out a carefully planned and prepared project. Early one morning at 5 am they snuck out, with paint boxes and brushes, working quickly and methodically whilst some kept watch. Once they had completed their work they ran home and threw away the remaining paint and brushes. The next morning the black steam engine on the Särö railway generated a lot of attention as it appeared to have a new “outfit”. It had been covered in flowers in bright colours by anonymous “graffiti marauders” and many decades would pass before their names were ever revealed.

Joy Zandén and her sisters attended the advanced coeducational school in Gothenburg and she eventually trained at Slöjdföreningen school (now HDK-Valand) in Gothenburg. In the early 1940s she also attended Anders Beckman’s school of advertising (now Beckman’s designhögskola, college of design) in Stockholm. Once she had completed her training she found employment at the Royal Opera in Stockholm and at Stora Teatern (grand theatre) in Gothenburg. She had a broad range of artistic expression which included art, fashion, advertising, and theatre scenography.

Joy Zandén spent the Second World War years in Copenhagen working as a theatre painter at Det Kongelige Teater. In 1946 she got married and had a son named Finn. Her marriage did not last and in 1948 she and her son left Denmark and returned to Gothenburg. Back in Sweden she began to work as a pattern designer at her family’s textile company called Heyman & Holmberg. Her designs were typical of the light and airy designs known as Swedish modern which was the latest trend. Joy Zandén was keen to stand on her own two feet and in the early 1950s she headed off to New York, taking a portfolio of her work with her. There she trundled from shop to shop, from company to company, but was ultimately unsuccessful and was unable to make a sale. This delivered a real blow to her self-esteem and on her return to Sweden she wrapped her designs up in brown paper and stuffed them away into a box in the cellar.

In 1953 Joy Zandén got married for a second time. Her second husband was Rolf Zandén and they had two children – Philip and Jessica – together. She devoted herself to the family, living initially in Stockholm and then moving to Gothenburg. For a time Joy Zandén worked at the shop in Moderna Museet. On the death of her father in 1966 she and her sisters inherited Furulund, the family house on Särö where her father had had his own studio. Liliane and Mona were by this time living in the USA but Joy Zandén maintained the family house and everyone would gather there each summer. Towards the end of the 1980s she bought her sisters’ shares in the house and then settled there permanently.

Joy Zandén’s daughter Jessica had, as a child, seen the rolled up papers containing her mother’s designs stored in the cellar. She came up with a plan to get them printed. The project was never realised but in 2016, when Joy Zandén was already 94 years old, Sandbergs Tapeter snapped up the designs and had three of them printed as wallpaper. The nature-inspired patterns which comprised birds, flowers, and cliffs were an immediate hit and generated attention far beyond the Swedish borders. These patterns, which Joy Zandén had designed in her youth and which had been intended for use on textiles, instead came to decorate the walls of many a home.

Jessica Zandén and her mother jointly set up Joy Zandén AB and in 2000 it was still producing items such as table-mats, trays, and aprons displaying Joy Zandén’s original designs. The company motto was, aptly enough, “It is never too late”. Today several wallpaper producers still use Joy Zandén’s designs but her designs can also be found within the textile sphere: furniture companies sell interior design collections based on her Regnskog while clothing companies offer collections using her Västerskog, Midsommarafton, and Ängsull designs.

The year after her late-onset success, in 2017, Joy Zandén died just before her 95th birthday. That same year Beckmans designskola held an exhibition in celebration of creative females and Joy Zandén was the first designer to be honoured. 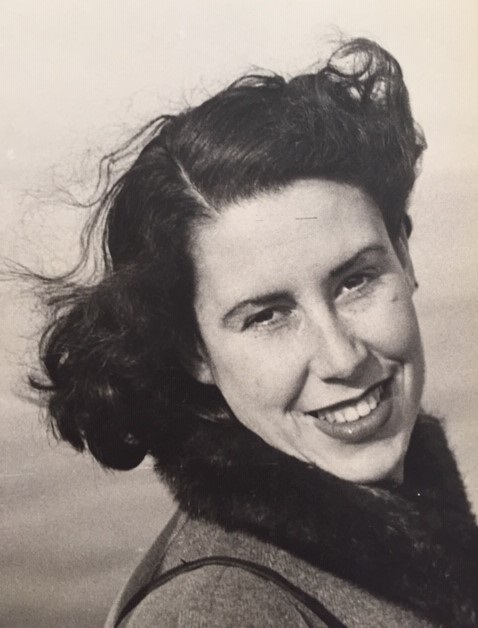