Ester Lutteman was born in 1888. She was the daughter of a pastor in Ångermanland. After gaining her school-leaving certificate she studied mathematics and chemistry at Lund university. She was active within the student Christian movement and the ‘ungkyrkorörelse’ (youth church movement). Through the latter she came to know Axel Lutteman, a priest she married in 1912. They never had children and her husband died in 1920 following a brief illness. They had been brought together by their shared passion for the Swedish church and their early days as a married couple were spent in Köping. Later they both worked with Diakonistyrelsen (the parish board) in Stockholm. Ester Lutteman was initially a ‘resetalare’ (travelling speaker) and then editor of the Sunday school magazine Sveriges Barn.

Ester Lutteman received the calling to become a priest in the Swedish church in 1919. Although women were not allowed to become priests at that time a parliamentary motion was put forward the same year which proposed that this should change. Ester Lutteman believed that the motion would gain approval and so she and her husband decided to leave Diakonistyrelsen and begin studying theology at Uppsala. Following her husband’s death she instead returned to Lund where she gained very high marks for her Bachelor of Theology in 1924.

In early 1920 the issue of women’s accession to the priesthood was investigated but no decision was taken despite the moving of a government motion. From 1924–1925 Ester Lutteman then worked as a teacher for the Swedish church layman’s school in Sigtuna. Her responsibilities from 1925–1929 included working with women’s issues and evangelizing within women’s spheres on behalf of Diakonistyrelsen. Her work mainly involved running courses, giving talks, and leading Bible-study groups across the nation.

On the Diakonistyrelsen courses for public school teachers Ester Lutteman taught the same historical-critical perspective of the Bible that was taught at Swedish universities. Diakonistyrelsen worried about how conservative members of the church would react to her Bible-study courses. In 1929 Ester Lutteman left Diakonstyrelsen following a disagreement with its leadership. She then earned her keep mainly as a freelance speaker. She lectured on the Christian faith and ethical matters, and was hired by several organisations throughout Sweden. She would refer to her sermons as ‘lectures’ in order to avoid criticism.

Ester Lutteman was one of the first women involved in the Swedish church council, which she had been elected onto in 1938 along with Gunni Hermelin. She was also a member of the national enquiry which produced the SOU-report Kvinnas behörighet till kyrkliga ämbeten och tjänster: betänkande av inom Ecklesiastikdepartementet tillkallade sakkunniga in the period 1946–1950.

Ester Lutteman was active within several women’s and peace organisations. From 1943–1953 she was also a member of Kommittén för radions religiösa program (committee for religious radio programmes) and she herself held several radio services. She was at pains, in these services and in her books on the Christian faith, to express Christian belief in such a way that all intellectually-inclined individuals could understand it and share it.

Ester Lutteman was a driving force within Vadstenaringen, established in 1928 and disbanded in 1988. She was the official chair of the group from 1928–1948 and for a while also served at its spiritual leader. Vadstenaringen was a group of Christian women who sought to strengthen their members’ Christian beliefs and spiritual lives by meeting for Bible study, conversations, lectures, and

services whilst each member also had daily services separately and read the Bible according to a mutual plan. Within Vadstenaringen Ester Lutteman functioned as a priest, in everything but name. In 1950 she was awarded the Illis quorum medal of the 8th degree.

Ester Lutteman left the Swedish church when the 1957 church council rejected the government’s proposal to change the law so that women could become priests. At a public opinion meeting arranged by 20 women’s organisations and held at Borgarskolan in Stockholm on 24 September 1957 Ester Lutteman gave a speech in which she criticised the developments within the Swedish church in general and its handling of the issue of women priests specifically. She admitted at that meeting that she was about to leave the Swedish church. Although she had not lost her faith she was critical of the way the Swedish church was developing and convinced that God was greater than the church. She did however continue to be active as a public speaker and published books and articles on the Christian faith.

Ester Lutteman died in Uppsala in 1976. She is buried beside Axel Lutteman at the Norra cemetery in Solna. She chose to have a civil burial led by her friend Caisy Elander as she could not accept the view of death and the life that followed it as expressed within the Swedish church funeral ceremony. Nevertheless, there was an obvious Christian aspect to her funeral. 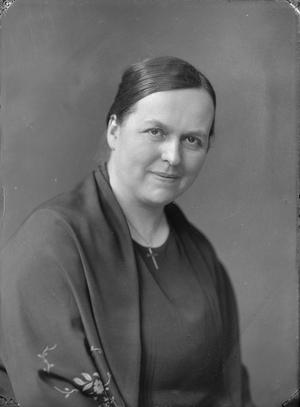