Birgit Th Sparre was one of the most popular authors in Sweden during the 1930s, 1940s and 1950s. She is best known for her novel Gårdarna runt sjön.

At the age of six months, Birgit Th Sparre came as a foster child to the Duke and Duchess Sparre at Sjöred Manor near Ulricehamn. Her biological parents are unknown. When she was six years old, she started attending the French School in Stockholm, where the whole family lived during term time. After six years at school, she studied with a governess at home for two years and then continued for two more years at the French School. During this period of her life she also took elocution lessons for Anders de Wahl and Karin Swanström.

In 1919, Sjöred was sold. Birgit Th Sparre’s father died and she moved with her mother to the newly built Åsundsholm Mansion close by. Mother and daughter had lived vagabond lives while waiting for Åsundsholm to be built. For long periods of time, they stayed in Paris, Scotland and England. Many winters were spent in Cairo, Nice, Palma de Mallorca and other towns and cities around the Mediterranean. Not surprisingly, Birgit Th Sparre’s literary debut was a travel book. When only 20 years old, in 1925, she wrote Ön av eld och lava, based on diary entries and her own photos from a stay on Tenerife in 1920–1921. Her next book, Ett leende from 1926 is partly based on one of her own experiences in artists’ circles in Paris. Maria del Carmen, from 1930 is set in Mallorca. In Heta kuster vid heta hav from 1934 she describes her and her mother’s round-the-world cruise and the adventures she experienced in Egypt, India, Zanzibar, Kenya, Palestine and several other places.

During this period, Birgit Th Sparre also wrote reviews and reports, mainly for Svenska Journalen. She often took her own experiences and meetings with other people as her point of departure. Her flair for drama and her interest in romance are striking but her reports, like her travel descriptions, often contain clarifying backgrounds and explanations of the happenings she describes.

Her great success came however in 1928, with the country house novel Gårdarna runt sjön. It turned out to be the first in a whole suite of novels about life in the old mansion houses round Lake Åsunden. The material is based on her childhood surroundings and several of the characters in the novels bear an unmistakable resemblance to relatives and former neighbours.

In 1937, Birgit Th Sparre married Carl Theodor Thäberg. Their honeymoon gave rise to the original and well-informed travel book Bröllopsresa i Libyen in 1939. They settled down in Djursholm and had two children, but the marriage only lasted a brief period and Birgit Th Sparre moved back to her mother at Åsundsholm with the children. During the second world war, she and the children returned to Stockholm and she embarked upon a new, large-scale suite of novels. The Glimringe series unfolds during the 1800s and is based to a great extent on authentic materials about the Limmared glassworks in the province of Västergötland. Her foster father’s paternal grandfather had once owned the glassworks.

An interesting interlude in Birgit Th Sparre’s extensive production of romantic stories set in the country house environment, are the satirical Kejsardagar och furstenätter from 1945 and Faster Gelatines underbara resa from 1948, written together with her good friend Knut Bonde, diplomat and author, under the shared pseudonym Teresina, Grand Duchess of Bourbon-Siena. These parodies on the traditional upper-class memoir awoke great appreciation even from the reviewers who were normally critical of her work.

In 1955, Birgit Th Sparre remarried, this time the author Stig Cederholm. He rapidly embezzled her assets and in 1959, Åsundsholm had to be sold at an executive auction. The couple had already separated in 1957, but they never formally completed their divorce.

Birgit Th Sparre’s books were printed in many editions. She was her publisher’s most sold author of popular novels. Her novels were published in serial form in various weeklies and they were translated into several languages. The Glimringe series was read aloud on the radio and her country house novels were filmed in 1957. She received many hundreds of letters from admirers during the years and was much sought after to give talks and readings. During the last 20 years of her life, she lived in Ulricehamn and at the end of the 1960s she started to guide coach tours to the country houses that she had brought to life in her novels. In 1981 she was chosen to be the first winner of the city’s culture prize.

Birgit Th Sparre died in Ulricehamn in 1984. She lies buried in her foster parents’ grave in Finnekumla Cemetary, close to her childhood home Sjöred. 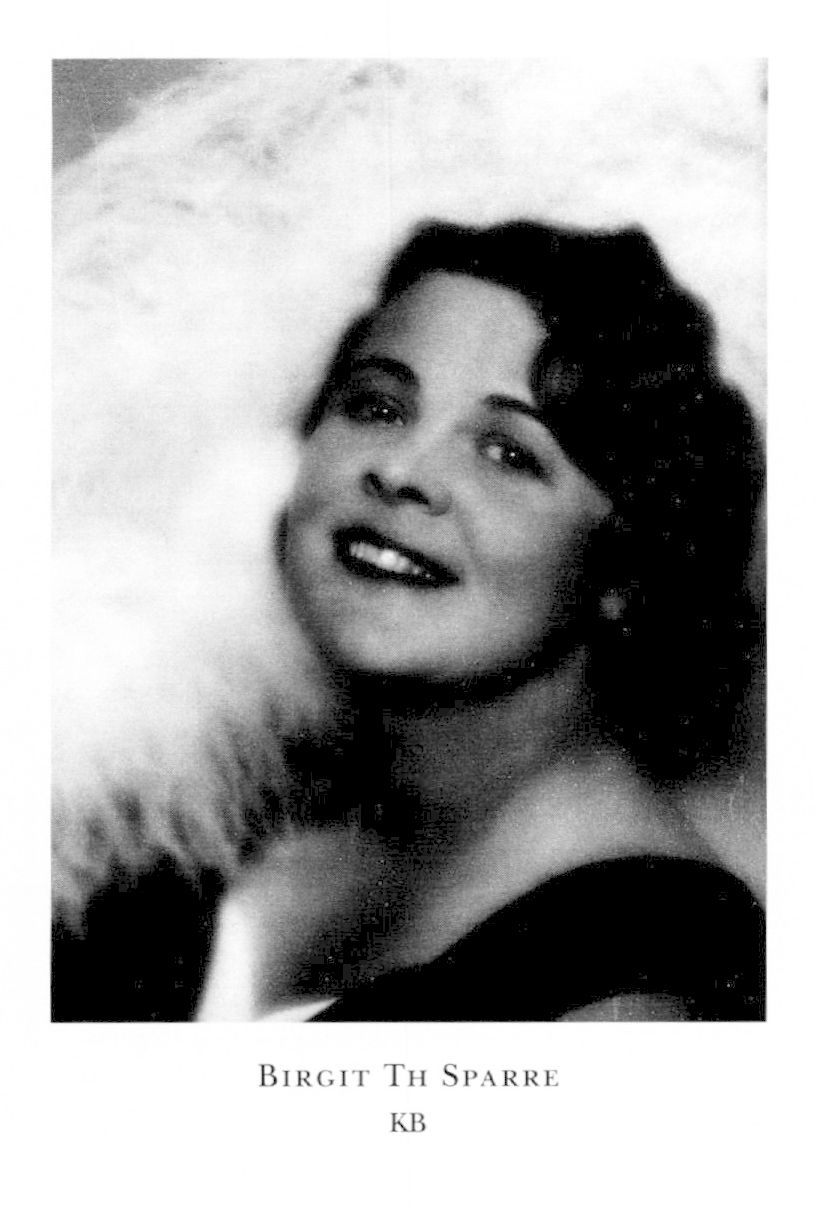