Berit Wallenberg was an archaeologist and art historian who also established a research foundation which awards funds within these areas. She held a dual licentiate degree in archaeology and art history. She was also an ethnologist and became the first woman in Sweden to be appointed an inspector for the national heritage board in conjunction with the renovation of Lovö church in 1935.

Berit Wallenberg was born in Stockholm in 1902. She was the eldest child born to Oscar Wallenberg and Beatrice, née Keiller. Her father, Oscar Wallenberg, was the son of André Oscar Wallenberg, the founder of Stockholms Enskilda Bank, later known as Skandinaviska Enskilda Banken (SEB). Her father was a captain, who also sat on approximately twenty different company boards as well as on committees and formal enqiries. Berit Wallenberg’s father admired and supported her in her academic success, albeit this only happened after she had entered university. Her mother, Beatrice Keiller, hailed from Gothenburg and was the daughter of Alexander Keiller the younger, a wholesale merchant, manufacturer and factory owner. Berit Wallenberg and her brother Carol were brought up in Villastan in Stockholm, an area where many people who were active within business and the cultural elite also lived. The family spent their summers on Särö, which was where Beatrice Keiller had grown up, as well as at their summer cottage of Viken in Lovö in Drottningholm.

When Berit Wallenberg was twenty years old she decided she wanted to become an art historian. Against her parents’ wishes she taught herself Latin in order to be able to get into high school. There she attended the classical section of the girls’ school Nya Elementarskolan för flickor in Stockholm, from whence she graduated in 1925. That very year she began studying at Stockholm college. She focused on art history and archaeology – Northern European, classical, Cyprean, and Chinese – and also studied ethnology. Within art history she specialised in the medieval frescos of Sweden, Denmark, and Finland.

Berit Wallenberg had already participated in a dig at a bronze age site in Laholm in 1924. During her student years she was at several digs, including the 1926 excavation of the old heathen temple in Gamla Uppsala, three excavations at Alvastra convent church and pile dwelling in 1927, 1928, and 1930, as well as one at Vendel church also in 1930. At the Alvastra digs she became acquainted with an archaeologist named Greta Arwidsson. During the 1927 excavation it was Berit Wallenberg who discovered the long searched for Sverker family grave at Alvastra, within the choir of the convent church. Berit Wallenberg attended advanced programmes in both art history and archaeology. She completed her licentiate dissertation in archaeology in 1931 on the topic of determining the bronze age period, although she waited until the following year to get her Bachelor’s degree. That same year she travelled to the Swedish Institute in Rome and whilst she was in Italy she received a diploma from the Byzantine Institute in Ravenna.

When the Lovö church restoration began in 1935 Berit Wallenberg was keen to become involved. Her participation there was authorised by Sigurd Curman, head of the national heritage board. Berit Wallenberg thus became the first woman to serve as an inspector for that board and her contributions appear to have far exceeded what the position actually required. This included the revelation of older, medieval elements in the church walls, the restoration of the crypt, and the returning of the medieval altar table – which she herself had discovered in use as a floor slab several years earlier – to its rightful place. As the church foundations were being reinforced Berit Wallenberg, along with the ethnologist Ann-Sofi Schotte-Lindsten, also had an archaeological dig set up. Further, she applied archival science measuring, photographing and documenting the church, the findings of which she published at her own expense in 1984. The archaeologist Ragnhild Boström and the art historian Ann Catherine Bonnier are just some academics who have evaluated this as a first-class publication which was ahead of its time.

In the autumn of 1939 Berit Wallenberg was responsible for an archaeological excavation of four graves which lay under rocks which contained runic inscriptions in Skänninge. This was at the behest of Östergötland museum and the national heritage board. Throughout the years Berit Wallenberg also participated in digs primarily in the Stockholm area. She made extensive documentations, particularly during her own travels. Subsequently she gathered a considerable amount of photographic material concerning many old cultural heritage buildings and inhabited environments in Europe which had been destroyed during the Second World War. Her subsequent publication of the images she had collected, along with verbal descriptions, helped to safeguarding knowledge of this cultural inheritance for posterity. Berit Wallenberg donated thousands of images relating to cultural sites in Sweden and in Europe, as well as her own private images, to Riksantikvarieämbetet. This material has now been digitised and is accessible for research purposes.

Berit Wallenberg was frequently involved in various issues involving the local area around Lovö and Drottningholm, as well as within the church, all of which placed a serious demand on her time and her energy. This, combined with the petrol rationing and the fear of war meant that further travel in order to gather complementary and comparative material for her dissertation had to be postponed. Despite the delay to completing her academic work, it was important to Berit Wallenberg and she even had a protective site built to store her research materials. Meanwhile, in May 1942 she was informed by her professor, Johnny Roosval, that a male student was about to defend his thesis in the same subject. Although she served as a formal opponent at the viva she quietly felt the dissertation was just a reflection of her own ongoing work, which she had previously publicly summarised in seminars and at conferences. She viewed this development, which nowadays would be treated as academic plagiarism, as the end of her academic career, but nevertheless she successfully completed her role as opponent. At the same time Professor Johnny Roosval appointed Berit Wallenberg as a licentiate of art history, specialising in church frescos from the medieval and Vasa periods.

Professor Gerda Boëthius has criticised the manner in which Berit Wallenberg’s research was treated in the Konstvärlden journal, thereby initiating a debate on the subject. It was a matter of great distress to Berit Wallenberg that she was unable to gain a doctorate based on her many years of research and it also impacted on her future chances of gaining a permanent post within the cultural environment sphere and even within wider academia. So she turned to private research instead, all the while remaining an active firebrand within the local history movement. This activism led, amongst other things, to her appointment in 1940 as honorary member of the S:ta Ingrids Gille local history association in 1940.

In 1952 Berit Wallenberg was awarded the Illus quorum medal in recognition of her activities on behalf of protecting the cultural environment. She was also awarded a commendation by Samfundet för Hembygnadsvård (now Sveriges Hembygdsförbund) in respect of her non-profit efforts within the local history association. Two years later she was the sole woman to receive Upplands fornminnesförenings medal of service.

In 1955 she set up the Berit Wallenbergs Stiftelse, a foundation to promote research into art and cultural history, as well as the council Vetenskapsmannarådet to evaluate applications and to select the recipients for funds from the foundation. She further set up the art research institute Konstforskningsinstitutet in 1956, primarily to fund her own activities. For many years from 1958 onwards, Berit Wallenberg had her foundation prioritize funding for archaeological digs on Lovö awarded to the likes of Stockholm university, where Professor Greta Arwidsson was in charge. In 1960 Berit Wallenberg was elected as a member of Svenska Arkeologiska Samfundet, within which she became a founding member in 1963. Three years later, in 1966, she was elected as a corresponding member of Kungliga Vitterhets Historia och Antikvitets Akademien and in 1973 she was awarded the Hazelius medal in silver by Nordiska museet.

Berit Wallenberg was the only woman to be promoted honorary doctor of philosophy at Stockholm university. She viewed this as a form of compensation for having been prevented from formally defending her dissertation.

Berit Wallenberg never married. Her private life was formed by the three pillars of family, relatives, and her religious faith. She was an active lay preacher, wrote newspaper columns and cantatas and her social circle included current spiritual leaders. She dedicated her professional life to research, local history, and safeguarding heritage in various guises. She was the one who discovered the self-portrait of the medieval church painter Albertus Pictor in Lid church. Through her foundation she supported archaeologists, art historians, and even cultural heritage institutions. It was scientific knowledge, the Christian faith, and working with local history primarily around Drottningholm and Lovö which were the most important aspects of her life.

Some of Berit Wallenberg’s close friends came to play a vital role in her professional as well as private life. Among these were the dean Gustaf Bruncrona, the author Stina Ridderstad and the art museum superintendent Gerda Boëthius. During her student years, she got to know the later county custodian of antiquities and professor of archaeology Greta Arwidsson and the curator and art historian Agnes Geijer, whose friendship endured for the rest of her life.

Berit Wallenberg died on 4 September 1995. She was buried on 14 September in Lovö church by the priest Lars Djerf. He later wrote her biography, published in 2003. She was buried, as many of her family had been, at the Malmvik burial mound on her beloved Lovö. 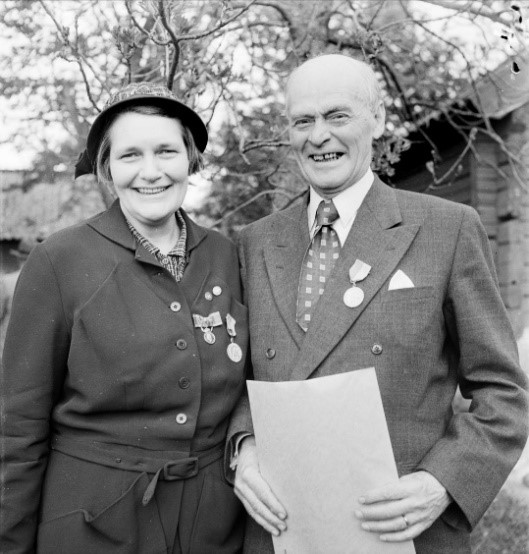