Bibi Andersson was one of Sweden’s foremost actresses and one of the internationally best known. She appeared in about one hundred film and TV productions and also in numerous theatre productions.

Growing up in Stockholm gave Bibi Andersson access to a broad range of cultural education in both film and theatre. As well as roles in children’s theatre, school productions and folk park theatre, she was engaged early on as an extra in film productions at the Filmstaden studios. She also studied at Gösta Terserus’ theatre school, one of the best-reputed theatre schools in the 1940s and 1950s, and she attended the Dramaten theatre school in 1954—1956. In 1936, before matriculating, she moved to the Malmö city theatre with her partner at that time, Ingmar Bergman, who had been appointed as the theatre’s artistic leader. In 1959, she returned to Dramaten where she remained until her retirement in 1996.

At the beginning of the 1950s, Bibi Andersson played several smaller roles in Swedish films like among others Ubåt 39 in 1952, directed by Hampe Faustman, and Dum-Bom in 1953, Nils Poppe’s last full-length film in the series about the popular figure Fabian Bom. She also played in one of Ingmar Bergman’s film advertisements for Bris soap (1953), and also appeared along with Edvard Persson in A Night at Glimmingehus in 1954. However, it was during the second half of the 1950s that she had her great break-through in a couple of films by Ingmar Bergman that were eventually to make her internationally famous. One was the dual role in Wild Strawberries in 1957, in which she played Sara, a young woman in the story’s present but also in its past, in the elderly main character’s memory. The other role was as Mia, the Mary-like young mother in the travelling company of clowns in The Seventh Seal in 1957.

The film producer Bengt Forslund has pointed out that the most common description of Bibi Andersson’s role characterisations at that time was that they were “enchanting”. Her earlier roles were quite rightly distinguished by a kind of type-casting. In her autobiography A Moment (Ett ögonblick) from 1996, she says about her role in Wild Strawberries that she felt like “a cliché of a young girl, I’d never been that bloody young!” Ingénue roles also dogged her at the theatre, where she played Little Karin (Karin Månsdotter) in Strindberg’s Erik XIV in 1956, the housemaid Stina in Värmlänningarna in 1958, and Sagan in Hjalmar Bergman’s play with the same name in 1958. Critics of the time perceived her as by turns ethereally poetic or down to earth and plucky in an innocently girlish way. To quote the theatre critic Henrik Sjögren, in her characterisation of Little Karin she appeared as “the romantic heroine of a folk song, melancholy and trembling delightfully, a simple girl and a straightforwardly loving creature”, and about Sagan he wrote that she was “a romantically forest-fairy-green maiden with a naïve fairy-tale tone in which a cheeky irony could also beam forth”.

This is where it seems a good idea once again to quote Bibi Andersson herself, as she wrote in her autobiography: “I loved to listen to all the talk about casting, often with quite blunt comments […] and I shuddered to think of the day when I would fall from grace. That created an anxiety in me and I learned to see myself from without, as one of that row of actors that producers and directors discussed as though they were bookmarks.”

The 1960s involved more important assignments. At Dramaten in 1964 she played the main female role of Maggie in Arthur Miller’s After the Fall. The year after she played the young wife Honey in Edward Albee’s Who’s Afraid of Virginia Woolf?, and in 1966 Agnès in Molière’s L’École des femmes. On film she also played several famous roles. One was in Vilgot Sjöman’s debut film The Mistress in 1962, that brought her the actor prize at the Berlin film festival in 1963. Jörn Donner wrote about this role in the major Swedish daily newspaper Dagens Nyheter that she had “grown out of the young girl role she had carried to the real heights of her talent. She creates one of the most direct women’s portraits in Swedish film […] She is living, intimate, genuine in every detail.”

Perhaps Bibi Andersson’s most memorable achievement in the film of those days was the role of the nurse Alma in Ingmar Bergman’s Persona in 1966. Here she stands for all verbal expression throughout the film since her opposite number, played by Liv Ullmann, is dumb. Not surprisingly, this brought her several awards including the Swedish Guldbagge Award and a number of international prizes. Other notable film roles during the 1960s were in Vilgot Sjöman’s My Sister, My Love in 1966, Mai Zetterling’s internationally acclaimed The Girls in 1968, and Ingmar Bergman’s The Passion of Anna in 1969.

These roles contributed without any doubt to Bibi Andersson’s international film career during the 1970s. She had the opportunity of being cast together with Orson Welles and Paul Newman a well as Steve McQueen, but even so this career must be described as uneven and chequered. It came to include everything from films by American authors such as John Houston (The Kremlin Letter, in 1970) and Robert Altman (Quintet, in 1979) to popular genres such as westerns (Duel at Diablo, in 1966) and the catastrophe film (The Concorde - Airport 79, in 1979). From a qualitative point of view, her most eminent non-Swedish film did not turn up until the following decade, with a supporting role in Danish Gabriel Axel’s Oscar-winning Babette’s Feast, in 1987.

Bibi Andersson spent the 1970s in Sweden as well, where she was appointed to TV Theatre on Swedish Television. In 1976, she took part in the miniseries En dåres försvarstal based on Strindberg’s autobiographical novel (The Defence of a Fool). Under the direction of her then-husband Kjell Grede, she played the role of Siri von Essen. She played the same role in a production of Per Olov Enquist’s The Night of the Tribades on Broadway, with Max von Sydow as Strindberg. She also played a number of acclaimed roles for TV Theatre in the 1980s, among them Blanche DuBois in A Streetcar Named Desire in 1981, directed by Bo Widerberg; and in Creditors in 1988, directed by Stefan Böhm.

During the 1980s, Bibi Andersson was again praised for a large number of roles at Dramaten. One was as Mary, the mother in Eugene O’Neill’s Long Day’s Journey into Night in Ingmar Bergman’s much acclaimed production in 1988. Another was the main role in Wilhelm Carlsson’s production of Friedrich Schiller’s Maria Stuart in 1989. A few years later, in 1994, she played one of the foremost female parts in Bergman’s lavish and magnificent production of Shakespeare’s A Winter’s Tale at Dramaten.

The 1990s also brought with them other undertakings. It was then that Bibi Andersson herself produced True West by Sam Shepard in 1990 and Efter orgiet by Suzanne Brøgger in 1991. Around that time she was also writing her autobiography, A Moment, that was published by Norstedts förlag in 1996. Additionally, she cooperated with her colleagues Harriet Andersson and Gunnel Lindblom in Christina Olofson’s documentary about Mai Zetterling, I rollerna tre in 1996. In 1982, Bibi Andersson took the initiative to the peace association Artister för fred and the following decades involved a certain amount of political work apart from her acting, not least via the foundation Open Road Stockholm-Sarajevo started in the 1990s to rebuild cultural life in the war-torn city.

During the 2000s, Bibi Andersson returned to Swedish film, and no fewer than three of her supporting roles receiving Guldbagge awards. The first was in Måns Herngren’s and Hannes Holm’s Det blir aldrig som man tänkt sig in 2000, and the second in Klaus Härö’s Elina: As if I wasn't there in 2003. The third was for her role as abbess in the first of the films based on Jan Guillou’s books on the fictional crusader Arn Magnusson, Arn: The Knight Templar, in 2007. She played the same role in the sequel Arn: Birth of the Kingdom, in 2008.

With these three awards as well as the Guldbagge Award for Persona, Bibi Andersson is the person who has received most Guldbagge Awards in the Actor category. 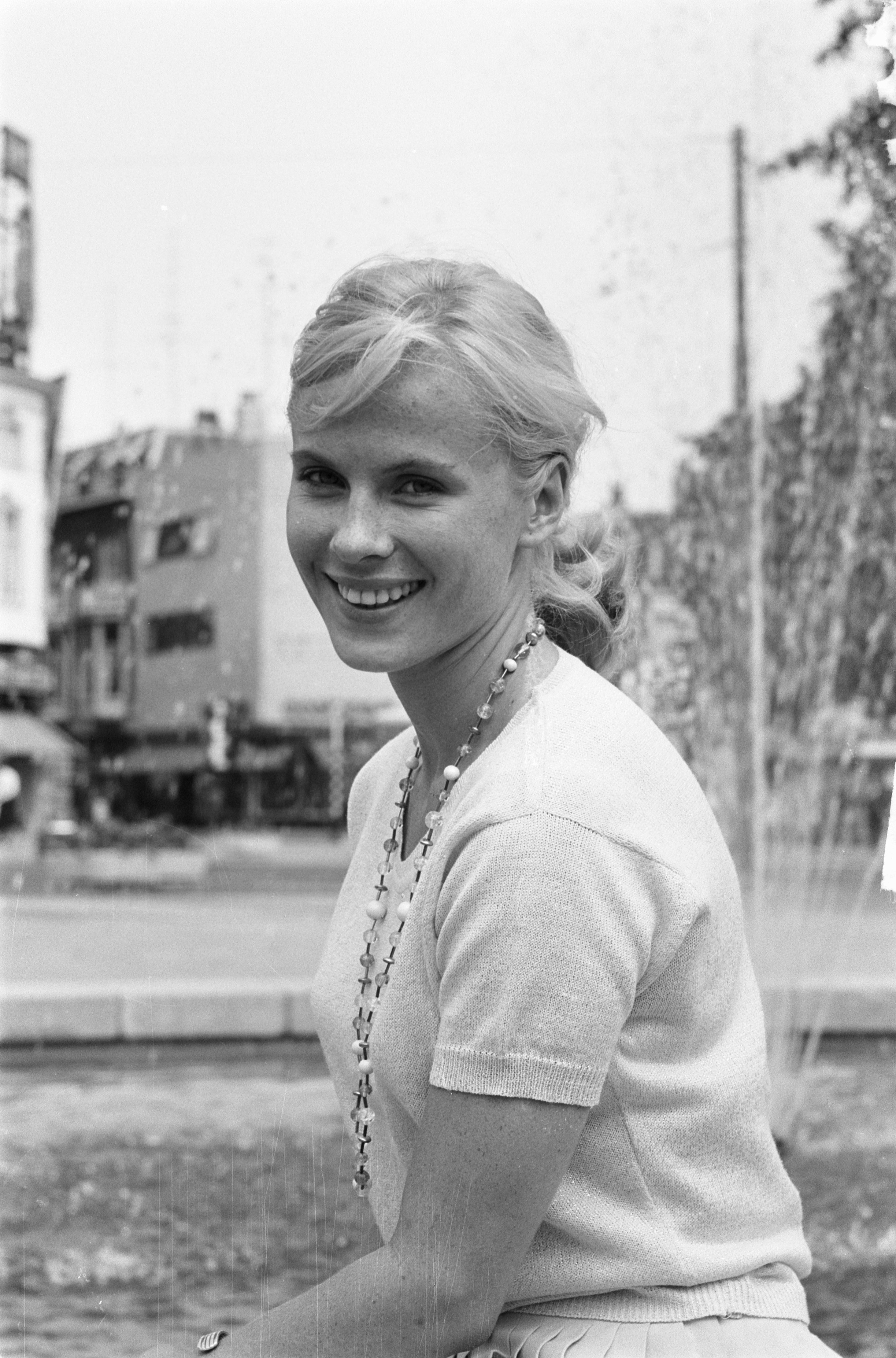