Anna Roos was a Christian feminist and social worker. She held leading positions in the YWCA and the women’s mission movement and was an early advocate of women clergy.

Anna Roos grew up in a culturally interested middle-class family in Stockholm. Her older sister was the author Mathilda Roos. The sisters were given a good education, first with a private tutor and later as pupils at the Åhlinska school. As a young person, Anna Roos lived the traditional life of middle-class girls and spent her time on culture, social life and entertainment. At the same time, she longed to be useful and with her sister she started among other things a needlework school for poor children. At the age of 25, she was employed by the insurance company Skandia.

Like her sister, Anna Roos was active in the women’s movement and engaged in the newly started Fredrika-Bremer-Förbundet of which she was made secretary. She was for women’s suffrage and women’s political eligibility and considered that all professions should be accessible to women. In the mid-1880s, she went through a period of spiritual searching and came in contact with the mission movement’s Fredda Hammar, which led to her conversion. She left her middle-class life and its comforts and found her real vocation in Christian social work. Through Fredda Hammar, she came in contact with the YWCA and was given her first assignment of leading meetings for girls working in factories.

Through financial support from an anonymous friend, Anna Roos was given the opportunity of dedicating all her time to social work. During the years she had several leading positions in the YWCA, among others as chairperson for the association board. Under her leadership, the enterprise expanded. She started local associations all over the country, arranged discussions about current affairs and meetings for women from different trades and professions. She also organised the acquisition of a YWCA house in Stockholm. For seventeen years, she was the editor of the YWCA magazine Hemåt started by her sister.

Anna Roos was also active in the mission movement and in 1894 she started the association Kvinnliga missionsarbetare (KMA) with Fredda Hammar. The aim was to send out women on missionary assignments and also to organise women in Sweden to support the mission. Her deepest engagement was however for prostituted women, the so-called “women who have strayed”. She pursued this issue in both the YWCA and the international Women’s Christian Temperance Union. According to the arguments of the time, prostitution and drinking belonged together, the “twin sins” that must be combatted together. The WCTU also strove to abolish the regulation system for prostitution. The issue was highly in focus in the general discussion, and several protest meetings, documents and committees were organised. Among others were the Kvinnokommittéen of which Anna Roos was an active vice chairwoman and the Kvinnornas abolitionistkommitté of which she was elected chairwoman.

The struggle against prostitution and the white slave trade were central for Christian women’s organisations and the international feminist movement. Raising social morality, specifically men’s sexual morality, was included in the women’s struggle. An equal society without the suppression of women was an impossibility as long as women were exploited sexually. Anna Roos and many others were concerned that Christian values and ideals were in the process of being displaced by a materialist world view.

Anna Roos had both deep faith and a strong engagement. Many sought her support in spiritual issues. During the first world war, she organised warm, cosy premises for thousands of adults and children. She participated in her friend Maria Winqvist’s work on a protected home for women and the small farming colony Emmaus.

When her sister died, Anna Roos had a YWCA rest home for women opened in her sister’s house in Stocksund: Sagaro rest home. This rest home was also her own last home. She died in 1927, at 72 years of age. 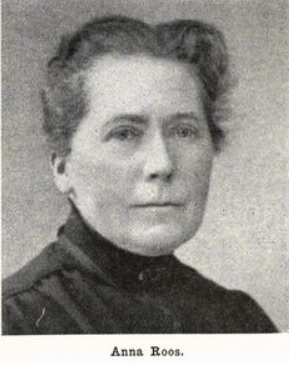