Amanda Maier-Röntgen was the first woman to gain her music-director qualifications in Sweden. She went on to compose and to play the violin across much of Europe.

Amanda Maier-Röntgen was born in Landskrona on 20 February 1853. She was the daughter of Elisabeth Maier, née Sjöbeck, and Carl Eduard Maier. Her father – just like his father before him – was a music director. Amanda Maier-Röntgen was musically trained by her father until she was accepted at Kungliga Musikkonservatoriet (later Kungliga Musikhögskolan, royal college of music) in 1869. Initially her main instrument was the organ, but it was as a violinist and composer that she made her career. In 1872 Amanda Maier-Röntgen became the first woman, having earned top marks in almost all her subjects, to be awarded the degree of music director. This entailed proving that she could play most instruments, including wind instruments. This was a rare skill amongst women but served her well for her future musical compositions.

Amanda Maier-Röntgen’s trailblazing achievement was duly written up by the press. Indeed, her compositions Fantasie and Romans in D-minor were selected to serve as the Swedish submission to the World’s Fair held in Vienna in 1873. Armed with these successes Amanda Maier-Röntgen applied that same year for the prestigious post of organist at Storkyrkan church in Stockholm. Although she was not appointed she nevertheless made it to the top three finalists. With the help of a stipend received from the Royal Swedish Academy of Music she was instead able to continue her studies in musical composition and the violin in Leipzig, where, for a three year period, she took private lessons with prominent teachers at the prestigious conservatory. Some of these teachers included Carl Reinecke and Engelbert Röntgen. The Swedish press continued to report on her career, noting further awards of stipends to fund studies and musical development.

Amanda Maier-Röntgen made regular tours of Scandinavia, Russia and Germany, often in the company of her friends Louise Pyk, a soprano, and the pianist Augusta Kjellander. In 1875 Amanda Maier-Röntgen and her piano trio performed at Gewandthaus i Leipzig and on 10 December that same year she gave the first-ever performance of her violin concerto in Halle. She played it again in February 1876 at Gewandthaus and in November that year she was at Kungliga Teatern (royal theatre) in Stockholm, performing with the royal orchestra Kungliga Hovkapellet, conducted by Ludvig Norman. Her violin concerto then for a long time fell out of the performing repertoire but, following a reconstruction using surviving sheet music, it enjoyed a second premiere in Stockholm in 2015 at the hands of the soloist Claudia Bonfiglioli.

In 1877 Amanda Maier-Röntgen submitted her sonata Lite vild to Musikaliska Konstföreningen which at that time ran an entirely anonymous publishing competition. Her piece was selected as the only work that year to be commended for its “lively, freshly inventive nature put to good effect”. The association’s jury panel suggested, however, that she rewrite the second movement. However, she stood her ground and requested that the piece be printed unchanged and so it came to pass in 1878. In an article commemorating Amanda Maier-Röntgen, printed in the Idun journal in 1896, her violin concerto is highlighted as “well-known to most violinists” and the piece is still played within Swedish chamber music circles today.

In 1880 Amanda Maier-Röntgen married Julius Röntgen, the son of her teacher from Leipzig. The couple moved to Amsterdam the same year that they were married. As was the norm for most married women at this time, Amanda Maier-Röntgen’s options to play music and to hear her own compositions performed became restricted to the home-based musical salon. The couple’s home became an important focal point of Amsterdam’s cultural life and many of the contemporary musical figures frequented their salon. She had become good friends with Edvard and Nina Grieg during her time in Leipzig and she was also very friendly with the pianists and composers Clara Schumann and Elisabeth von Herzogenberg.

The final seven years of Amanda Maier-Röntgen’s life saw a rapid deterioration of her lungs and she had to periodically spend time in Nice and Davos in the hopes of ameliorating her poor health. During this time she primarily focused on educating her two sons, who both went on to become musicians. There were odd occasions when she was able to give public performances. She died, at her home in Amsterdam, in 1894, aged just 41.

No complete list of Amanda Maier-Röntgen’s works exists yet as many remain to be rediscovered. However, further to the above-mentioned works, some of her already published pieces include: Piano quartet, 1891, Piano trio, 1874, 25 Preludes for piano, 1869, Six pieces for piano and violin, 1879, Schwedische Weisen und Tänze for violin and piano, 1882, a string quartet and the four songs – Aftonklockan, Den sjuka flickans sång, Sången, and Ungt mod, from 1878, all of which had lyrics written by Carl David af Wirsén. 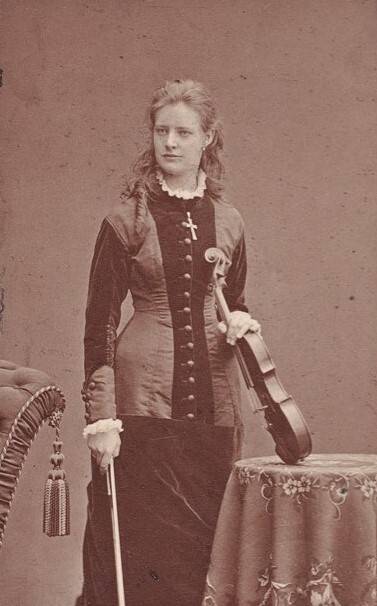