Wilhelmina Skogh was a pioneer of the hotel- and tourist industry.

Wilhelmina Skogh was born on Gotland in 1850. She was the daughter of school-teacher Jacob Wahlgren and Stina Lena Brogren. After Wilhelmina Skogh’s father died by drowning in 1856 she then went to live with her maternal grandmother who brought her up. Aged only 12 years old Wilhelmina Skogh, on her own initiative and alone, travelled from Gotland to Stockholm by steamboat. Once in the capital city she found employment as a nanny. On her way to and from work she would pass the Strömparterren restaurant below Norrbro every day. This was one of the finest restaurants in Stockholm at that time and Wilhelmina Skogh was determined to get a job there. She finally succeeded in this in 1863 when the restaurant took her on as a dish-washer. She worked for up to 16 hours a day. She seemed unperturbed by the hard work and long work-hours and it wasn’t long before the restaurant owner, August Davidsson, began to notice her and began to promote her within the establishment.

When Wilhelmina Skogh was 25 years old she left Stockholm and headed for Gävle, then a fledgling town within the timber industry. There she began to work as a cashier at Stadshotellet. In the evenings she studied languages and book-keeping. One evening a man came into the hotel and requested a room and a meal. When Wilhelmina Skogh realised that all the rooms were fully booked and that the restaurant had closed for the day she allowed him to use her room and made him a sandwich. This decision proved beneficial to her a year later when she was applying for a job which entailed running the railway station restaurant in Storvik. The very man she had helped out at the Gävle Stadshotell was in fact the director general of the Statens Järnvägar (SJ) (state railway) which owned the restaurant.

By 1876 Wilhelmina Skogh had amassed enough capital and found enough willing investors to allow her to have her own hotel built in Storvik. That same year she also established the company AB Wilhelmina Wahlgren which, in 1884, acquired the railway station hotel in Bollnäs. The head of the Gävle-Dala Järnväg was so impressed by her entrepreneurial flair and the way she ran her business that she was asked to take over the management of the Rättvik tourist hotel. Wilhelmina Skogh accepted the offer whilst at the same time running the Gävle Stadshotel where she had once been an employee. In 1888 she married the wine merchant Per Samuel Skogh.

Wilhelmina Skogh did much more than just manage the daily running of her hotels: she developed what was then an emerging Swedish tourist industry. She installed running water and electrical supplies at the railway station hotels in Storvik and Bollnäs, considered ‘modcons’ at that time and hardly taken for granted. Further, she leased large areas in order to offer hunting and fishing tours, thereby giving rise to adventure-tourism in Sweden. She had also been able to forge a contract with the world-renowned Cooks travel agent in London through her hotels. She also undertook a lot of travels in Europe in order to gain inspiration for further hotel developments.

Ahead of the 1897 Stockholm exhibition Wilhelmina Skogh was entrusted by the exhibition committee with managing the organisation of six large residential buildings on Strandvägen in Stockholm which would provide hotel accommodation during the exhibition. As with most of the things which Wilhelmina Skogh took on she completed this task with bravura, catching the eye of the management of the capital’s Grand Hôtel. Wilhelmina Skogh, the female hotel director from Gotland, was hand-selected by the Grand Hôtel’s management to run their establishment and from 1901 she did so with a focus on systematic order. Wilhelmina Skogh also oversaw the building of the Grand Hôtel Royal and its winter garden, completed by 1909. This hotel featured a large fountain and murals depicting Drottningholm castle and Visby in an effort to make visitors aware of the different attractions available in Sweden.

In 1910 Wilhelmina Skogh resigned, not entirely of her own volition, from her post as executive director of the Grand Hôtel. Times had changed: an economic crisis was at hand, guests had stopped visiting, and Wilhelmina Skogh shouldered the blame. She was, however, allowed to carry on living in one of the apartments within the neighbouring Bolinder palace, right next door to the hotel, until her death.

Wilhelmina Skogh died in Stockholm in 1926. She is buried at the Norra cemetery in Solna. 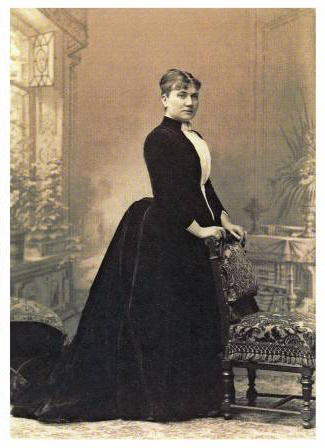