Victoria was born in Karlsruhe, Germany on 7 August 1862. She was the daughter of Grand Duke Frederick I of Baden and Princess Louise of Prussia. Victoria grew up at Karlsruhe castle. Summers were spent at Mainau castle near lake Boden and at St Moritz in Switzerland. She was educated, along with around fifteen other carefully selected girls, at a school at Karslruhe castle. Her mother exerted a lot of influence over Victoria’s childhood, which was characterised by a Spartan approach to child-rearing which involved simple food and a cold, fortifying bedroom. The latter was probably the cause of Victoria’s poor health causing her to suffer almost chronic breathing difficulties. Victoria was a talented linguist and she spoke both English and French. Later she very quickly learned to speak Swedish. She was also taught to paint and draw and eventually became an accomplished photographer. Most of her photographic work was, however, destroyed after her death. She was keen on music and well-known for being a good pianist, whose favourite composer was Richard Wagner.

In March 1881 the engagement between Victoria and the Swedish Crown Prince Gustaf was announced. They had met one week earlier and it is unclear whether they had been given the chance to be alone together prior to that. Their union was typical of the politically arranged marriages of the era as the crown prince’s father, King Oscar II, wanted to strengthen ties with the German Empire. Victoria’s maternal grandfather was Wilhelm I, German emperor and Prussian king. Her paternal grandmother was Princess Sofia Wilhelmina, daughter of the deposed King Gustav IV Adolf of Sweden. Thus a strong and desirable connection to the Swedish monarchy prior to the arrival of the Bernadotte family could be demonstrated. From a dynastic and political viewpoint this union was practically ideal.

The docent Oscar Alin, later professor Skytteanus at Uppsala, was appointed as Victoria’s Swedish-language instructor and history and political science teacher. As an academic and a political conservative politician Alin asserted the so-called ‘vassal-state’ view of the Norwegian-Swedish union which was not to be dissolved without Swedish permission. Alin successfully imparted this view to Victoria. King Oscar II himself also instructed his future daughter-in-law in Swedish history.

The royal marriage was held on 20 September 1881 in the chapel at Karlsruhe castle. Following a stately celebration the couple travelled to Victoria’s new homeland by train and boat, landing at Gothenburg, and receiving a stately welcome when they finally arrived in Stockholm. Victoria was now Crown Princess of Sweden and Norway. The Norwegian parliament, however, refused to raise the court appanage following the marriage.

Three sons were born during the early years of the marriage: Gustaf Adolf, Wilhelm, and Erik. Victoria apparently developed a certain aversion to her eldest son, Gustaf Adolf, which can at least in part be explained by his pro-British leanings. She also developed a certain distrust of both her husband’s and her eldest son’s willingness to allow their personal monarchic power to be comprised by principles of democracy and parliamentarianism.

Victoria’s second-eldest son, Wilhelm, was somewhat of a favourite child. Victoria also took in his eldest son Lennart after Wilhelm’s wife, the Russian Grand Duchess Maria Pavlovna, fled Sweden in 1914 and the couple subsequently divorced. Victoria’s third son, Erik, was never seen in public due to suffering from epilepsy and other health issues.

Victoria’s marriage to the Swedish Crown Prince was a far from happy one. The royal couple largely lived separately and had no interests in common. Victoria was sickly and from 1883 she spent lengthy periods of time away from Sweden visiting relatives in Germany or simply living in a warmer climate. It was evident that she was unhappy at the Swedish royal court. Victoria and Gustaf did, however, go on a lengthy trip to Egypt together in the winter of 1890–1891. The following winter Victoria returned to Egypt alone. Her travels abroad often involved Italy, primarily Villa Caprile in Anacapri on the island of Capri and Rome. In 1928 Victoria moved to the Italian capital, settling at what became known as Villa Svezia.

Victoria had a particularly close relationship with the court physician Axel Munthe which began in the early 1890s. They shared a lot of interests, primarily music and ancient cultures, and for a long time they lived near each other, both in Capri and in Rome. The nature of this relationship has been discussed by external observers and researchers and the extent of their friendship has been debated. Munthe, whose medical skills were questioned by Swedish medics, was an internationally renowned high-society physician. He seemingly never managed to either cure or relieve Victoria’s health problems.

The chief royal residence in Sweden was Stockholm palace although Tullgarn castle was used during the summers, albeit Victoria did not like its damp location. In the early 1900s Victoria’s parents paid for the construction of Solliden, near the ruins of Borgholm castle on Öland, to serve as her summer residence. The climate there was more favourable. The architect was Torben Grut although the villa was adapted, following Victoria’s instructions, to reflect the Italian style, inspired by Axel Munthe’s residence San Michele on the island of Capri.

Victoria’s interest in politics originated from a thoroughly conservative perspective. The ideal of a strong monarchy had characterised her childhood. However during her adult life, particularly in the country where she was queen, a democratising policy, general suffrage, and parliamentarianism were all introduced. Victoria tried to fight these tendencies in various ways. She viewed the breakup of the Scandinavian union as rebellion on the part of Norway. She is also considered to have played a confrontational driving role regarding the so-called 1914 “borggårdstal” (the Courtyard Speech delivered by King Gustav V to members of the Peasants’ estate). She entered into negotiations with conservative politicians behind the back of the current Prime Minister, Karl Staaf, who was a liberal. The king’s “Courtyard” speech, which had been written by Sven Hedin, was anti-government. Victoria ensured that no modifications were made to the speech against the wishes of her son the crown prince and Prince Eugen as well. The accession of the liberal and social democratic ministry under Nils Edén’s leadership was something she viewed as “leading this country to its ruin”.

Victoria was heavily involved in military issues and supported a strong national defence, particularly with regard to the navy. She felt strongly loyal to Germany and its emperor, indeed Wilhelm II was her cousin. He appointed her as honorary colonel of the 34th fusilier regiment in Stettin in 1908 and this was an honour she truly valued. She often spent time in Germany during the First World War. She tried to get Sweden allied with Germany during the war. Towards the end of the conflict she was in Karlsruhe and experienced Germany’s defeat, the dissolution of the German empire, and her brother’s abdication as the last Grand Duke of Baden. Although Victoria had definitive political views she was rarely in a position where she could implement her wishes. She tried to influence her husband who was willing to compromise but given her decision to burn all the correspondence between them it is hard to determine how successful she was. She was the last queen of Sweden who actively sought to exert political influence.

Victoria was also religiously active and from 1885 onwards Bishop Gottfrid Billing served as chief preacher to the royal court, also serving as her loyal spiritual carer. He, as a conservative politician, had many points in common with the queen. Victoria also engaged in social welfare matters and was active in various welfare organisations. Following the death of Queen Sofia in 1914 Victoria took over the direction of Sophiahemmet hospital. During the First World War she instigated the philanthropic Centralkommittén för samordnig av särskild hjälpverksamhet, which involved handing out seeds and carbide lamps to those in need. She also took particular interest in what she termed “the people of deserted Norrland” and supported the Norrbottens läns arbetsstugor project. The refuge Drottning Victorias sjuk- och lapphärbärge was opened in Karesuando in 1922. Also that year, on the occasion of Victoria’s 60th birthday, a special fundraiser was organised to provide money to establish rest-homes for women as well as domestic science and horticultural schools on Öland. Drottning Victorias Örlogshem was established in Karlskrona in 1908 in order to provide accommodation for the navy’s members. This establishment later moved to Stockholm.

Victoria’s health gradually began to fail and during the 1920s she increasingly spent time in Italy, where, on 4 April 1930 in Villa Svezia in Rome, she passed away. Her remains were transported to Sweden, the last stage of the journey of which was on board the Swedish naval coastal defence ship, the Drottning Victoria, which sailed from Swinemünde.

Victoria is buried at Riddarholmen church in Stockholm. 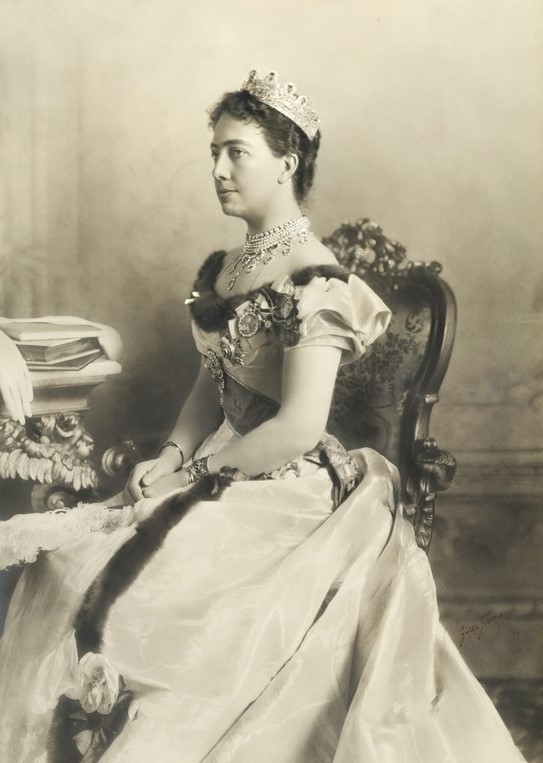