Valborg Olander was one of the two first women on Falun town council. She was also one of the leading forces of the women’s suffrage movement. However, she is best known for being one of Selma Lagerlöf’s close friends and secretaries.

Valborg Olander was born in 1861. She was the eldest daughter of Eva Charlotta Munktell and the local works physician Gustaf Olander. The couple had five children, three of whom were girls and the other two boys. The two boys died while young. Despite losing her father at an early point in her life, Valborg Olander gained a proper education as the eldest daughter. Valborg Olander’s mother opened a fashion shop in Ulricehamn following the death of her husband. Valborg Olander attended a girls’ school in Jönköping and then trained at Högre lärarinneseminariet (advanced teacher-training programme) in Stockholm. She graduated from that programme in 1879 aged just 18 years old.

Having gained her qualification Valborg Olander worked at Lidköping elementarläroverk för flickor (elementary school for girls) and then moved to Gothenburg, where she spent eight years teaching at Nya Elementarläroverket. This was just as Gustaf Cederschiöld, a linguist, was appointed director of the school. He was a pioneer of Swedish language instruction and was engaged in developing the teaching of the Swedish language. Cederschiöld’s efforts complemented Valborg Olander’s contributions as a young teacher and during the ensuing years they came to write several books together. The 1896 Svensk uppsatsskrivning, illustrated by Jenny Nyström, became a classic. Gustaf Cederschiöld and Valborg Olander understood the value of teaching essay-writing skills from an early age and thus simple preliminary exercises as well as writing in other subjects was taught from the second year onwards. They also understood how important essay-writing was as a means of developing independent thought in their students.

Göteborgs Kvinnoförening (women’s society of Gothenburg) was the first such women’s society to be established in the city 1884, during the period when Valborg Olander lived there. Many of the society’s early meetings focused on educational matters. At the 18 February 1885 meeting Valborg Olander presented an introduction in which she emphasised that young women should be allowed to read literature, and discuss and write essays instead of just studying grammar.

Despite the stimulating environment in Gothenburg Valborg Olander decided to accept a post as a junior lecturer at the Folkskoleseminariet (public school teacher-training programme) in Falun in order to be close to her mother who had taken on the family farm of Bengtsarfvet in 1890. Several of her maternal aunts also made their way back to their Dalarna home. Helena Munktell’s house called Furuhof, which looked out over the Silja, was completed in 1901, as was the artist Emma Sparre’s house called Solgården. Valborg Olander formed a rich social network in the surrounds of Furuhof and for many years her aunts’ homes served as meeting points for artists and authors.

At the Falun teacher-training programme Valborg Olander started off mainly teaching mathematics and natural sciences. She gradually came to focus on her favourite subject – her mother tongue – but found circumstances at the school to be challenging. This becomes apparent when reading between the lines of her commemorative speech given on the occasion of the 25th anniversary of the school. Whilst praising Henrik Åkerblom, the school’s history teacher, priest, and headmaster of many years’ standing while she worked there, she refers to his time in charge as “completely patriarchal”. Valborg Olander’s teaching efforts were appreciated both by her students and her colleagues. She formed personal relationships with her students and her home remained open for discussion evenings and other meetings.

Valborg Olander became a pro-women’s suffrage activist at an early point. She was behind the establishment of the Falun section of the Landsföreningen för kvinnans politiska rösträtt (national society for women’s suffrage), for which she served as chair from 1905–1920. She was also one of the first two women to serve on the Falun town council. She was active in the trade union and served as chair of the Sveriges seminarielärarförening (seminarium-teachers’ society of Sweden) from 1907-1912, and in other spheres too.

Selma Lagerlöf had moved to Falun in 1897 in order to be close to her sister Gerda and her family. Following the loss of Mårbacka the Lagerlöf siblings took it in turn having their mother, Louise, and their paternal aunt Lovisa, stay with them. During her early years in Falun Selma Lagerlöf’s social network was largely limited to her family. However, at a reception held at the county governor’s residence, she met Valborg Olander for the first time. They began to socialise together and Selma Lagerlöf found Valborg Olander to be a person with whom she could discuss literature and much more besides. From 1902 their relationship evolved into a romantic one. Valborg Olander increasingly provided Selma Lagerlöf with assistance in all sorts of matters. She would provide clean copy of her manuscripts, she would proofread and advise her on her writings. She responded to correspondence, took care of necessities and other practical matters. Nevertheless, towards the end of 1903 Valborg Olander grew tired of always coming second to Selma Lagerlöf’s new female friend, Sophie Elkan, and considered seeking employment in Stockholm. Selma Lagerlöf successfully managed to convince her to remain in Falun.

It was Valborg Olander who passed on a request from head-teacher Alfred Dalin – whom she had met at a Scandinavian schools meeting in Norway in 1901 – to Selma Lagerlöf regarding a contribution for a new geography textbook for the Swedish public schools. Valborg Olander was actively involved in developing the new textbook and later she published a handbook and supplementary annotated map. Despite all this, she was not allowed to accompany Selma Lagerlöf on her travels to Norrland which she undertook to gather material which would later form Nils Holgerssons underbara resa genom Sverige, published 1906–1907.

Following Selma Lagerlöf’s death Valborg Olander published, in 1941, a selection of correspondence which she had received from the late writer. There is no doubt, when reading the letters, that the relationship between the two women was a romantic one, and an intimately physical one at that.

Valborg Olander died in 1943. She is buried in her family grave at the Kopparberg cemetery. Her will clarified that most of her wealth was to be donated to a fund managed by Fredrika-Bremer-Förbundet (association). Any income was to be used to provide stipends for female students. 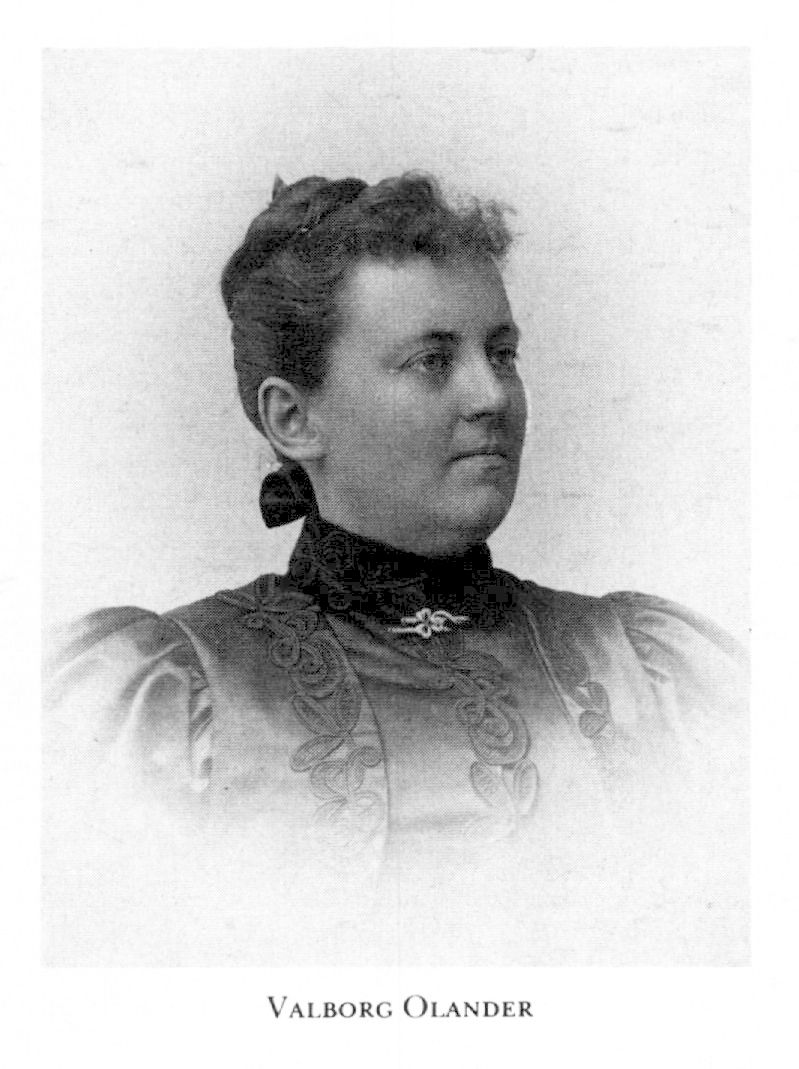