Ulrika Eleonora was a Danish princess who married Karl XI of Sweden and became Queen.

Ulrika Eleonora was born in 1656, the youngest child of the Danish King and Queen Fredrik III of Denmark and Sofia Amalia of Braunschweig-Lüneburg. According to established patterns of marriage in the Danish royal family, Ulrika Eleonora’s sisters were married into German princely houses while she herself according to her mother’s plans was to be queen of Sweden. Ulrika Eleonora seems early on to have been prepared for her future role. She was brought up with great care and spoke several languages fluently: Danish, German and French and eventually Swedish.

The marriage was intended to improve the relationship, marked by wars and conflicts, between the two neighbouring countries. After negotiations, Ulrika Eleonora and Karl XI were engaged to be married in 1675 and the Swedish delegation in Copenhagen had only praise for the Danish princess and her good upbringing. It was considered that her quiet and modest character would suit the Swedish king very well.

Shortly thereafter, war broke out again between Sweden and Denmark. However, both Karl XI and Ulrika Eleonora refused to break their engagement, despite several proposals and other offers of marriage. When peace was sealed in the autumn of 1679, the royal wedding was included in the peace agreement and in the rhetoric around the marriage it was pointed out that it was the couple’s “loving hearts” that were the victors of the war. In May 1680, the couple celebrated their wedding at Skottorp Manor outside Halmstad at an unusually damped-down ceremony considering the context, with only a few guests. On the other hand, Ulrika Eleonora’s entry into Stockholm and her coronation in November the same year were all the more lavish. The new queen’s arrival was thus to mark the elevated status and success of the monarchy. During her progress into Stockholm, the significance of the marriage was manifested for the unity between Denmark and Sweden and the good time to follow on the peace that had been agreed. Ulrika Eleonora was described as a “peace pledge”, which was a grateful theme, since queens by tradition are linked to peace and gentleness. Her motherly love, piety and charity were also emphasised during the magnificent procession. She was praised as a loving mother for her subjects as well as for the heirs with whom everyone hoped that Ulrika Eleonora would secure the succession and realm.

Since the beginning of the 1600s, there had been a shortage of royal heirs to the throne in Sweden. Neither Queen Kristina nor Karl XI had any siblings and neither of them had come of age when their respective fathers died. That meant that a regency council had to govern the realm for longer periods of time, which in turn meant that the aristocracy in council were able to move their positions forward at the cost of the monarch’s power. Thus it was of great importance to the future of the dynasty that the new queen was fruitful, since a strong monarchy craved the continuity of its dynasty. Ulrika Eleonora lived up to expectations and the royal family grew for seven years with five sons and two daughters. However, in the course of only two years in the mid-1680s, the family was afflicted severely when four of the princes died in infancy. Only Karl (XII), Hedvig Sofia and Ulrika Eleonora the younger survived to adulthood. The frequent childbirths and probably several miscarriages as well, not to mention the grief over losing her children, took their toll on the queen’s health. Ulrika Eleonora therefore began to live more and more in seclusion. Her existence in the royal family became complicated.

Contemporaries knew for a fact that the king and his mother, the widowed queen Hedvig Eleonora were very close, and that she had great influence over him. From the Danish side, it was hoped that Ulrika Eleonora would be able to take that place. Usually it was the queen who was married to the reigning king who had the highest rank. Hedvig Eleonora, who had been the first lady in the realm for a quarter of a century before Ulrika Eleonora became queen, had no intention of giving up her leading position. Karl XI took his mother’s side and also gave her the honorary title “dowager queen of the realm”. He also decided that her name should precede that of Ulrika Eleonora in the church’s prayer supplications. He motivated his decision with his mother’s regency during his minority.

Ulrika Eleonora was also treated with a certain suspicion at the Swedish court on account of her Danish background, even though she was and always remained irrefrangibly loyal to her husband and her new country. The tense relationship between Denmark and Holstein-Gottorp did nothing either to ease the relationship between the two queens. To the Danish messengers’ frustration, it was most often the queen who had to retreat in the face of her mother-in-law. However, Ulrika Eleonora still took action on issues that concerned the children, their educations and their future marriages. She was responsible for their upbringing, an important assignment in which she was strongly engaged. She was seen as being very involved, and her contemporaries noticed how much time she spent with her children and how she put a great deal of effort into their education in religion and also into training them to behave and be representative at the court. Ulrika Eleonora was interested in the theatre, masquerades and other entertainment at the relatively austere court. She supported artists and took lessons in painting, and also gave her daughters a similar upbringing to the one she herself had received, with its emphasis on education in religion, languages and aesthetic subjects.

Her contemporaries expected the queen to lead a representative life at court. Against that background, Ulrika Eleonora’s secluded life had also been a way to mark the fact that she had most often been expected to yield to her mother-in-law. The queen also pointed out that she was not interested in worldly honour, in accordance with the ideal that a true queen should be modest and not allow herself to be attracted by magnificence or pomp and circumstance about her person. Ulrika Eleonora was warmly religious and inspired by the pietist devotional movement. As a good Christian housewife and the mother of her country, a queen was expected to protect her subjects, to care for the poor and sick and to be a supplicant who through her prayers and pleas to the king influenced him to show grace and temper sentences and punishments.

Ulrika Eleonora’s engagement seems to have exceeded expectations of her as queen. Her accounts show that her charitable work was extensive and that she had founded several institutions and given support to many private persons and enterprises. She aided various parts of the kingdom with grain deliveries when there was starvation there. At Karlberg Castle, she started among other things an orphanage and a weaving school where poor children could learn a trade. One institution that she founded, Drottninghuset in Stockholm, a home for older women, is still running the same enterprise in the same place as it has done since 1689.

After having struggled against serious health problems for several years, Ulrika Eleonora took a turn for the worse in the winter of 1692–1693. At the beginning of the summer in 1693, she moved out to her favourite residence, Karlberg Castle, where she died at the end of July the same year, at only 36 years of age. Karl XI took care of her towards the end and people around him noted his profound grief upon her death.

It was a much loved and respected queen who was borne to her final resting place. Ulrika Eleonora desired a simple funeral so that the money could go instead to the poor. The king wanted a magnificent ceremony worthy of her position, and the funeral, that like her entry into Stockholm in 1680 was organised by Nicodemus Tessin the younger, in Riddarholmskyrkan, was both magnificent and lavish. In memory of the queen, large sums of money were also donated to charitable ends. Ulrika Eleonora was for her contemporaries as well as posterity a symbol of the dutiful, self-sacrificing, faithful wife and loving mother both for her own children and her subjects, and the picture drawn of her in historiography is bright. She is described as a model for future queens. 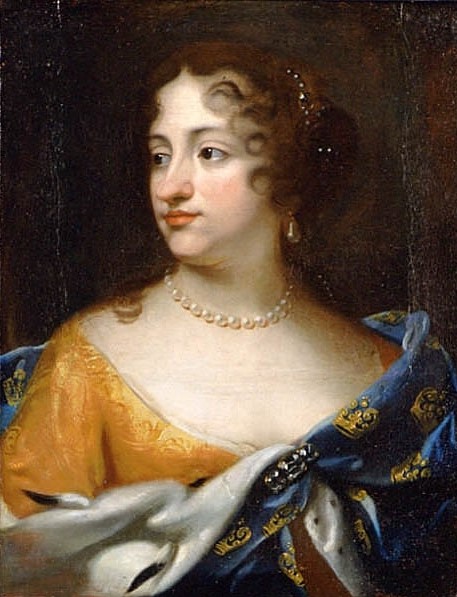