Tekla Nordström was the leading Swedish xylographic reproducer of art just as impressionism emerged as an art movement.

Tekla Nordström grew up in Stockholm. Her father was a factory worker who died young. Despite this her mother was able to provide comfortably for her children. In 1872 Tekla Nordström was accepted into Slöjdskolan (the handicrafts school) where Carolina Weidenhayn was the main xylography instructor. Following placements with first Jonas Engberg and then Wilhelm Meyer, Tekla Nordström received a stipend in 1878 which allowed her to study in Paris with Auguste Trichon. Her commissions from magazines and publishers began to increase in number and in 1885 she received honourable mention at the Paris salon. From 1882 onwards she split her time between Paris and the artists’ colony at Grez-sur-Loing, where the artist Karl Nordström also lived.

Xylography, much like photography, telephony, and telegraphy, all had a part to play in women’s emancipation of the 1800s: these skills enabled women to develop independent careers and become entrepreneurs. Xylographers could gain employment at studios run by illustrated magazines, but the majority worked for themselves as the time-intensive work could be done at home. Tekla Nordström was part of the small group of female xylographers who became prominent in Sweden during the short-lived but influential period this technique enjoyed.

Tekla Nordström became noted for her engravings of painted art, as well as for the engraving of technical images such as scientific illustrations which also formed part of her profession. She received considerable numbers of commissions from the Albert Bonniers Förlag (publishers) for their 1883–1884 edition of Zacharia Topelius’ Fältskärns berättelser, which was richly illustrated by Carl Larsson. She also produced xylographs of Carl Larsson’s illustrations for the magnificent edition of Anna Maria Lenngren’s 1884 Samlade skaldeförsök. In the latter Tekla Nordström revealed her mature expertise as a so-called ‘peintre-graveur’, which referred to the engraver’s replacement of the strict linear syntax of xylography with a freer style of expression which was influenced by an impressionist-style use of light and image construction.

During the 1890s Tekla Nordström came increasingly to dedicate herself to engraving the work of contemporary artists, particularly those from within the Konstnärsförbundet circle, for the Bonnier folk calendar Svea, but also for exhibitions and catalogues. Her eyesight began to deteriorate during that decade and so she took up photography instead. She mainly worked as a supervisor and source of inspiration for the new generation of artists who in 1912 established the Föreningen Original-Träsnitt (original woodcut) and who considered wood-engraving to be a medium of original art rather than a form of artistic reproduction. As a mentor of young artists Tekla Nordström became a transmission link between the woodcut era of the 1800s and the modernist woodcut movement of the 1900s.

Tekla Nordström died in 1937. She is buried at the Norra cemetery in Solna. 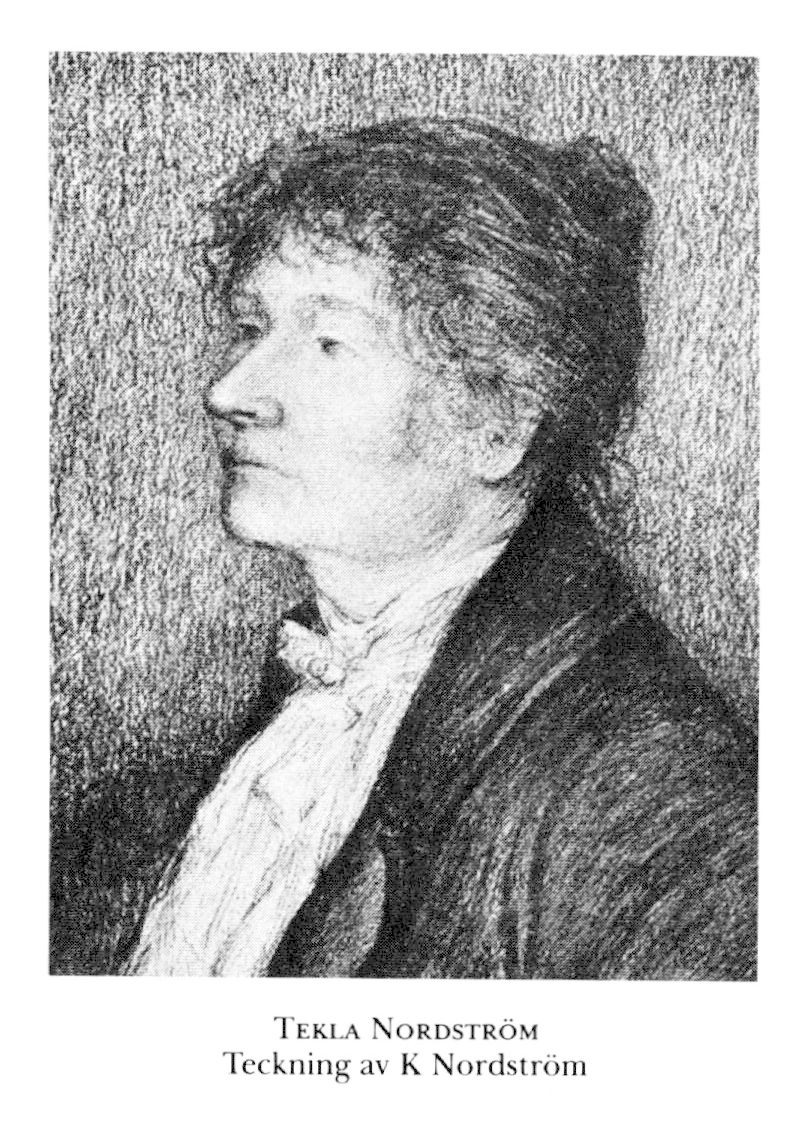