Sophie von Knorring was the author of a series of upper-class portrayals from the female perspective. She made significant contributions to the development of the Swedish novel during the 1830s and 1840s.

Sophie von Knorring was born in 1797. She grew up within an upper-class environment in Västergötland. Her father, Christer Göran Zelow, was a major and ‘hovmarskalk’ (chamberlain of the royal household). Through his marriage to Helena Sophia Gripenstedt it fell to him to run the entailed estate of Gräfsnäs near Alingsås. It was there that Sophie von Knorring spent her childhood and the social milieu of Gräfsnäs made a lasting impression on her. The family moved to their property of Högärdet near Vänersborg in 1808.

For Sophie von Knorring the period of 1810–1813 proved decisive with regard to the direction her life took. It was then that she, her mother and four younger sisters lived in Stockholm so that they could be educated in a socially appropriate manner and have the opportunity to develop their skills. Their schedules comprised languages, singing, music, painting, and dance. They made full use of the city’s theatrical offerings, of which Madame de Staël’s visit to Stockholm in 1812 was particularly memorable for Sophie who even met de Staël in person. Sophie von Knorring would later depict this experience of high society in her 1836 account entitled Illusionerna, for example.

An economic recession set in just as Sophie von Knorring and her sisters were being educated and prepared for their future lives as domestic wives. This led to a worsening of her father’s financial affairs as a land-owner. The Zelow family was forced to live in straightened economic conditions for the foreseeable future.

Sophie von Knorring was beautiful and there was no shortage of potential suitors for her hand in marriage. She finally accepted the proposal of Baron and Colonel Sebastian Carl von Knorring, who was eight years her senior. They married in 1820. Although theirs was no passionate love story, over time love developed between them. Due to her father’s ill-health – following a stroke – and her family’s continued straightened finances it was decided that the wedding would be quietly celebrated at her family home. The following year the newlyweds moved to von Knorring’s official residence of Friggesby near Tidan. In November their only child, a daughter they named Ebba, was born. Sophie had also used this name as the title of her first and unpublished attempt at writing a novel.

Sophie von Knorring settled very happily at Friggesby. However, her time at Friggesby was filled with the hard everyday work of running an estate as her husband was not a wealthy man. It was not unusual for them to frequently run low on food and money. Certain well-needed breaks from the everyday toil occurred in the form of travels to her parental home or visits to friends among the Västgöta rural society. The major’s residence of Ärtekärr, to which the family moved in 1827, was less appealing. It was situated quite deep into the forest. Sophie von Knorring attempted to cultivate this wilderness by planting trees and furnishing the garden with bowers and seating areas. These came in useful later as she began to suffer from a lung infection which developed into a long and finally terminal case of tuberculosis.

Sophie von Knorring’s career as an author officially began with the publication of her novel called Cousinerna in 1834. She had sent a speculative request to Lars Johan Hierta, who rejected the option of publishing it. It was instead Zacharias Haeggström publishers who took it on. Her loyal friend Baron August Reinhold Mannerheim served as the messenger between Sophie von Knorring and the Stockholm publishers. This novel gained a mixed reception in the literary journals.

At this point in time Fredrika Bremer was clearly the shining star of Swedish family novels. Sophie von Knorring was a different kind of author, however. Her pen was guided by inspiration, feelings, spirit, and wit. Whilst Fredrika Bremer’s style resembled that of the British family novel, Sophie von Knorring was inspired by continental social commentary novels marked by vanity and ardour. She paired this with an awareness of situations and details from her everyday. This kind of writing style initially seemed more challenging, dangerous, and unconventional to the critics. The literary historian Åsa Arping has meticulously analysed how Sophie von Knorring used the masculine cover of anonymity and adopted the disguise of different roles in order to manage the criticism she received with regard to her feminine worth.

Following her debut Sophie von Knorring released a series of Swedish originals: Vännerna, in 1835, and Qvinnorna, Axel, and the aforementioned Illusionerna, all in 1836. They were set largely in the salons of the capital city and countryside manors, and often bore the theme of having to choose between duty and love. Sophie von Knorring’s social novels represent the closest Swedish literature has ever come to the likes of Jane Austen’s work.

Sophie von Knorring’s work changed course from the publication of the three-volume work Stånds-paralleler in 1838. Here the spotlight falls on the relationships between the various social strata of rural society. The baroness’ affinity for the local population was, however, dependent on an intrinsic tension as she saw to it that her aristocratic values were promoted whilst she also portrayed the ordinary folk. She had been influenced by the general tendency within literature of depicting popular environments but she had no intention of enlightening the peasantry. She was, however, from her exalted position able to direct criticism toward the nobility for their harassing behaviour.

The same year that Stånds-paralleler was published Sophie von Knorring released Tante Lisbeths 19:de testamente, which should be treated as a light-hearted intermediary work. As was fashionable at the time she began to produce shorter stories, which were collated in two collections called Skizzer (1-2) and published in 1841 and 1845. She made a bigger impact with Torparen och hans omgifning. En skildring ur folklifvet, a comprehensive three-volume work published in 1843. Here we see an ambitious attempt at portraying the lowest level of agricultural society through their own preconceptions and through the respect that conservative aristocrats had for simple and humble people. In the foreword Sophie von Knorring emphasised her desire to see the world through the eyes of an agricultural labourer. Thus she was able to realise Fredrika Bremer’s dream of writing a realistic novel about agricultural workers, which Bremer herself never successfully managed. The author took the side of the labourer against the haughty land-owning patron P. She had a talent for portraying ‘newly arrived’ bourgeoisie in a harshly ironic manner. In addition she depicted the debauchery of drunkenness at a time when the sobriety movement was just gaining ground.

One of Sophie von Knorring’s moral imperatives was to defend the permant insoluble nature of marriage, prompting the author C.J.L. Almqvist to oppose its presentation in Torparen. Here the collision with the newly emergent liberalism, which arose just as Sophie von Knorring was gazing backwards towards an aristocratic world which was dissolving, is apparent.

Sophie von Knorring’s last major novel, Förhoppningar, from 1843, was centred around the forbidden love between a widow and her step-son. This forbidden passion is portrayed using a psychological acuity, making this novel one of those most worth reading of all her books.

Just like Fredrika Bremer, and Emelie Flygare-Carlén, Sophie von Knorring’s work was fairly extensively translated into German, English, and French. Her novels have not, however, benefited from being re-released in new editions and thus have not gained a wider readership.

Sophie von Knorring’s last place of residence was the major’s house of Skålltorp near Axevalla moor, close to Skara. She died there in 1848 aged 50. She is buried at Skärf cemetery. 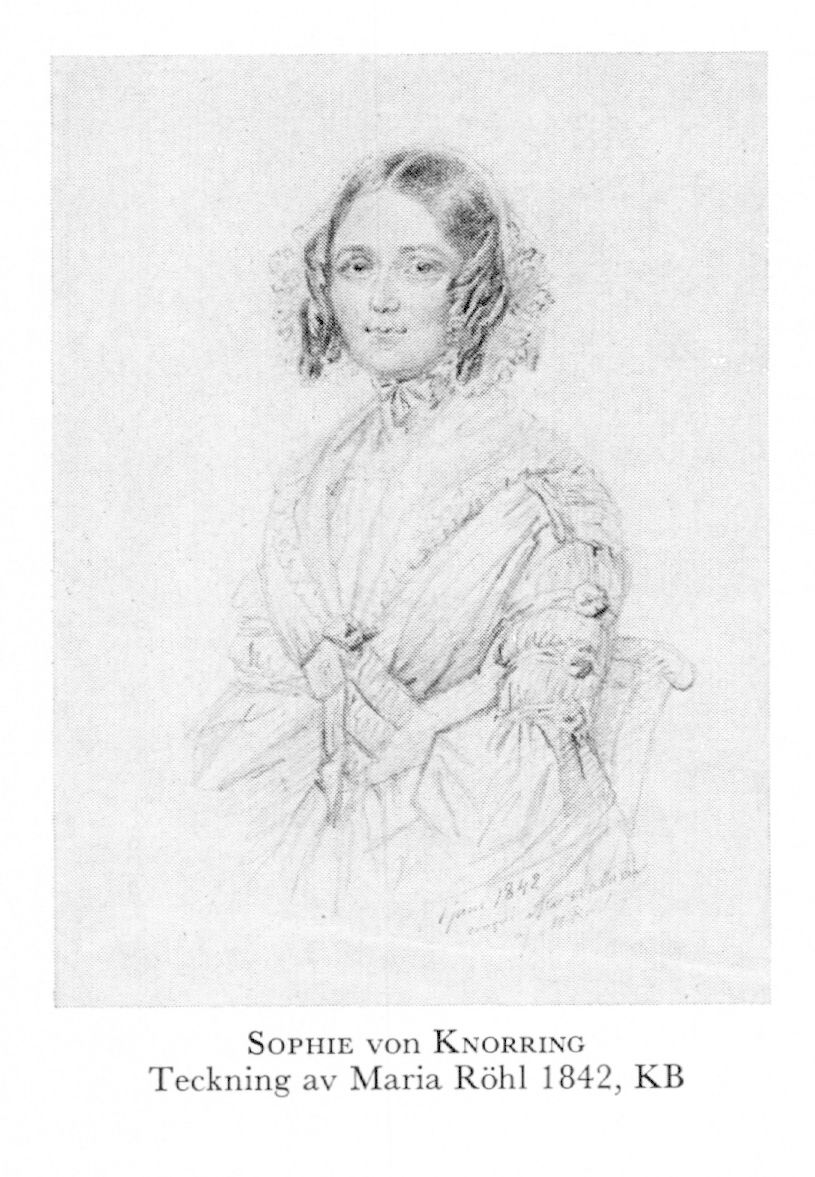