Sophie Ribbing was a Swedish artist who was particularly known for her portraits.

Sophie Ribbing was born at the Södraholm estate, in Adelöv parish of Jönköping county, in 1835. She was the fourth of seven children. The Ribbing family was old nobility and her paternal grandfather was the holder of the Ribbing family’s heritable property Ulvsnäs, ten kilometres east of Jönköping. Sophie Ribbing’s father, Arvid Ribbing, served as the hundred governor of Tveta, Vista and Mo hundreds. Her mother, Augusta Ehrencrona, also came from a noble family and her maternal grandfather was the hundred governor in Värmland. In 1839 the family moved to Bråneryd estate in Hakarp parish, and it was there that Sophie Ribbing grew up and spent large parts of her life.

Sophie Ribbing began her art studies in Stockholm but soon continued them abroad. During the 1850s she studied landscape painting with Karl Ferdinand Sohn, a teacher at the Düsseldorf academy. At the time Düsseldorf had become a centre of arts which was highly attractive to Scandinavian artists. While Sophie Ribbing was in Düsseldorf Agnes Börjesson and Wilhelmina Lagerholm also came to the town. Sophie Ribbing later studied painting in Paris under Ange Tissier, and subsequently in Brussels under the historical painter Louis Gallait. She later also spent lengthy periods in Rome – together with Agnes Börjesson – as well as in London, and Oslo, where she also died.

Sophie Ribbing made a name for herself as both a genre painter and a portrait painter. She was heavily influenced by Louis Gallait in her genre painting. Her most known works are Ritande gossar ,1864, and Den övergivna, 1869. She gained a lot of attention for the former at the Scandinavian exhibition in Stockholm in 1866. Her painting was bought for a record sum by Gothenburg Konstförening. Sophie Ribbing was, however, mainly known for her portraits. Within this category her most well-known pieces include her portrait of the author Helena Nyblom, which is at Sweden's Nationalmuseum, as well as her portrait of the composer Ravnkilde, which is at Fredriksborg museum. The Uffizi gallery in Florence holds one of her self-portraits, completed while she was in Italy.

During her time in London Sophie Ribbing exhibited several paintings at the Royal Academy. She also frequently displayed her work through the Stockholm exhibitions held by the Swedish Academy of Art, as well as in exhibitions in Copenhagen in 1872 and 1888. Along with works by the likes of August Strindberg, Nils Dardel, and Carl Larsson, in 2016 Sophie Ribbing’s painting Ritande gossar was deemed by the Swedish National Heritage Board as representative of Sweden for the Europeana 280 project, which highlighted works significant to European history of art. 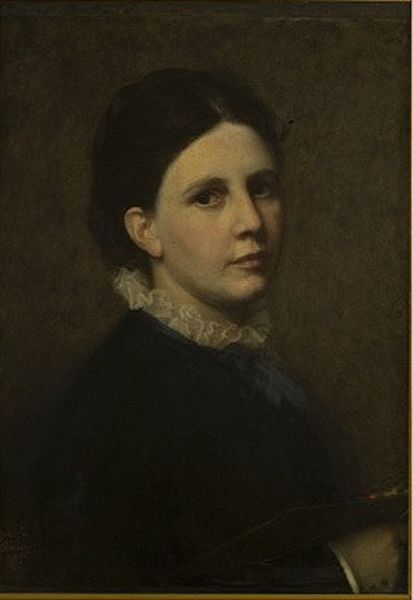