Actor, member of the resistance, spy

Sonja Wigert was a successful film star in Norway and Sweden during the 1940s. During the Second World War she was an active member of the resistance and also served as a spy.

Sonja Wigert was the daughter of Major Sigvald Hansen and his wife Carmen. Sonja Wigert was born in Notodden, Norway in 1913. She had two younger brothers, Knut and Erik. She grew up in Skien, where she took ballet lessons at the town’s school of dance and made her stage debut aged 10. Sonja Wigert dreamt of becoming either a ballet-dancer or a fashion-designer. Following studies at the Statens håndverks- og kunstindustriskole in Oslo she spent some time working at Sidenhuset in the city. She then travelled abroad in order to study French in Paris and in Switzerland. Upon her return home she had intended to begin studying business and eventually become an office worker. However, someone signed her up for the “Finn Norges Garbo!” competition when it was advertised. She ended up coming joint first and was given a minor film role in the 1934 film Sangen om Rondane. That same year she then enrolled as a student and a prompter at Det Norske Teatret. She adopted the surname of Wigert, her mother’s maiden name, the year after making her acting debut. From 1935–1938 she was employed at Det Nye Teater and from 1938–1939 at the National theatre.

Sonja Wigert rapidly found success in plays such as Bröderna Östermans huskors, Fröken Kyrkråtta, and Vår i luften. She also appeared in revue shows at Scala and Chat Noir. In 1937 she launched the hit song “Finnes det en liten gutt” on the radio. That same year she made her silver screen debut in Norway in Tancred Ibsen’s film Tattarbruden. Her appearance in Kaj Munk’s Diktatorinnen at the National theatre in 1939 proved to be her public breakthrough as a stage character actor.

In 1938 Sonja Wigert played the title role in Leif Sinding and Arne Bornebusch’s lavish rural play Eli Sjursdotter, which is set in 1719 during the Great Northern War. Schamyl Bauman then attracted her across to Sweden by giving her a role in the film I dag börjar livet in which she performed opposite Sture Lagerwall. She moved to Stockholm in 1939. That year she appeared in the comedy Hennes lilla majestät, based on a play by Karl Gerhard, playing a spoiled Norwegian shipowner’s daughter who is forced to adopt new perspectives with Bengt, an unconventional and modern priest.

Sonja Wigert’s big Swedish cinematic breakthrough came through Anders Henrikson’s 1942 drama Fallet Ingegerd Bremssen, based on Dagmar Edqvist’s remarkable 1937 novel which in turn was based on a real-life case. Ingegerd Bremssen, a district nurse, is attacked and raped one night on her way home from work. She suffers severe shock and walks away from her life. The film’s director plays the part of the doctor who decides to treat the traumatised Ingegerd to help her begin the lengthy journey towards recovery from her ordeal. The film received all-round acclaim for its ambitious subject matter as well as for the clarity and care that was applied to it.

In the 1943 Hasse Ekman film Ombyte av tåg Sonja Wigert played the part of Inga Dahl, an actor who bumps into her childhood love Joakim at a train station. The film depicts their love story from beginning to end. It is a tender and wistful account of two people who cannot be together despite their love for each other. It was one of Sonja Wigert’s favourite roles. She also appeared in the sentimental love story from 1944 called Räkna de lyckliga stunderna blott, directed by Rune Carlsten, about a young lawyer who falls in love with a beautiful seamstress named Annemarie, played by Sonja Wigert, in the last decade of the 1800s and their impossible love for each other. Sonja Wigert was awarded a Charlie for her performance.

Sonja Wigert also appeared in films such as Ungt blod, from 1937, the 1940 Hennes melodi, Jag älskar dig, argbigga, from 1946, En fluga gör ingen sommar, from 1947, the 1948 Den hemlighetsfulla våningen, Vi flyger på Rio, from 1949, Kvinnan bakom allt, from 1951, and the 1953 I dimma dold. She also appeared in the 1954 American TV-series Foreign Intrigue in which she acted opposite Gerald Mohr, amongst others. She performed in a total of 22 films in Sweden, including two co-productions with Norway, as well as a handful of Norwegian films and two Danish films. Initially most of her roles were those of vibrant young women but as time passed she also began to portray women whose nerves and souls were wrecked, as well as some sensual and sophisticated seductresses. The enigmatic Sonja Wigert was reminiscent of a Nordic Vivien Leigh through the aura of vanity and sophistication she exuded, a rarity amongst actors at that time.

Sonja Wigert developed a second use for her acting talent. Her real life was even more dramatic than the ones she portrayed on the silver screen and during the Second World War she came to lead a double life. Sonja Wigert collaborated with the Norwegian resistance movement from 1941 onwards and in 1942 she also became a spy for the Swedes. The Swedish military gave her a mission to travel to Norway in order to find information on German officers there – including Josef Terboven, the Reichskommissar of occupied Norway. Her codename was “Bill”. She then offered to spy on Sweden for Terboven, at his expense, all the while remaining a Swedish double-agent. Terboven, who had a weakness for beautiful actresses and actively courted her, fell for the trap. This enabled the Swedes to gain information which revealed the identity of the Gestapo’s top man in Sweden, as well as the identity of a couple of German agents. Sonja Wigert’s prime goal was to save her father who was being held prisoner at Grini, a Nazi internment camp for political prisoners, that was outside of Oslo. She had already been anti-Nazi for quite some time at this point.

Sonja Wigert placed herself in great danger and risked subjecting both herself and her family to Nazi revenge if she was discovered. In the end she was successful and not only her father but other prisoners were also released. Further, she was able to evacuate her family from Norway. Sonja Wigert then began to work for the Americans and for the Office of Strategic Services (OSS), the precursor to the CIA. During the Second World War Stockholm’s Grand Hotel and the city itself served as important focal points for spies and Sonja Wigert was a key figure who played her part well and helped to get a host of Nazis expelled from the country. Later she said that: “All of it was horrible. It was torment to go on the stage and to make films whilst this farce was ongoing. However, the worst thing was the icy coldness I felt from my friends”. By the autumn of 1943 the Germans had realised that Sonja Wigert was no ally of theirs and she was thus no longer able to carry out her mission. In revenge they began to spread lies about her which resulted in her being frozen out of both Sweden and Norway. After the war ended some people who knew what she had done attempted to clear her name in Norway, but they met with little success. People stopped phoning, they no longer came to see her, and she stopped being invited round to people’s homes. Rumour had it that she had been a German spy. One of the few people to remain steadfastly by her side was her colleague and close friend Sture Lagerwall. Sonja Wigert sought to clear her name in 1945 already by discussing her anti-German activities in an interview. Her honour was partly re-instated in 1946 but the whole truth about her contribution was only fully revealed over 25 years after she had died when the Swedish secret service archive released the information.

The 1944 resistance-themed film called Mitt folk är icke ditt, directed by Weyler Hildebrand, is very reminiscent of Sonja Wigert’s wartime experiences. She plays the part of Else Hill, a pianist who returns home following success abroad. Her country is being occupied by a foreign power and its top commander is Major Rolf von Ritter, with whom Else had been romantically involved before the war. Else’s father is revealed as the probable leader of the resistance movement. She then goes to von Ritter in an attempt to liberate her father and plays along when von Ritter attempts to seduce her, in the hopes that he will help her. Sonja Wigert put in a strong performance as Else, with an intensity in her voice conveying both authenticity and bravery. Her real life experiences had been similar and she had been made to pay a high price for the most demanding role of her life, as did many other female spies of the era.

Whilst she was one of the leading stars of Swedish cinema Sonja Wigert also continued her theatrical performances in Sweden, Norway, Denmark and in Finland. Some of the productions she performed in include Kokottskolan at the Folk theatre in Stockholm in 1941, Misantropen in 1944 and Kameliadamen in 1945 at Nya teatern, also in Stockholm, an acclaimed portrayal of Blanche DuBois in Linje Lusta at the Trøndelag theatre in Trondheim in 1946, Min fru går igen at Det Ny Teater in Copenhagen in 1946, and as Maxime Faulk in Tennessee Williams’ Iguanans natt at the Vasa theatre in 1962. She also toured with various productions including Hasse Ekman’s comedy Gungstolen in 1964 and the Riksteatern production of Noël Coward’s Jag älskar dig, markatta which toured Sweden in 1967. She also appeared on the stage at the Oscar theatre, the Skansen theatre, and the Allé theatre.

Sonja Wigert was twice married. Her first marriage dated from 1939 and was to a Swedish journalist called Torsten Flodén. During the Second World War Sonja Wigert met the Danish pilot Niels von Holstein-Rathlou. They married in 1945. In the autumn of 1949, whilst her husband was flying a Spitfire across the Sound, the plane crashed and he was killed.

During the 1950s Sonja Wigert and one of her actor friends ran a petrol-station in Stockholm. She performed in her final film in 1960 and then began to increasingly withdraw from acting. In 1969 she moved to Spain.

Sonja Wigert appeared in about 30 films and numerous plays throughout Scandinavia during her acting career which spanned 30 years. She was a spiritual comedienne as well as a dramatic actress who also served as an important resistance fighter. She never fully got amends for nor did she get the deserved recognition for her significant contributions during the Second World War.

Sonja Wigert died in 1980. She is buried in Alfaz del Pi in Spain. 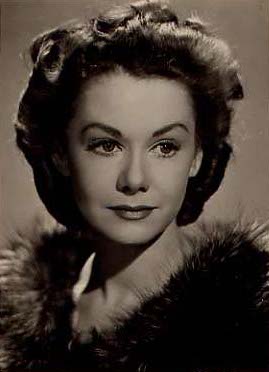