Sonja Kovalevsky was a mathematician and an author who also became the first female professor in Sweden.

Sonja Kovalevsky was born in Moscow in 1850. She was the daughter of Vasilij Korvin-Krukovsky and Elizaveta Feodorovna Schubert. Sonja Kovalevsky’s childhood was spent alternately in the Russian capital of St Petersburg and at the family property of Palibino, which lay not far from the Lithuanian border. According to her own accounts her childhood was influenced by the feeling that she was not really loved by her parents. Sonja Kovalevsky was the second child – out of three – born to her parents and her parents longed for a son. Her six-year elder sister, Anyuta, who later became an author, feminist, and revolutionary socialist, was courted by the famous writer Fyodor Dostoevsky for a time but opted instead to marry the leading French socialist Victor Jaclard. Sonja Kovalevsky’s brother – and her parent’s longed for soon – Fedor was born in 1855.

Sonja Kovalevsky was privately home-educated from the age of seven and studied several languages from a young age. In her youth she dreamt of becoming a writer like her sister and some of her early attempts were favourably reviewed by Dostoevsky himself. However, she had fallen for mathematics at an early age and her great talent for the science soon became apparent. The family social circle included the Russian physicist Nikolai Tyrtov, who was impressed by her ability to – entirely unaided – use his textbook to understand the properties of physics. Tyrtov encouraged Sonja Kovalevsky’s parents to allow their daughter to study mathematics. Thus, from 1866–1868 Sonja Kovalevsky received her first mathematical training through private lessons with Alexander Strannoljubskij, a professor of mathematics at the Russian naval academy in St Petersburg.

By the time she was 18 years old Sonja Kovalevsky had developed significant mathematical abilities and wanted to study abroad. Within Russia there were only very limited possibilities for women to access further education. Women were not at all welcome at St Petersburg university and very few Russian parents allowed their daughters to travel abroad to undertake university studies. Both Sonja Kovalevsky and her sister belonged to the intellectual Russian milieu within which there was a desire to improve women’s social positions and to support their desire for emancipation. In order to continue her studies Sonja Kovalevsky thus entered into a marriage of convenience with the academically promising 25-year old Russian palaeontologist Vladimir Kovalevsky. They married in 1868 and, with her husband’s permission, Sonja Kovalevsky could continue her studies.

She began these studies in Vienna in 1868, but she and her husband moved on to Heidelberg the following year already. There she studied physics and chemistry, and elliptical functions with Leo Königsberger. Sonja Kovalevsky personally contributed to the fight for women to gain access to higher education while she was in Heidelberg. It was through her that Julia Lermontova, a gifted friend of hers from St Petersburg, was admitted to study chemistry a Heidelberg. This resulted in Julia becoming the first Russian woman to gain a doctorate in chemistry.

Through her connection with Königsberger Sonja Kovalevsky came to study in Berlin with the eminent German mathematician Karl Weierstrass. She was not allowed to attend normal courses at the university because she was a woman but instead she was given private tutoring from 1871–1874. They became close friends and he admired her “diligence, ability, and dedication” with regard to her mathematical studies. Sonja Kovalevsky prepared three dissertations during her time with Weierstrass, one on partial differential equations, one on Abelian integrals, and one on the planet Saturn’s rings, and all of these were published. Based on these publications Karl Weierstrass applied for a doctorate in mathematics for Sonja Kovalevsky at Göttingen university. In her absence, and without an oral viva she was awarded her doctorate.

Despite having a doctorate Sonja Kovalevsky was unable to get a job at a German university, even though she had letters of recommendation from Weierstrass. Thus she and her husband – who had gained his own doctorate at Jena in 1872 – returned to Russia and St Petersburg. It turned out to be very difficult for both of them to get permanent posts at the university in St Petersburg. Their foreign degrees were not accepted. For five years the couple had to live off of property transactions. Sonja Kovalevsky contributed to their income by doing various bits of writing, including writing theatre reviews. They led a financially precarious lifestyle. Their daughter Sofija was born in October 1878 but the Kovalevsky’s economic difficulties meant they had to move into a smaller apartment in Moscow.

Once they had settled in Moscow their lives took a slight turn for the better. Vladimar Kovalevsky got a position as docent in the geology department at Moscow university. Sonja Kovalevsky once again devoted herself to mathematics. In 1880 she gave a lecture on Abelian functions at a conference in St Petersburg and this led to her being elected as a member of the Moscow mathematical society. However, the university remained inaccessible to women.

Following the murder of Tsar Alexander in 1881 Sonja Kovalevsky and her daughter left the unstable situation which prevailed in Russia and headed to Professor Weierstrass in Germany for the summer. They then travelled on to her sister Anyuta who lived in Paris. Sonja Kovalevsky’s daughter fell seriously ill in Paris and so was sent to her husband’s brother in Russia, where she remained for several years. During Sonja Kovalevsky’s period abroad with her daughter her husband had remained in Russia, where along with his university work he was also working as a consultant for an oil company. In 1883 Sonja Kovalevsky was informed that her husband had committed suicide. He had innocently been drawn into the oil company’s illegal business and when he was faced with going to court to defend himself he opted to commit suicide. Sonja Kovalevsky took the news of his suicide very badly. She retrieved her daughter from her brother-in-law in Odessa and travelled to Moscow where she was able to clear her late husband’s name with the help of some of his former university colleagues.

In the autumn of 1883 Sonja Kovalevsky experienced a turning point in her life which eventually resulted in her coming to Sweden. She received an invitation to teach on Abelian functions at Stockholms högskola (college). This invitation came from the Swedish professor of mathematics Gösta Mittag-Leffler whom she had met in St Petersburg in 1880. Mittag-Leffler was a good friend and a champion of female emancipation, both of which aspects he put into practise in this context. Sonja Kovalevsky began to lecture on the theory of partial differential equations at Stockholm college in 1883. She was able to take up a five-year limited post as professor in higher mathematical analysis at the college through Mittag-Leffler’s intervention. This meant that she became the first female professor in Sweden, the second female professor of mathematics in the world, and the first woman in Sweden to hold a high academic post. In 1889 her post was transformed into a lifelong professorship. This led to vociferous discussions at Stockholm college brought on not by Sonja Kovalevsky’s gender but rather her political connections. Through her sister she knew members of the Russian nihilist movement and socialists. Stockholm college was in private ownership when Sonja Kovalevsky became a professor. Women were still excluded from academic posts at the state-run equivalent institutions.

Sonja Kovalevsky was very successful in her post as professor in Stockholm. As a mathematician she, like Gösta Mittag-Leffler, belonged to the Weierstrass school. She is considered to be the most prominent female mathematician of the 1800s and her work engendered international acclaim. Her pre-eminent scientific work was the dissertation entitled Om en fast kropps rotation kring en fast punkt. She was awarded the French academy of science’s Prix Bordin for it in 1888, and the academy viewed her contribution as so significant that the prize amount was raised from 3 000 Francs to 5 000 Francs. In 1889 she was awarded the Royal Swedish Academy of Science prize for further essays in the same subject.

During her final years Sonja Kovalevsky finally realised her early dreams of becoming a writer. In collaboration with Mittag-Leffler’s sister and her friend Anne Charlotte Leffler she wrote plays and short stories, including Kampen för lyckan: två paralleldramer, from 1887. Her autobiographical novel Ur ryska lifvet: sysrarna Rajevski was published in 1889. This told of her and her sister’s childhoods. Sonja Kovalevsky also reviewed Swedish literature in the Russian journal Severnyj vestnik. She also wrote about August Strindberg. The latter strongly disliked Sonja Kovalevsky and would later belittle her abilities in Svarta Fanor in 1907: “Kowalewski knew a litte mathematics which Weierstrass had taught her”. However, Sonja Kovalevsky never lived to read those lines herself.

During a trip overseas in the winter of 1890–1891 Sonja Kovalevsky became infected with influenza which brought on a serious lung infection. Despite this she gave the first lecture of term on 6 February 1891. This proved to be her last, and four days later she died. She is buried at the Norra cemetery in Solna.

Following Sonja Kovalevsky’s death Anne Charlotte Leffler wrote a biography of her friend entitled Sonja Kovalevsky: Hvad jag har upplefvat tillsammans med henne och hvad hon berättat mig om sig själf which was published in 1892. This biography was translated into German, English, French, Russian, Dutch, and Danish. Russian women organised a collection for a stone cross which was placed at Sonja Kovalevsky’s grave at the Norra cemetery. In 1948 the Russian academy of sciences published all her scientific work in a series called Vetenskapens klassiker. Sonja Kovalevsky’s name is still (2018) known within Swedish schools through the Sonja Kovalevsky days which are intended to encourage interest in mathematical studies among young people of high school age. 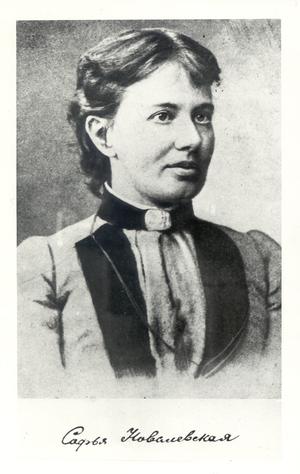