Sofia Svensson was born in Tvååker, Halland in 1873. She was the daughter of Sven Andersson, a freeholder, and Lena Johanna Bengtsdotter. They had a large family. Her father married twice and fathered eleven children. Sofia Svensson was born in his second marriage. In 1893 Sofia Svensson gained her qualifications as a junior-school teacher in Halmstad. She subsequently, in 1903, gained her qualifications as a public-school teacher in Skara. She became qualified to hold a fulltime post at an advanced public school in 1916. Sofia Svensson had worked, from 1894–1899, as an associate teacher in Rolfstorp, and then from 1905–1907 she held a fulltime teaching post in Karlstad, and finally held the same post in Gothenburg from 1907–1923.

Sofia Svensson was initially employed as a teacher in Gothenburg at the Nordhem school and then at Gothenburg’s advanced public school. Her social activism found expression within her teaching role through her efforts to provide children’s meals and children’s clothing. She was also a leading figure within the local school authority’s children’s clothing society. Her proposal that the subject of sexual hygiene be introduced at school and that teachers should be trained to teach the subject caused some controversy.

Sofia Svensson was active within Sveriges Folkskollärarinneförbund (SF) (Swedish public-school teachers’ association), a trade union which was set up to promote equal working conditions such as equal pay for male and female teachers. She was secretary of the Gothenburg folkskollärarinneförening (female public-school teachers’ association), initially elected as a deputy and then as a full member of its central board in 1922. Her practical contributions involved proofreading and distributing the Lärarinneförbundet magazine which was printed in Gothenburg. Ahead of the 1922 election for the central board when Sofia Svensson became a full-time member a certain amount of discussion had arisen regarding her candidacy given her adherence to communism.

Sofia Svensson was a leading figure within the workers’ movement in Gothenburg. Initially she was a member of the Social Democratic party but from 1916 onwards she represented the left-wing opposition. She was the only woman elected onto the board of the new arbetarekommun (workers’ branch of the Social Democratic party) which was established in Gothenburg in 1917. In 1922 Sofia Svensson was the first name on the Swedish communist party’s list of candidates for the second circle, resulting in her election onto Gothenburg council. This was the first time a woman had been placed in the top position of a Gothenburg electoral candidates’ list. Shortly thereafter her fellow party colleagues, Martin Andersson and Viktor Svensson, were also elected. Sofia Svensson and her two fellow communists joined the council in 1923 and her first input concerned school matters. She also had duties during Social Democratic party meetings, such as the women’s meetings. Her views in support of anti-militarism, equality, and a ban on intoxicating drinks chimed with the views of the left-wing branch of the party.

Sofia Svensson lived in a relatively large apartment at Övre Husargatan 21 in Gothenburg. She was unmarried and used her apartment for social-welfare endeavours. Her council duties involved serving as ‘kretsombud’ (a type of probation officer) on behalf of the child-welfare agency, and she was subsequently appointed child-welfare officer. She was also engaged in ensuring that a child’s parentage was recorded and that their benefits were assured. At the peak of her role as child-welfare officer she was responsible for about 250 children. She also personally cared for children who were struggling: according to the census records there were four children living with her in 1922. Sofia Svensson was also on the board for Lingatan at Gullmarsfjorden, which was a reform school for girls.

The daily press joked about Sofia Svensson’s registration as a public-school teacher being recorded using the masculine form of the term (lärare instead of lärarinna). According to one journalist Sofia Svensson thus subsequently referred to herself at one meeting as ‘Mr Sofia Svensson’. The journalist went on to claim that Sofia Svensson explained her use of the masculine title thus: “I am just as much a man as any paltry good-for-nothing, since ‘Mr’ is not an actual title but rather an expression that one is free, that one is in charge, and I am in charge of my home and my class just as much as any of my colleagues”. Nevertheless, when Sofia Svensson referred to herself in minutes she used the term ‘miss Sofia Svensson’. She was later again referred to as ‘Mr’, for example at an anniversary celebration and opening to a congress of Vänsterpartiet kommunisterna (the left-wing party communists). On this occasion there was a performance by a female choir who sang about Sofia Svensson and called themselves Herr Sofia.

Sofia Svensson died a few months before turning 50. She fell ill in 1923, and died in Gothenburg that same year. She is buried at Tvååker. 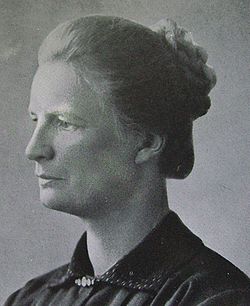