Sofia Gumaelius founded the first modern advertising agency in Sweden and was a very successful businesswoman.

Sofia Gumaelius was born in 1840 into a large family of six sisters and three brothers. They were one of Örebro’s most influential families. Her father, Otto Joel Gumaelius, was a local politician and owned Nerikes Allehanda, the town’s leading newspaper. He was also the feared and respected rector of Karolinska Läroverket in Örebro. Her mother, Eva Wester, came from Haddebo Bruk in Närke.

Sofia Gumaelius’ three brothers all completed school and went on to further education at university. The sisters were, however, homeschooled by a governess. Sofia Gumaelius also spent a short period of time at the Lancaster girls’ school in Örebro.

When Sofia Gumaelius opened her advertising agency in 1877 she had no prior experience of running her own business. Everything she knew about advertising she had learned during the couple of weeks she had spent with her brother Arvid Gumaelius, a member of parliament and editor-in-chief and owner of Nerikes Allehanda. He had taken over the newspaper from his father. Arvid Gumaelius had understood the importance of advertising to a newspaper’s finances as the growing industrialization proved a boon to the economy. Sofia’s short apprenticeship at Nerikes Allehanda had left her with the same vision. An advertising agency would be useful not only to the public but also to the newspaper owners. Further, the owner of a well-kept advertising agency should be able to make a sizable profit.

In the summer of 1877 Sofia Gumaelius moved from Örebro to Stockholm. Her parents had died and she was forced to seek her own means to provide a living. She rented two small rooms at Myntgata 1 in Gamla stan. Two ladies from Örebro, who were already known to Sofia Gumaelius, owned the building. One of the rooms, with a view over the royal palace and the Grand Hotel, became her advertising agency. The other room became her home. Her initial capital totalled 19 kroner and 9 öre. She had borrowed a further 35 kroner and 65 öre from her brother. This was enough for an account book, paper and envelopes, stamps and ink, print block letters and numbers, and moreover stamps and a pigeonhole to see her through the next six months. With that, Nya Annonsbyrån (“the New Advertising Agency”) was operational. Sofia Gumaelius’ first colleague was Anna Björnlund, with whom she came to share her life and her career until her death in 1915.

A single text and a single point of payment. That was Sofia Gumaelius’ simple and clever business idea. The advertiser was to be free of all hassle, while her Nya Annonsbyrå would take care of the work. She promised her clients a set price list, integrity, order and speedy delivery. Newspaper owners who included the adverts were promised financial gains which would make them independent and powerful members of the national press. Her business idea would last for more than a century.

Sofia Gumaelius’ Nya Annonsbyrå opened at just the right time. The previous Stockholm-based advertising agency had just gone bankrupt. The larger Stockholm newspapers had their own advertising agencies: that of Dagens Nyheter was located in the same building as Sofia Gumaelius, Aftonbladet’s agencies were at Mynttorg and Drottninggata. Allehanda had their agency at Munkbro. Sofia Gumaelius could see there were often long queues. Clients were made to wait for long periods with their advertising texts without getting the service that she was offering.

Her first major advertising order came from Hellefors factory. It described how the company produced their metal ware and machines: “Swedish iron of the highest order is prepared quickly and affordably. Milling and foundry work, saws, blowers, turbines and pumps.” The advertisement cost 117 kroner and 70 öre and was displayed on the front page of Dagens Nyheter and a number of regional papers. This was an extraordinary sum of money for Sofia Gumaelius’ small business. A few days later she received somewhat smaller sums – 4 kroner and 36 öre for a job vacancy for a journeyman tailor and 5 kroner and 40 öre for a sale notice for a traction engine. After less than a month Sofia Gumaelius had taken on a total of 60 jobs. At the end of the year her agency had handled more than 3,000 advertisements. The major clients included PA Norstedt & Söners press, Munksjö paper factory, Sätra well, Liljeholmen stearin factory, Herman Meeth’s cloth factory and the Swedish Evangelical Mission. They would remain her clients as long as her business was in operation.

Sofia Gumaelius understood the importance of networks from the outset. As soon as women became eligible for membership in Publicistklubben (the club of the national press), she sought to join it. Once a member she became acquainted with newspaper owners and editors-in-chief, gleaned the desires of the newspaper world and decided to expand her already successful business. In 1883 Gumaelius & Komp Maskinfirma opened at Klara Södra Kyrkogata. There Sofia Gumaelius provided everything newspaper owners and book printers might need – paper, ink, printing presses and composition for printer’s rollers. She began to produce her own printing blocks and soon became a leader in her new enterprise. When Publicistklubben detailed their members’ profits Sofia Gamaelius topped the list. She earned more than either editors-in-chief or newspaper owners and was called “The First Lady of the Press”. She soon decided to live in a style befitting the director’s position she held and moved into a six room apartment at Strandvägen 1.

The same day she turned 50 Sofia Gumaelius established new premises at Drottninggatan 2, in what is known as the Adelswärd building. Now she had a complete site with her advertising agency and machine supplier under the same roof. The newspaper Idun reported that the company was run by “a woman who can handle business like a real man”. Gumaelius Annonsbyrå had subsidiaries in Malmö and Gothenburg and Sofia Gumaelius quickly expanded her enterprise to include Kristiania (now Oslo). In Stockholm she had a new building built at Karduansmakargatan in order to centralize all her activities in the Klara quarter of town, close to the newspaper editors, the central train station and the central post office.

Sofia Gumaelius also established a network in Stockholm’s female cultural elite. She was one of the initiators behind the influential Kvinnoklubben and an early member of the Fredrika Bremer Association. When the first national association for women’s suffrage was established Sofia Gumaelius was its treasurer. Further, she took good care of her employees and ensured that their pension insurance was paid. Many of her employees saw out their working days with her.

Sofia Gumaelius fell ill with influenza in 1914, just as she was expanding her business to include yet another overseas branch, this time in Berlin. The day she was buried at Norra Kyrkogården all the Stockholm newspaper offices had their flags at half-mast. Selma Lagerlöf wrote: “As though a giant pine in the forest has been felled, the earth is swaying and shaking below us.”

Sofia Gumaelius’ advertising agency lasted for another 50 years before it went bankrupt in 1978. Its last director, Åke Lindgren, expressed the situation thus: “Gumaelius’ company had brilliant ideas at management level, but lacked those who could take care of everyday matters.” 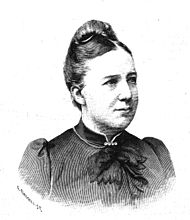