Sofi Nilsson belonged to the first generation of female public-school teachers in Sweden. She was at the forefront of developments in teaching through the introduction of holiday camps, daycare centres, and school kitchens.

Sofi Nilsson was born in 1840. She was the eldest child of Anders Petter Andersson and his wife Anna-Lisa Persdotter, both farmers, who lived on a farm in Tjällmo parish, Östergötland. Her childhood environment was marked by a strong belief in the opportunities afforded by education. Through her father’s studies and implementation of new soil-improvement and sowing-techniques the family farm became a model farm. Sofi Nilsson’s parents also funded and ran a junior school in Tjällmo which provided not just Sofi Nilsson but also other local farmers’ children with a basic education.

Sofi Nilsson already gained the opportunity to provide teaching assistance to the school teacher at the junior school and, once she had completed her own education and been confirmed, she worked as a private tutor and educational assistant in her home area. New opportunities to embark on a serious path to becoming a teacher arose for her when her father was elected into parliament as a representative of the peasants’ estate. In 1859 a royal decree announced that women were to be allowed to enter into the public-school teaching profession, partly as a result of Sofi Nilsson’s father’s lobbying efforts. However, at this time no permanent educational institutions for female public-school teachers existed. Instead, such training was provided through private teaching undertaken by established teachers and school directors. Sofi Nilsson was one of two students who, from 1859–1860, attended one such course run by the educationalist Anders Berg at Finspång model school. She completed the course along with her coeval colleague Augusta Andersson. The two women later went on to work together at Finspång and Stockholm public schools. This shared work experience was framed by a close friendship and was heavily influenced by Anders Berg’s approach to pedagogy. He served as a meaningful role model and mentor within Sofi Nilsson’s professional life.

In the early 1860s the model school set up by Anders Berg in Finspång had generated notable admiration and led to his being recruited to Stockholm in order to organise a similar school in the nation’s capital which in turn was to serve as a model for the national school system. From the autumn term of 1862 Sofi Nilsson and Augusta Andersson were employed as teachers at the model boy’s school set up at Klara school. It was both demanding and rewarding to work as a teacher at the model school. In conjunction with their teaching duties Sofi Nilsson, Augusta Andersson, and other members of the teaching body, all devoted themselves to in-service training and discussions of approaches to pedagogy in a variety of fora. Sofi Nilsson also gained further training within her work. Anders Berg was succeeded by C J Meijerberg, a zealous public-school inspector, who continuously trained his body of teachers.

As far as Sofi Nilsson was concerned the model school in Klara parish served as a foothold into Stockholm’s educational and philanthropic circles which were roiling with activity during the late 1800s. Through these circles Sofi Nilsson formed a significant acquaintanceship with Anna Hierta-Retzius. The model school served as a space for innovation within which attention to school developments overseas was notable. Sofi Nilsson, along with Anna Hierta-Retzius, lay behind several innovative pedagogic proposals related to public schools, including establishing holiday camps and daycare centres. Planning these enterprises often involved study trips abroad. Sofi Nilsson’s first overseas trip was to Great Britain where she studied how Pestalozzi’s pedagogic approach was adapted to public schools in England and Scotland, and she also acquired materials for use in Swedish public-school teaching. Sofi Nilsson undertook many European educational trips throughout the course of her life; these were sometimes externally funded and sometimes at her own expense.

Sofi Nilsson also met her future husband through the model school. This was Sven Nilsson, a public-school teacher. They married two years after they met in 1873 and their daughter Gerda Svensson, who later became the first married woman in Sweden to gain her PhD, was born in 1876. Sofi Nilsson, following her experiences as a mother, became interested in nutritional studies, an area of knowledge which was starting to gain a foothold within European school curricula during the 1870s. Sofi Nilsson made use of the growing wealth of household literature in an attempt at deepening her own knowledge. This, in turn, was to be used with schoolchildren rather than housemaids and housewives – the latter of which tended to be the target audience of these publications. In 1893 the textbook Hushållslärans första grunder för skola och hem was published. In this book Sofi Nilsson provided the working class with both nutritional findings and solid cooking advice and moral encouragement regarding frugality and diligence. This textbook was followed by a supplementary volume in 1896, and a third book by Sofi Nilsson, entitled Om matlagning i enklare hem, published in 1899. Alongside these publications Sofi Nilsson also undertook overseas travel to investigate school cookery teaching in Great Britain and Belgium, whilst also engaging in school kitchen visits at Stockholm’s public schools.

Sofi Nilsson’s pioneering work on holiday camps, daycare centres, and school kitchens for public-school children engendered a lot of attention and established her as a recognised and multifaceted pedagogue. The work she did at the model school and through her overseas trips gave her ample opportunities to be involved in the latest developments within the nineteenth century school system whilst also being able to put these ideas into practise. Sofi Nilsson retired, aged 56, following 34 years as a professional teacher at the Klara model school. She still carried on working for the school in other spheres. The year after she retired, in 1897, the Allmänna konst- och industriutställningen was held in Stockholm at which the most prominent innovations within Swedish public schools were displayed. These included Sofi Nilsson’s school kitchen, as demonstrated by her daughter Gerda, the daycare centre enterprise which Sofi Nilsson had developed together with Anna Hierta-Retzius, as well as the ventilation system for school premises which her husband Sven Nilsson had created. Around the turn of the century the Nilsson couple even appeared on the international scene. They represented Sweden and Swedish public schools at the Paris World’s Fair in 1900 and at the St. Louis World’s Fair in 1904.

Sofi Nilsson survived both her husband Sven and her daughter Gerda, the latter of which died in 1915 as a result of complications following an accident. She left behind a pedagogic heritage in the form of her textbooks and the elements she had introduced into public schools. 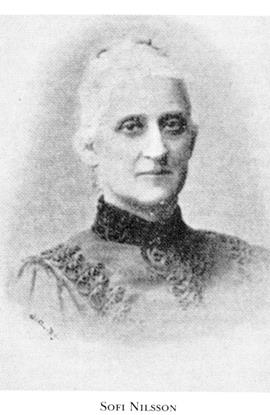