Sigrid Storråda, or Sigríð Storråda, is thought to have been the earliest known queen of Sweden

Whether Sigrid Storråda ever was a genuine historical figure has been debated, often questioned and even dismissed within modern Swedish historical research — including by Lauritz Weibull — since the late nineteenth century until the current day. This uncertainty surrounding her existence arises from the medieval mythology that built up around her persona and continued in subsequent literature. The myths developed through the frequently erroneous, and often intentional, conflation of Sigrid Storråda with other individuals, or as a result of one and the same individual being presented as different people, namely Gunhild (Gunhilda) and Świętosława, a Polish princess. This conflation has given rise to the belief that Sigrid Storråda was the first dynastic link between the Polish, Danish, and Swedish royal houses.

Almost all the information on Sigrid Storråda is based on reconstructions from unreliable source material which dates from circa 150—200 years after her presumed date of death. These are primarily the Norwegian-Icelandic sagas, including Heimskringla by Snorri Sturluson and Saxo Grammaticus’ Gesta Danorum, in which she is named as Syritha. According to the sagas Sigrid Storråda was the daughter of the Swedish magnate Skoglar-Toste (whose name is sometimes written Skǫglar-Tósti or Scolgar-Tosta), whom scholars have attempted to connect with a runestone in Uppland (U 344), the so-called Orkesta stone. According to the sagas and the Danish chronicler Saxo Grammaticus, following the death of Erik Segersäll circa 995, Sigrid Storråda rejected Olav Trygvasson’s marriage proposal and thus indirectly contributed to the Svolder sea battle of circa 999/1000, fought between Olav Trygvasson, Olof Skötkonung, and Sven Tveskägg.

With great reservations as to historical accuracy it can be said that Sigrid Storråda was probably born into a Swedish magnate’s family and did perhaps marry Erik Segersäll. She may thus have been the mother of the first Christian king of Sweden, Olof Skötkonung. Following the death of Erik Segersäll she may then have married the Danish king, Sven Tveskägg, and given birth to Estrid/Astrid, who was eventually the maternal grandmother of Sven Estridsen, king of Denmark from 1047. If these relationships are correct they would make Sigrid Storråda the first queen in Sweden and Denmark who has become known to posterity.

The confusion around the person of Sigrid Storråda lies in the fact that she has probably been confused with another contemporary, Gunhild, herself sometimes, presumably erroneously, presented as Świętosława. Information on Gunhild and her name meanwhile stems from late sagas which are in themselves of dubious veracity. According to these sagas Gunhild had been Sven Tveskägg’s wife until 995, shortly before he subsequently married Sigrid Storråda, and Gunhild thus was the mother of Canute the Great, amongst other children. Research indicates that Gunhild was the daughter of Mieszko I of the house of Piast, the first Christian prince of Poland, in his second marriage to the German Oda of Haldensleben. If this is correct then Gunhild was married off to Sven Tveskägg by her half-brother, Bolesław I Chrobry, who in 1025 was crowned the first king of Poland. The alliance between the Polish and Danish royal houses can be partly traced through contemporary historiography, primarily through Thietmar of Mersesburg’s Chronicon as well as through Adam of Bremen’s Gesta Hammaburgensis ecclesiae pontificam, itself in part based on information received directly from Sven Estridsen.

The Sigrid Storråda/Gunhild/Świętosława figure has, in modern times, been frequently employed in literature and popular history works both in Sweden and Poland by various writers. These include Selma Lagerlöf in her 1899 work Drottningar i Kungahälla, Carl Grimberg in his 1913 publication Svenska folkets underbara öden I, Frans G Bengtson in his Röde Orm, published 1941—1945, Verner von Heidenstam in Svenskarna och deras hövdingar, published 1908—1910, as well as Jöran Mjöberg in his 2001 book Kvinnoöden i vikingatid. In Poland the same figure has served as the lead character in two commercially successful historical novels: Harda and Królowa, both published in 2016 by Elżbieta Cherzińska. The Swedish historians Birgitta Fritz and Birgit Sawyer have highlighted how all accounts of the Sigrid figure, who in the medieval context is often presented as an example of female deceit, lust for power, and ruthlessness, have likely been inspired by other strong female figures, such as the Russian princess, Olga of Kiev. Modern interpretations of the Sigrid figure, however, present her as a strong and independent female model, unique in her time period. 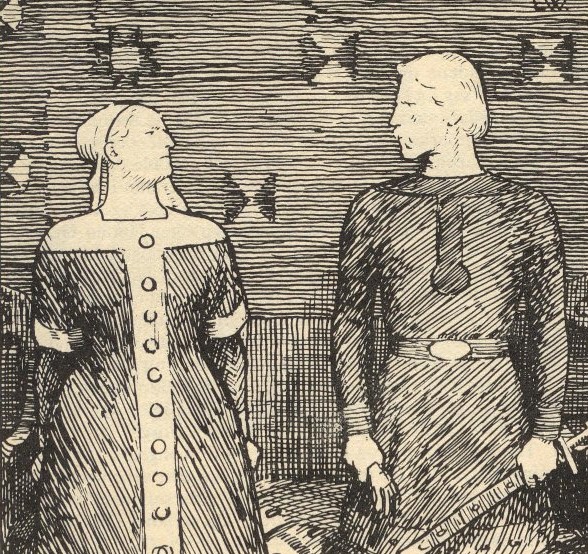 Sigrid Storråda and Olaf Tryggvason as imagined by Erik Werenskiold for the Norwegian translation of Heimskringla, 1899. Image source: Wikimedia Commons