Sigrid (Siri) Holm was a teacher and a leading figure in the temperance and suffrage movements in the northern Swedish province of Norrbotten during the first decades of the 1900s. She was the first woman to be elected to the Luleå municipal council in 1910.

Siri Holm was born and brought up in Luleå, the oldest of the five children of Otto Holm, grammar school teacher, and his wife Emma, née Hammarén. Siri Holm received her earliest education at the town’s girls’ school whose principal Elina Benckert was a relative. The intellectually interested Siri Holm decided early on to become a teacher. At the age of fifteen, she started at the State grammar school in Stockholm. After completing her education there, she returned to Luleå and became a teacher at the girls’ school there in 1891. She remained there until she retired in 1930.

Siri Holm taught several subjects: geometry, physics, chemistry, botany, and hygiene, but mathematics and German were her main subjects. She was described as very knowledgeable and pedagogically skilful, and always meticulous, patient and caring towards her pupils, who in unison have testified to the fact that all they have learnt from her “has remained with them”. The girls’ school was also an important and fertile soil for Siri Holm’s voluntary work, since the staff included many friends and followers. Among these may be mentioned Elina Benckert, Anna Svensson and not least Märta Bucht, the teacher who was to take command of the town’s suffrage association.

In February 1902, in the common room of the girls’ school, the Luleå women’s temperance association was started. Siri Holm was elected chairwoman. Apart from temperance, the association was occupied with a number of social and juridical issues, not least the woman question. “Is it desirable for women to have the same pay as men for the same work?” was one question taken up at a meeting. Siri Holm soon initiated a similar association in Boden, to be followed in time by several more. In 1913, the association in Luleå joined Vita Bandet, and continued under Siri Holm’s leadership until 1953. For many years, she was also the chairwoman of the district organisation and belonged to the central board in 1918–1941.

The Vita Bandet association in Luleå took a number of initiatives socially and for community improvement, for example a gardening and potato-growing initiative during the first world war to counter food shortages, the organisation of courses in for example needlework and shoe-mending for young people, and a summer café at Gültzauudden. The café was kept going for five years from 1916 and offered premises for meetings and lectures apart from alcohol-free eats and drinks. Siri Holm herself held many of the lectures focusing on temperance and issues of morality and animal protection. She was skilful according to witnesses and never needed a manuscript as support.

Starting in 1923, Vita Bandet in Luleå opened a holiday home for tired housewives who needed rest and relief. The first years, they were in Bensbyn, but from 1925 the enterprise was moved to Gammelstad. There the association had a house beautifully situated on Lule river. The home was able to accommodate ten guests from the whole of Norrbotten – mostly single mothers but sometimes mothers with children and even some older, delicate women. They were allowed to stay for about two weeks for a small payment, sometimes even free. The enterprise was financed voluntarily with the capital they had earnt from the café plus income from bazaars, evening entertainments and lectures. The holiday home was discontinued in 1961.

Siri Holm was politically aware at an early age and according to herself the first woman in Luleå to make use of her municipal right to vote. Her father, Otto Holm, was a member of the Luleå municipal council in 1864–1894 of which the last seven years as chairman. Despites the family’s good name, Siri Holm’s participation in a council meeting created such a commotion when she walked in during a meeting to listen that the most conservative gentlemen insisted that she “should have been carried out”.

The suffrage association Föreningen för kvinnans politiska rösträtt (FKPR) in Luleå was founded in 1907 with Siri Holm as a member. She was the first woman to be elected to the Luleå town council in December 1910 – first both in Luleå and in Norrbotten, and the sixth woman elected to a town council in Sweden. Politically she was conservative, but had the support of temperance friends on both sides of the party line. Right and left had abstained in favour of the so-called Women’s List put up by the FKPR, but whatever the case, Siri Holm won most votes in the election.

The opposition’s political organ Norrskensflamman made fun of “auntie Siri” in most of the contributions from that time. In joking terms she is described as an arch-conservative moralistic old woman and a superwoman who took her knitting to municipal council meetings. Even in her own camp, she was controversial, since she unwaveringly voted according to her conscience rather than the party line. Several times in the 1910s, the town council forbade sales of spirits, a result of the industrious efforts for temperance with Siri Holm in the lead.

The alcohol drought was naturally less popular among the town’s restaurateurs. Norrskensflamman reported an attempted coup against Siri Holm in the 1917 election, that failed however. Nonetheless, in 1919 her name had been struck off the list and despite the conservative women’s attempts to present a special temperance list, Siri Holm’s time in municipal politics was over.

Siri Holm’s engagement in peace work grew strongly during the war years. Members from different women’s organisations in Luleå cooperated in a committee that had been started in the name of peace. Both Vita Bandet and FKPR participated, led by Siri Holm and Märta Bucht. These two also took place on the board of the Luleå branch of the Women’s International League for Peace and Freedom. A public meeting was held in Luleå in 1918, followed by several great collections for the needy in Germany, Siberia and Armenia. Siri Holm, a driving force behind all the collections, travelled to Germany and Austria herself in 1921 where she participated among other things in a peace conference.

Siri Holm was also involved in a number of other voluntary efforts. She was a member of about thirty associations, and apart from temperance, peace and the woman question, the issues closest to her heart were animal protection and the Christian mission. She had a warm faith in God and a burning, untiring idealism. Throughout her life, she spent great efforts and strength in helping the suffering all over the world, especially refugees and other victims of war. Towards herself she was incredibly frugal, in order to be able to donate as much as she could to charity.

Her mother Emma Holm was a good example for her daughter Siri, since after her husband’s bankruptcy she looked after the household by herself so as to be able to pay off his debts gradually. First on the list were those who were worst off, and last of all the wealthy hardware store owner. They were all paid.

Siri Holm never married. After her father’s death, she lived with her mother and her sickly sister Elin, until they died in 1927 and 1932 respectively.

Siri Holm was very active and involved long after her retirement. She was much in demand as a lecturer who even when she was over 75 was out on lecture tours. Ten years later she travelled alone to Germany to visit friends and protégés. Right up until the last, rain or shine, the citizens of Luleå saw the vital old lady on her ancient velocipede, purchased in 1899. Siri Holm died in March 1960, just before her ninetieth birthday. Obituaries describe her as “the grand old lady of Luleå town” with whose death a whole era came to an end. She lies buried in the Inner City Cemetery. 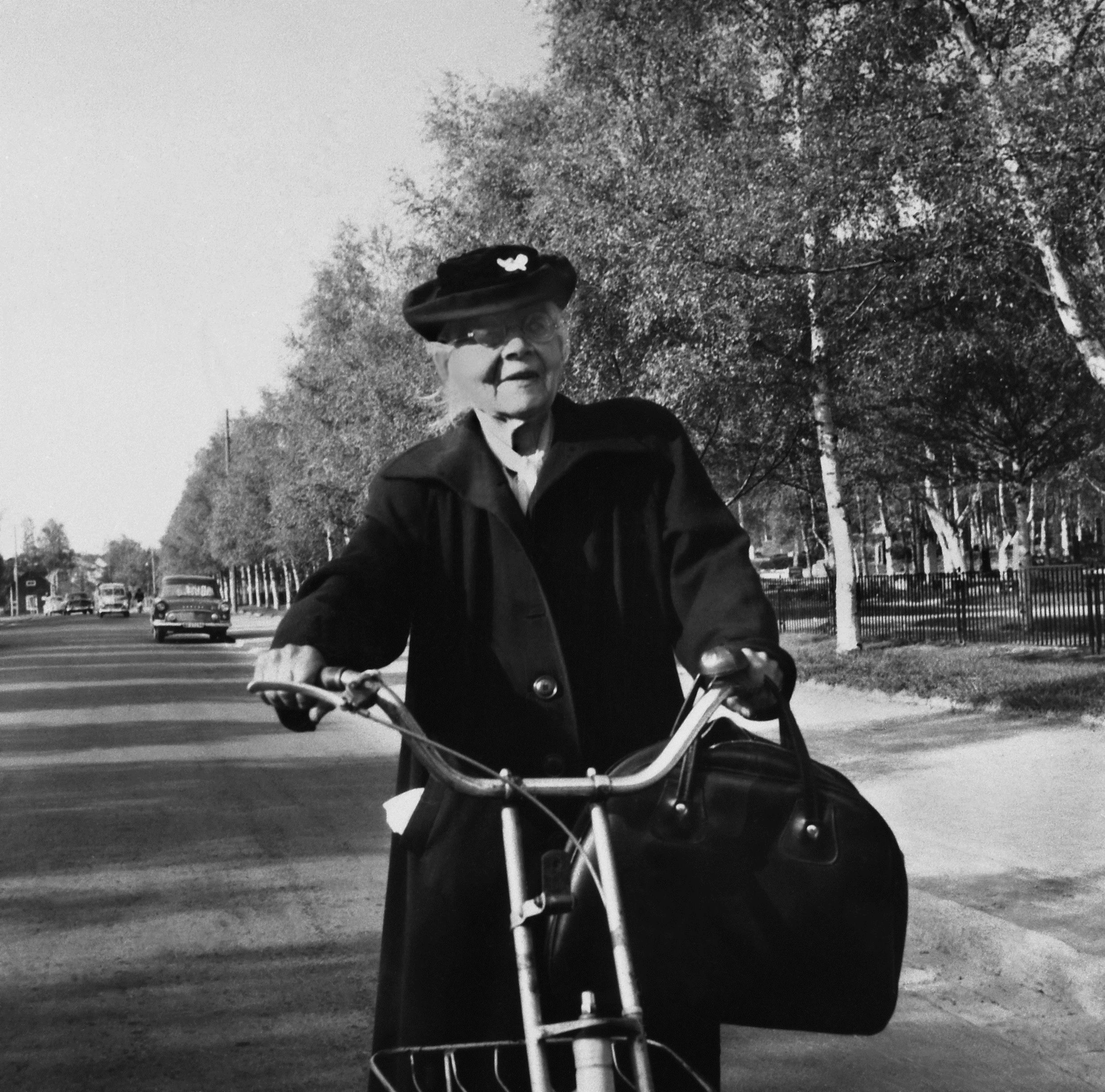