Sigrid Fridman was a sculptress, famous for several monumental works in public places.

Sigrid Fridman was born in Haparanda in 1879, the daughter of Karl Gustaf Fridman, a forester, and Mathilda Bruhn. She trained as a physiotherapist in Stockholm at what later became Arvedsons Gymnastiska Institut, AGI, and worked as a physiotherapist until her thirties, in London among other places. There she started to become interested in sculpture, which led to her moving to Paris in 1912. She received tuition at the free academies for four years and during the final two years she also studied under Antoine Bourdelle at the Académie de la Grande Chaumière, where Ninnan Santesson was also a student. Probably inspired by Santesson, she settled down in Gothenburg upon her return to Sweden. She introduced her artistry at two exhibitions, the first in 1917 at the art school Valand and the second in 1919 at Ny Konst. The reception was positive and resulted in several public assignments. The maritime insurance company Atlantica hired her for the renovation of the company’s prestigious building in Södra Hamngatan in Gothenburg, for which she designed the reliefs on the façade and set up two colossal animal sculptures in the vestibule: a walrus and a seahorse. The animals weigh about 2 tons each and were cut by the granite company Nordiska granitbolaget in 1920. About the same time, she took contact with the authority responsible for the building of the Gothenburg natural history museum, intended to be part of the jubilee celebrations in 1923. She was given the assignment of creating a well in front of the museum entrance, without participating in the competition for that purpose. The so-called Penguin Well (Pingvinbrunnen) in black granite is today enclosed in a courtyard after the entrance was relocated. Apart from private assignments, the daily newspaper Göteborgs Handels- och Sjöfarts-Tidning commissioned a portrait of its editors, Henrik Hedlund and Torgny Segerstedt, now hanging in the Segerstedt Hall in the Gothenburg University main building.

The years in Gothenburg were without a doubt the happiest and least conflict-ridden in Sigrid Fridman’s life. She was respected and supported by the Gothenburg Art Museum’s powerful director Axel Romdahl. At the jubilee exhibition, she was one of four women who were allowed to exhibit their works in the museum. In 1924 however, she moved to Stockholm, attracted by greater challenges. Battles were being fought there concerning the erection of a statue of Fredrika Bremer. A statue committee had already been formed in 1913 by the women’s suffrage committee’s Stockholm section (Föreningen för kvinnans politiska rösträtt, FKPR), represented by Kerstin Hård af Segerstad, Fredrika-Bremer-Förbundet with Sigrid Leijonhufvud at its head and representatives for Vita Bandet and Sällskapet Nya Idun. More than ten years later, the monument had still not been erected and neither had a competition been announced. The committee made the excuse that the money would not suffice for the competition prize. However, a few artists had sent in suggestions, among them Sigrid Fridman.

Two artists in the jury, Olle Hjortzberg and Hanna Pauli, advocated Sigrid Fridman’s suggestion while three were against. The four jury members in the original committee also tried to dissuade them. Despite the opposition, Sigrid Fridman carried through her idea about Fredrika Bremer as a wanderer: Vandrerskan. Her Bremer statue was unveiled in the summer of 1927 in Humlegården park in Stockholm, and was immediately exposed to derision. The culture critic Erik Blomberg saw “a little, meek and mild old woman with chickens, strutting through the grass, calling her chickens: clck, clck, clck". The art historian Ragnar Josephson considered that women’s “natural body forms” did not lend themselves to portrayals of historical people in any way whatsoever (back muscles and a knee were hinted at under Bremer’s clothing). After five months of bickering, two motions were handed in to the municipality to take down the statue. Anna Lindhagen had however a suggestion. She was of the opinion that people did not need to see the statue if they did not want to, since “there are so many paths through Humlegården, so that they, who on passing the Fredrika Bremer statue”, “get an irritating shock, must be able to avoid annoyance”. Today she still remains on her low granite plinth, confidently wandering forward with a slightly bent back, very unlike the gentlemen on their high pedestals in the same park.

In 1942 there was a new appeal for a collection for another statue of a woman. The committee for the erection of an Ellen Key statue was topped by Prince Eugen, Lydia Wahlström, Hanna Rydh and Amelie Posse. Sigrid Fridman had met Ellen Key a few times in 1923 and made a statuette of her. She enlarged it for the exhibition in the Gothenburg Konsthall in 1942. The sculpture showed a somewhat older woman with her hair combed flat and parted in the middle. She wore a loosely hanging pleated dress and stood with her legs wide apart in heavy, thick-soled shoes. Stockholm’s beauty council immediately rejected the sculpture because Ellen Key seemed not to be standing on her legs but on the hem of her dress and her hands seemed to be hanging unattached to her arms. Sigrid Fridman considered herself persecuted by the Stockholm art world. In a letter to Axel Romdahl she explained what she meant by a work of art, nota bene that it must be a spiritual condition: “technique, touch, anatomy, elegant craftsmanship [are] subordinate aspects. And where these disturb a spiritual condition [they are] unjustifiable”. After a thirty years’ production history, the statue was finally erected in 1953 in Jarlaparken in Stockholm, later renamed Ellen Key’s Park. On account of that, some art critics in the press wanted to found an association for the protection of Stockholm against works of art.

Stockholm had namely in 1939 been endowed with yet another monument by Sigrid Fridman. It shows a centaur, half horse, half man, standing on his back hooves and drawing a bow. The sculpture is very reminiscent of Bourdelle’s Herakles, purchased by Prince Eugen for Waldemarsudde. During Sigrid Fridman’s study years, it still stood in her teacher’s atelier and in all certainty inspired her. The first attempt to erect Kentaur on Norrmalmstorg in Stockholm was made in 1930, and thereafter followed nine years of polemics. Gustaf Näsström needed “a sixth sense to discover any beauty in this monumental monstrosity”. He lacked “a real man in the treatment of the Centaur”, but a compromise was finally reached allowing it to be erected on the hill Observatoriekullen. At midsummer in 1939, at half past midnight, Kentaur was unveiled – so that as little as possible could be seen of it, as Gotthard Johansson, another critic, supposed. For Sigrid Fridman, it represented the idea of a leap of life. In vain did she hope that two of her sculptures, Pomona and Hästtämjerskan would be placed outside the new city hall, Stadshuset. Instead the architect Ivar Tengbom accepted her reliefs with motifs from antiquity for the similarly newly completed Konserthuset.

Sigrid Fridman belonged to the intellectual network around Sigrid Leijonhufvud, Lydia Wahlström and others in Fredrika-Bremer-Förbundet. One important person was the literature critic Klara Johanson (K.J.). In 1924, when she portraying Klara Johanson, passion struck them both. They came to mean a great deal to each other for 24 years without either of them leaving their permanent life partners. Klara Johanson lived with the editor of Hertha, Ellen Kleman. Sigrid Fridman’s unfaltering companion for almost 50 years was the gymnastics teacher Ragnhild Barkman. They socialised frequently with other lesbian couples like Sigrid Leijonhufvud and the sculptress Sigrid Blomberg, with pleasure at Sigrid Fridman’s summer residence Mases near Rättvik. However, Kentaur was a representation of herself and K.J.: “we are a Centaur”, she wrote to Klara. She herself believed that her image as “Half man” may have contributed to her difficulties as an artist. Despite being the first woman sculptor to have her fine ideas carried into effect in public space, she is still not named in the standard work of Swedish art history, Signums svenska konsthistoria, published in the 2000s.

Sigrid Fridman died in 1963 in Stockholm. She lies buried at Borgholm Cemetery on Öland. In accordance with her will, her estate went to founding a fund for women sculpture students at Konstakademien (which she herself had not attended). Bursaries from this fund were handed out until the end of the 1990s. 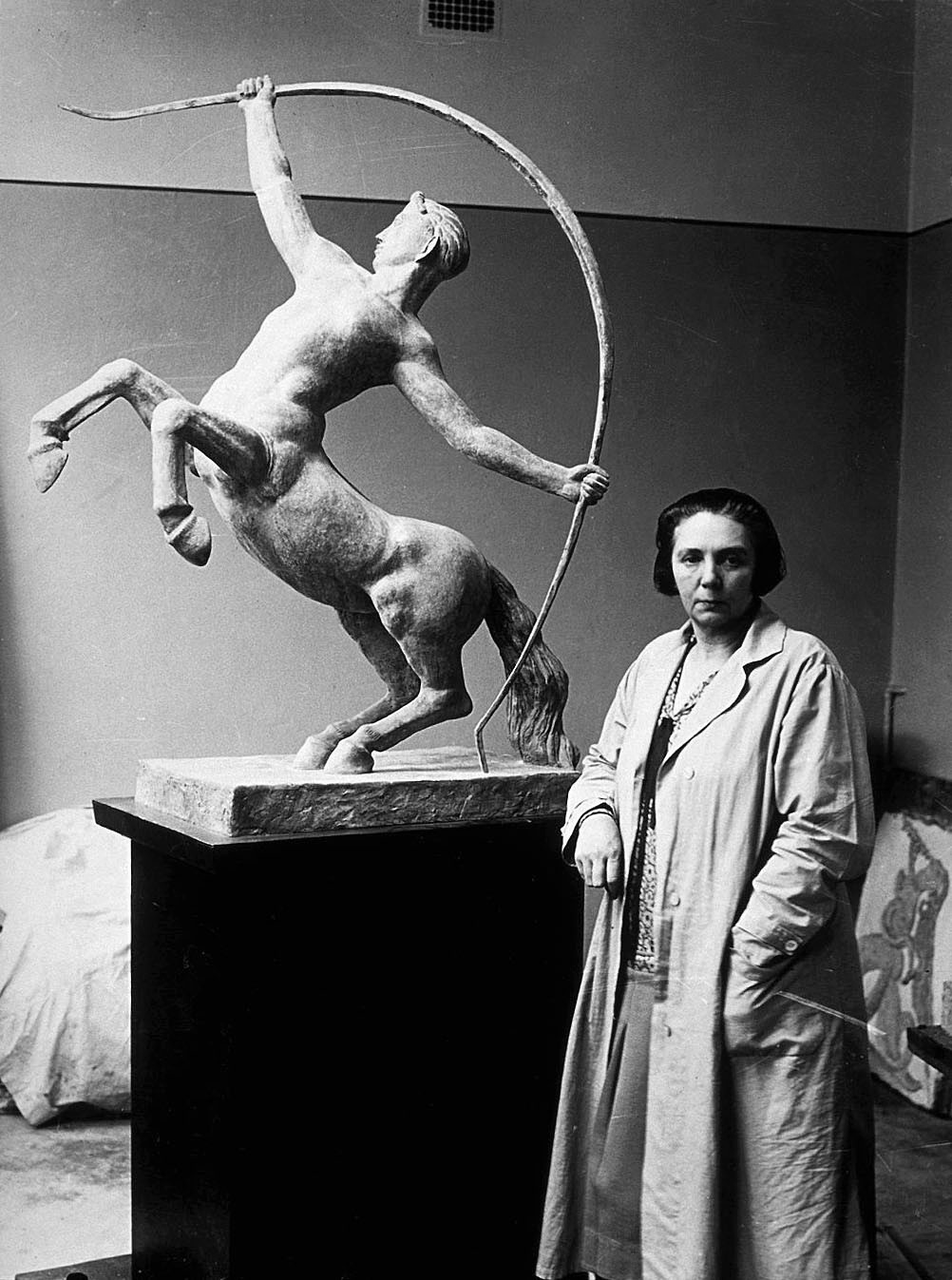