Signe Henschen worked actively for women’s issues and was the chairwoman of the Stockholm section of Fredrika-Bremer-Förbundet.

Signe Henschen’s life was influenced by her growing up in an intellectual upper-class family. She was the daughter of the bank man Ernest Thiel, then one of the wealthiest men in Sweden, and his wife Anna, née Josephson. When her father abandoned his family for a young woman, just when his wife was awaiting her fifth child, it created a scandal. Signe Henschen was then 14 years old and a pupil at Anna Sandström’s school. Two of her schoolmates were Honorine Hermelin and Harriet Löwenhjelm. They appreciated their education with its liberal and modern view of human beings, above all when it came to women’s place in society. Honorine Hermelin and Harriet Löwenhjelm continued with higher education, while Signe Henschen struggled to be allowed to marry.

Against her parents’ will, she succeeded in carrying out her wish to marry Olof Strange in 1904. Signe Henschen was then 18 years old, and the marriage ended in catastrophe. During the three years they were married, Olof Strange succeeded in gambling away parts of her fortune and then tried to carry away their son Ulf to force her to pay him even more money. Olof Strange committed suicide in 1941.

Signe Henschen soon met a new great love in Folke Henschen, a physician and professor of pathological anatomy. They married in 1909 and the marriage to him seems to have been happy to begin with. However, Folke Henschen seems also to have exploited Signe Henschen and her family, contacts and fortune for his own ends. After the birth of their five children, he dedicated all his time to his career and Signe Henschen was left alone.

Despite her turbulent private life, Signe Henschen’s life was filled with activity. She had a strong feeling for justice, was very empathetic with great compassion, and she had a burning engagement not least for women’s rights. Her contributions to Fredrika-Bremer-Förbundet created the framework for her daily life at the same time as she had her responsibility for her home and family. Meetings, articles, lectures and social gatherings filled her calendar and she was active in counteracting prejudices and the misuse of power. She gave 30 years of her life to Fredrika-Bremer-Förbundet, not only as the chairwoman for the Stockholm section but also in various international organisations like the International Alliance of Women (IAW).

She was also appointed by Stockholm City as a mediator between spouses who were in the process of divorce. In this way she also gained insight into the double standards and abuse of power that not seldom struck women. Undesired pregnancies, illegal abortions and betrayal were part of the stories she was to hear. In addition, it was shown that her husband – father of five and professor Folke Henschen – was unfaithful with other women. That led to a divorce in which Signe Henschen did not act as a mediator. One last great love met her later. The German brain scientist Oskar Vogt, who was married, became Signe Henschen’s final passion. The relationship was at a distance, but she also stayed in his home in Berlin where his wife also lived. It seems as though they came to an agreement about that system. The relationship was concluded upon the outbreak of the second world war.

Together with Amelie Posse, Signe Henschen started the Tuesday Club during the war, at which people with a feeling for peace were able to discuss and seek change. In this context, women also organised meetings around Sweden and were accused of communism and treason against their native country. As a Jewess, Signe Henschen met particular opposition.

Signe Henschen’s grandchild Helena Henschen has recounted the story of her life and history in the book Hon älskade in 2008. Those are also the words inscribed on Signe Henschen’s gravestone. She died in October 1969, and lies buried in a family grave in the Solna Cemetery. 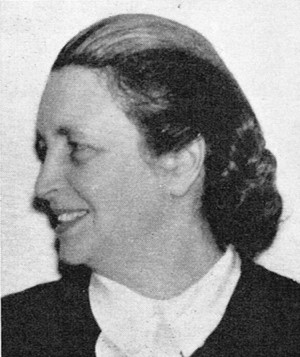