Selma Colliander was the first female university librarian in Lund albeit she never held that title as such. She also gained a doctorate in Germanic studies, ran the Red Cross deliveries of books to prisoners of war, and collected and published traditional folk ballads.

Selma Colliander was born on New Year’s Eve in 1861. She was the first child of Josua Colliander, paster of Svalöv, and Fredrica – known as Dica – the daughter of Johan Henrik Thomander, bishop and member of the Swedish Academy. When Selma Colliander was two years old her little sister, Gerda, was born and in 1869 her little brother, Edgar, came along. Although her maternal grandfather, the bishop, had already died by the time Selma Colliander was three, her maternal grandmother Emilie Thomander became an important figure for all three Colliander children. Selma Colliander often stayed with her grandmother and her maternal aunts at Tuna castle in Lund. She later wrote about the castle in an article entitled “Tunahemmet”, published in Lunds stifts julbok in 1933. Life in the family home at Svalöv parsonage was influenced by her parents’ humanitarian and intellectual activities. One of the driving aspects of Josua and Dica Colliander’s lives was their role in founding Enskilda studenthemmet in Lund, which offered room and board for poorer students. The Colliander children were themselves initially home-schooled by their parents, as well as by tutors and a governess. The latter described the two Colliander girls as “clever, both internally and externally” and both of whom possessed an unusual talent for self-directed study.

Selma Colliander’s teenage years remain a largely unknown quantity. Despite her aptitude for studying a fair amount of time passed before she gained a formal education. After spending two years undertaking language studies in Germany, Great Britain, Switzerland, and Italy Selma Colliander gained a job in 1894 as a language teacher at the girls' school Lunds fullständiga läroverk för flickor. It was presumably at this school that she became acquainted with Henrika Tornberg. Selma Colliander continued working at the school even whilst undertaking her university studies, right up to 1902.

Selma Colliander matriculated in 1900 as a private student at Lunds Katedralskola. At the age of 38 she entered Lund university to study English, German, and Romance languages. She gained her Bachelor’s degree in 1905, having gained top marks in all subjects. During the 1900–1901 period she had also spent time at a university in Berlin and she decided to make German the focus of her continued studies for a licentiate degree. This she completed in 1909, once again gaining top marks.

In 1912, now aged 50, Selma Colliander defended her doctorate, entitled Der Parallelismus im Heliand. Amongst those few women who gained their doctorate at this time it was the norm to focus on languages – Selma Colliander’s friend Hilma Borelius, for example, wrote her thesis on Swedish literature in 1909 – but the choice of German philology was not an uncontroversial one. Another thirty years would pass before another woman in Sweden wrote a doctorate in that field despite the dominant position the subject of German language enjoyed within Swedish universities in the 1910–1940 period. Selma Colliander’s thesis, written on the ancient Saxon religious epic Heliand, is a linguistic rather than a literary study. She largely disregards poetic-stylistic elements in favour of detailed textual criticism. Within the field her doctoral study was lauded for its philological thoroughness although it received criticism for its narrow syntactical perspective and for its lack of comparative material.

In gaining her PhD Selma Colliander had attained the academic summit available to women. As she was not eligible to apply for any docent positions, but she also wanted to remain at the university she thus applied to work at Lund university library. At this time women were still not permitted to be employed as librarians, but nevertheless, in 1913, she was taken on as an extraordinary assistant – which meant that she was allowed to work, unpaid, alongside the paid male assistants at the library. Selma Colliander, along with Anders Österling (later a member of the Swedish Academy) and others, resurrected one of the university library’s most neglected work areas, namely the indexing of legal deposits of offprints from various organisations and institutions. Although the legal deposits had continued as usual the work of organising and cataloguing these offprints had practically been ignored since the 1880s. Priority had instead been placed on preparing for a new card catalogue for which it had been the library’s first – and until then sole – female employee, [](Henrika Tornberg] life’s job to serve as clerk.

Alongside this Sisyphean task of updating the indexing of offprints Selma Colliander and the other assistants also performed other office duties. In 1915 Selma Colliander was promoted to full assistant, which finally entailed a formal salary, but the very next year she requested a sabbatical. As the First World War raged all around Selma Colliander, with the support of head librarian Carl af Peterson, travelled to Stockholm in order to volunteer for the Red Cross in supplying book packages to prisoners of war on both sides of the war. By 1916 the book collection had become so large that it became necessary to create a separate section for technical literature which, at the prisoners’ request, included academic publications. As a PhD and a representative of Lund university library Selma Colliander became responsible for this section from September 1916 until July 1919. In recognition of her efforts for the Red Cross Selma Colliander was awarded the Litteris et Artibus medal as well as medals from the Swedish, German, and Austrian Red Cross in 1920. Many hundreds of letters of thanks – now stored at Lund university library – provide evidence of the importance of her hard work.

Once Selma Colliander returned to Lund she continued working at the library’s Swedish department. She was now the highest paid of all the assistants and on several occasions throughout her working life she was called on to step in as librarian – although she could never hold this post fulltime due to being a woman. This regulation did not change until 1928 when women could formally be appointed as librarians. Selma Colliander had, however, retired in 1927. By that time she had left her mark on the library premises in a very concrete manner. She was very fond of flowers and so she implemented the hanging of flower baskets as well as the planting of around 10,000 flower bulbs in the park outside the library. The descendant of these scilla and gagea plants still bloom magnificently every year.

Following her retirement Selma Colliander began to combine her librarian skills with her interest in philology. In 1939 she published a comprehensive bibliography, annotated in detail, of her former colleague Anders Österling’s publications. Later she expanded it with further supplements, right up until 1943, the year before her death. By 1942 she had completed an almost equally comprehensive bibliography of another Swedish Academy member, her maternal grandfather, Johan Henrik Thomander’s written work. She and her sister Gerda had already donated their maternal grandfather’s large archive of letters and manuscripts – along with their maternal grandmother’s accounts and other assorted papers – to Lund university library in 1933. The cultural and historical value of this collection has been described as priceless.

Selma Colliander was very keen on music. By 1902 she and Alfred Borg, the director of music at the university, had already published a collection entitled Folkvisor. In 1916 she published Några folkvisor från Halland which included songs that she had collected herself, many of which were based on themes from the mythical world. She and Daniel Rydsjö co-edited an anthology called Den svenska dikten från äldsta till nuvarande tid, which was published in 1938. Selma Colliander was also an accomplished illustrator and some of her pencil drawings can be found in the university library plates collection. The exlibris which she ordered from the artist Baron Georg Fleetwood displays an interior scene with a vase of flowers on a window-sill and a comfortable reading chair beside a book-case, on which legible book-spines reveal her favourite authors and core interests: Österling, Hallström, Thomander, Didring, Shakspere [sic!], a couple of volumes on the Red Cross, and the Bible, all occupying the top shelf. Heliand lies on her seat, in the form of a scroll.

Selma Colliander spent the final years of her life in the historical building of Billegården 21 on Svanegatan in her beloved Lund. Although she never married, she was not a loner. The obituary she wrote for Hilma Borelius, published in Hertha 1932:2, describes dinners shared with mutual friends, while her colleagues’ words of tribute following her death in 1944 described her as loving, charming, and generous. She remained healthy and of sound mind until the end. She donated a sum of 5,000 kronor in her will to set up Stiftelsen Selma Collianders Premium, intended to award stipends to accomplished but poor students of philology “of testified good conduct”. 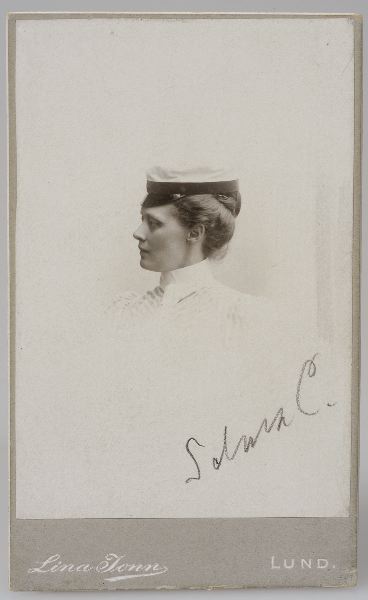