Sara Ranta-Rönnlund was a Swedish-Sami author who became famous for the four memoires she wrote about her childhood and her life among the Sami, the Tornedalen folk, and the settlers of northern Sweden.

Sara Ranta-Rönnlund was born in 1903 in Kalasvuoma Sami village (now known as Leivas’). She grew up within a nomadic reindeer-herding family. Her paternal grandfather was a wealthy reindeer-herder who often hosted Laestadian assemblies. She hardly ever attended school, albeit she did spend one summer at a special summer school which was particularly aimed at the children of nomadic reindeer-herders. Sara Ranta-Rönnlund later became a critic of the “Lapps should be Lapps” policy which entailed the segregation of Sami reindeer-herders’ children from other children by sending them to these special schools. These schools for nomads did not offer the same comprehensive education that was offered at Swedish public schools. Sara Ranta-Rönnlund taught herself to speak and write Swedish. Her mother-tongues were Sami and Finnish and the cultural environment as depicted in her books was largely a Sami- and Finnish-language one. This was the environment in which the Laestadian revival took a strong hold.

When Sara Ranta-Rönnlund got married for the first time – in March 1928 – she gave up the nomadic lifestyle and adopted a settled one. She spent eleven years living in the Laestadian villages of Nilivaara and Dokkas. Following the dissolution of her first marriage Sara Ranta-Rönnlund then moved to Gällivare where she lived with her second husband and her children. After the death of her second husband in 1953 she remained in the town for a few years as a widow. Her daughter from her second marriage, Eileen Rönnlund Holmberg, provides a dark view of that period in her book Måndagar med Kerstin: Om en resa till hunger och skräck, published in 2010. The book portrays the period following the death of Sara Ranta-Rönnlund’s second husband when her ex-husband began to harass the family. In 1958, when Eileen was eleven years old, the family moved to Uppsala where two of the children were studying. Sara Ranta-Rönnlund gave birth to nine children in total, of which two died in infancy.

Sara Ranta-Rönnlund provided for herself and her children in Uppsala by working as a cleaner, as home help, and as a factory worker. One of the places she cleaned was the Finno-Ugric department at Uppsala university. There she met Professor Björn Collinder and he encouraged her to write her memoires and her stories. He also helped her to find a publishing company which later published her four books. She would write at night after finishing her day jobs.

Sara Ranta-Rönnlund made her debut as a writer after retiring. In 1971 she released Nådevalpar: Berättelser om nomader och nybyggare i norr. Another three books containing her memoires, folklore, and stories about life in Lappland followed: Nåjder: Berättelser om trollkarlar och trolldom i sameland, published in 1972, Njoalpas söner: Berättelser om dagligt liv i norr, from 1973, and Sist i rajden: Berättelser om ett uppbrott, from 1978. Her story-telling style is influenced by the oral story-telling tradition of the Sami culture.

Sara Ranta-Rönnlund’s books, published by the Askild & Kärnekull Förlag in Stockholm made her famous and much sought-after. Ernst Manker, the well-known ethnographer and expert on the Sami, wrote a preface to the first book, commending her bold approach that enabled her to criticise and contradict well-travelled researchers, priests, or Laestadian preachers. One such researcher who visited Sara Ranta-Rönnlund’s home area was Herman Lundborg. The chapter entitled “Rasbiologen” in Nåjder: Berättelser om trollkarlar och trolldom i sameland recounts one of Lundborg’s visits to her hometown of Årosjokk: “This tall, greying man [Herman Lundborg] and his son were frequent guests at our home. I was entrusted with running errands for the learned man, and I willingly performed them.”

Sara Ranta-Rönnlund was entirely au fait with the Laestadian milieu as an insider. Her parental home was a deeply religious one and she herself used to attend the Laestadian assemblies. All of her books include depictions of Laestadianism. The title of her first book actually reflects the theme: “Nådevalpar” is an expression Laestadius used in reference to people who had become revivalists. Although she does not consistently portray Laestadianism in a negative manner, her memories of the preachers recall predominantly authoritarian and two-faced individuals. In revealing her personal development she recounts how she came to believe strongly in the advantages of modern society. The transitional era portrayed in her books concerns Sweden’s transformation into the modern welfare state and the modernisation of the country. Hellfire preachers, as well as wise old men and women, are anomalies within this environment and Sara Ranta-Rönnlund has no sympathy for them. Her books champion the benefits of modern society and of scientific achievements, including improved health care. Sara Ranta-Rönnlund’s belief in enlightenment, education, and progress left her with no nostalgia for life as it was before.

Sara Ranta-Rönnlund’s unsentimental view of the traditional reindeer-herding culture and her positive view of societal modernisation placed her in opposition to those groups who, during the 1970s, actively sought to protect and revive old Sami traditions. In her final book Sara Ranta-Rönnlund refers to critics of the Swedish assimilation policy as “tofsromantiker” (‘pompom-lovers’, idealists of traditional culture). Sara Ranta-Rönnlund emphasised that she in no way sought to contribute to “increasing the romantic hue surrounding Lappish life of bygone days”.

A pervasive theme of Sara Ranta-Rönnlund’s books is how much life had previously been influenced by superstition and the irrational and how hard that lifestyle had been, not to mention its debilitating impact on human health. Recurring themes include the patriarchal structures of and marginalisation of women in the traditional Sami milieus which she herself had experienced. For example, she describes how she became her brothers’ maid and was simply expected to work hard and without reward or encouragement. In his dissertation on Sami womens’ journeys towards becoming writers the specialist in Sami literature Vuokko Hirvonen highlighted how Sara Ranta-Rönnlund’s authorship displays an awareness about the lack of equality within traditional reindeer-herding environments. From her Uppsala vantage point Sara Ranta-Rönnlund could see the patriarchal and primitive aspects of the Sami social structure that she had grown up in, particularly when contrasted with the modern city environment she later found herself living in.

Traditional Sami society is also described as unfair from a class perspective. Her first book contains a chapter entitled “Riklappar och tjänare” in which Sara Ranta-Rönnlund compares the division of labour among the nomadic Sami of her childhood with “primitive folktypes”, “where women do most of the hard labour whilst men take it easy”. The chapter also describes the vulnerable position poor Sami found themselves in as servants working for “riklappar” (wealthy Lapps). Her final book portrays breaking away from the nomadic lifestyle, as well as the gradual disappearance of the nomadic ‘rajder’ (reindeer caravans) lifestyle from modern Sweden.

Sara Ranta-Rönnlund died in Uppsala in 1979. 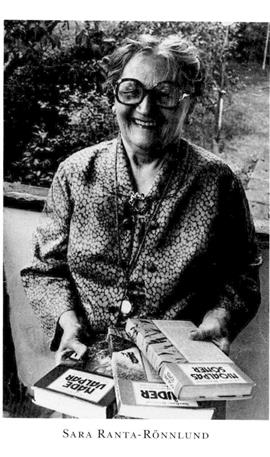