Ruth Stjernstedt was one of the earliest female lawyers in Sweden.

Ruth Stjernstedt was born in Hvena congregation in Hultsfred in 1879. She was the daughter of Kata Dalström, a socialist activist known for her publications, being a politician, as well as being a public educator. Ruth Stjernstedt’s father was Gustaf Dalström, a civil engineer. Ruth Stjernstedt moved several times during her childhood. When the family returned to Småland in 1893 her parents decided to allow Ruth Stjernstedt – who had great aptitude for learning – to attend and board at the French school in Stockholm. She gained her school-leaving certificate as a private student in 1897 and then went on to study medicine at Uppsala university from 1898–1900. She married Georg Stjernstedt, a lawyer and baron, in 1901. They had three children together. It was not until 1916, when Ruth Stjernstedt was already 37 years old, that she began to study law at Stockholms högskola (college). It was her experiences during the First World War, when her husband had been drafted, that made Ruth Stjernstedt understand the necessity of women being able to provide for themselves and their children. She gained her Bachelor of Laws in December 1921 with excellent marks.

Following the completion of her legal studies Ruth Stjernstedt began to work at her husband’s law offices. After serious consideration she decided not to undertake court-room service. She and her husband both decided that this would be impractical given their three children at home and the long commutes that would be required between their house in Lidingö and any of the court houses near Stockholm. Thus for some time Ruth Stjernstedt was, as she put it herself, an ‘errand girl’ at her husband’s office.

Ruth Stjernstedt was extremely interested in matters of family law and she wrote two books on the subject, namely Makars rätt i äktenskap, published in 1923, and Om adoption, published in 1925. Following Ruth Stjernstedt’s acceptance into the Swedish Bar association in 1926 – only the fourth woman to do so – she became a lawyer. Ruth Stjernstedt found working as a lawyer not only interesting and exciting but also full of responsibility and challenging. For example, she served as the defence lawyer for the Syndicalist newspaper Arbetaren in a much-noted case of libel.

During the second half of her life Ruth Stjernstedt was active in many associations, several of which aimed at improving women’s standing in society. Amongst other things she was a member of Föreningen för kvinnans politiska rösträtt (FKPR) (association for women’s suffrage) and a member of the Fredrika-Bremer-Förbundet (association) executive committee. She was also active within the Akademiskt bildade kvinnors förening (academically qualified women’s association). As chair of Svenska Kvinnoföreningarnas radiokommittée (Swedish women’s associations’ radio committee) from 1933–1944 she actively fought to see women’s perspectives gain their rightful place in the development of what was then a new form of media. From 1938–1946 she was also chair of Kvinnoföreningarnas beredskapskommitté (womens’ associations’ war years committee), an organisation tasked with accepting and delegating women’s voluntary efforts. This committee united organisations which held a variety of views regarding defence matters and was significant given that 800,000 women were registered as offering their service in 1939. Ruth Stjernstedt was in favour of military defence and defined herself as a ‘kanonkvinna’ (woman who was pro-military). Her political allegiance lay with Folkpartiet, and for a time she was a member of the executive committee of that party’s women’s association.

Ruth Stjernstedt spent most of her life living in Lidingö. She died on 3 November 1954. She is buried at the Norra cemetery in Solna. 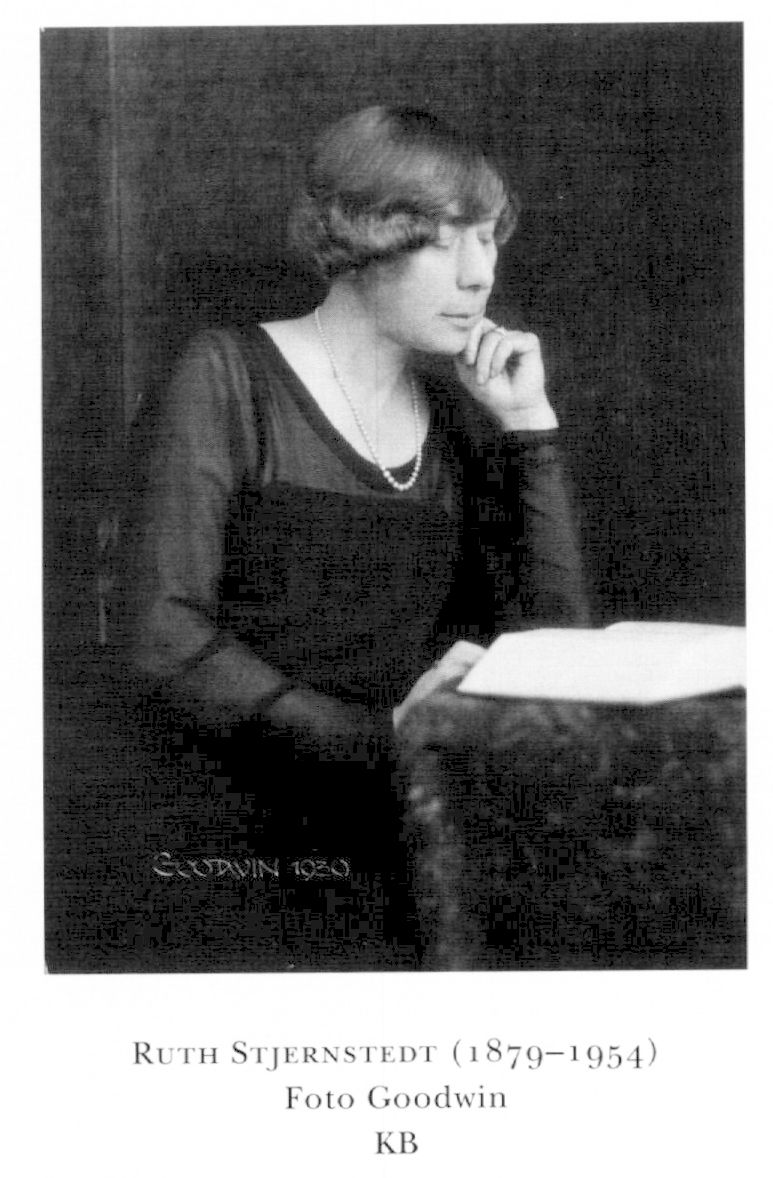