Ragnhild Sandström was born in 1901 and grew up in Umeå, the eldest of the three daughters of Hilda Maria Andersson, née Westman and Andreas Andersson, a farmer. After her basic schooling and a preparatory course, she applied to the elementary teacher training college in Umeå (Umeå Folkskoleseminarium) in 1918 where she qualified in 1922. The year after, she took a post as an elementary schoolteacher in Överboda, a village just west of Umeå. She had that job all her life, even if she had time off during her years in parliament.

As early as the 1920s, Ragnhild Sandström had started writing in the liberal Västerbottens-Kuriren in which she had a permanent column: “Life in the country”. The conservative Umebladet, the liberal Norra Västerbotten and the liberal but short-lived Norrbottens-Tidningen all took in articles by her. She wrote chatty columns as well as debate articles and factual reports. In the major national evening newspaper Expressen, she wrote regularly during the 1940s and 1950s, often on political issues. During her whole life, she was a contributor to Västerbottens-Kuriren and commented that its liberal, free-thinking ideals facilitated her choice of joining the liberal Folkpartiet when it was time for her entrance into politics.

Ragnhild Sandström lived in Överboda for a long time, where her time was shared between the children in her school and her writing. In 1937, however, there were several changes. She married Nils Hugo Sandström, the owner of the sawmill in Överboda and the couple had three children. That same year, she joined the Fredrika-Bremer-Förbundet (FBF) and it was then that her involvement grew in matters outside her school profession and her journalism. The same year as Ragnhild Sandström became a member of the FBF, new efforts were being made to increase women’s representation in parliament. The committee for increased women’s representation was started and was active in every election until the end of the second world war. In Umeå, they followed these developments, and in 1944, the FBF and the county women’s organisations acted with all their might to put a woman in parliament as a representative for Västerbotten. At their annual general meeting in February 1942, Ragnhild Sandström had been elected secretary on the FBF board for the Umeå branch, and she was profoundly engaged in the campaign for increased women’s representation. Their work was successful, and for the parliamentary election in 1944, all the parties had women on their lists. Ragnhild Sandström stood high up on the liberal Folkpartiet’s list, and it was then the next-largest party in the county of Västerbotten. She was elected, and was the first woman to represent Västerbotten from 1944 until her death in 1960. In 1944, she represented not only Västerbotten but she was also the only liberal woman to be elected to parliament at that year’s election. Altogether, however, it was a disappointment, since fewer women were elected. Now there were 18 women and 212 men in the second chamber. Of those 18 women, 13 were social democrats, two were communists, two were right-wing and only one, Ragnhild Sandström, was a liberal from Folkpartiet.

Once in parliament, Ragnhild Sandström did not see herself as first and foremost a representative for women, but was rather of the opinion that all so-called women’s issues were basically issues for the whole community. The first debate in which she participated was about changing the legislation on abortion after a population survey and an interpellation in parliament afterwards. In 1945, she took up the issue of pregnancy tests only being carried out at maternity centres. The issue of abortion was brought up again in 1953 when it was suggested that the right to abortion should also include social factors. Ragnhild Sandström wrote an article in Socialmedicinsk Tidskrift in 1954 in which her argumentation shows that she supported this suggestion. Ragnhild Sandström gained a place on the legislation committee. In 1949–1957, she was an elector at the municipal council elections and also for a period for the ombudsman elections. Furthermore, she had a place on the Nordiska rådet from 1951. She was state accountant in 1956–1959, initially as a substitute. Ragnhild Sandström had in her political work a distinctive Northern Swedish perspective. She dedicated herself especially to forest economy and transports as well as the need for a new ice-breaker. Communications, locally and regionally, were urgent issues. She also considered that domestic air traffic, like the air traffic between Nordic countries, should be further developed. In Umeå, the liberal Anna Grönfeldt had as early as 1916 moved that Umeå should have an airport. Ragnhild Sandström was also very positive to opening a university in Umeå. During her time in parliament, she sat on several committees and surveys. The government alcohol monopoly was started in 1955 and Ragnhild Sandström sat on the board from 1957 until her death in 1960. Her intensive political activities led to her being awarded a royal medal, the Vasaorden, in 1953.

In Umeå and Västerbotten, Ragnhild Sandström had a place in the county council for almost the whole of the 1950s, and as the representative for the Umeå landsförsamling, she was also a member of the municipal council in 1953–1959. Furthermore, she was the chairperson of the Folkpartiet’s electorate during the same period and also served from 1954 in the party’s board of trustees. Despite the fact that Ragnhild Sandström did not primarily want to be classified as a woman politician, she became the chairwoman of the Folkpartiet’s women’s association in Umeå in 1949–1954. Her parliamentary work demanded that she read masses of material and she complained that her great interest in history and literature had to take a back seat. That was compensated for perhaps by her engagement in her local district association and her interest in the county museum and the open-air recreation area of Gammlia.

Even while Ragnhild Sandström’s days were filled with work, she took time to write the manuscript for a film that the film-maker Rickard Tegström from Umeå planned to make on the occasion of the building of the Stornorrfors hydroelectric power station. The film was entitled Nära älven.

Life was filled with work for Ragnhild Sandström. She had barely begun her course as a member of parliament before she was widowed and became a sole parent for three small children aged four to eight years old. Her sister Gerda Andersson moved into their home in Överboda where she spent the last years of her life looking after Ragnhild Sandström’s children and household. In 1948, her sister Ingrid Källström and her family purchased a property in Teg in Umeå where Ragnhild Sandström with her children and sister Gerda also settled down. When Gerda Andersson died, her sister Ingrid and family remained in the house and were able to support the Sandström family. A daily maid was employed to take care of everyday life with the children when Ragnhild Sandström was in Stockholm for several weeks at a time.

Ragnhild Sandström was given the epithet Umeå’s own “Delsbostinta” (in reference to Ida Gawell-Blumenthal). She was truly a good storyteller, quick in repartee, with a drastic humour and an unconventional image for a liberal politician from Västerbotten. She organised lively parties with music, smoked Chesterfields with pleasure and lifted a glass or two with her guests. Behind her elegant appearance, stylish hairstyle and forthright behaviour, there was a woman who however had shaky health. Nobody knew their physical weaknesses better that she did herself. She suffered now and then from heart and lung problems and was off sick. On account of another illness in the spring of 1960 and a heart infarct in the early autumn that year, she was doubtful about standing for yet another period in parliament. In December 1960, she participated in a debate of great significance to her. She had handed in a motion that was then to be dealt with. It concerned the supervision of the State forestry industries’ economic status that she moved should be investigated by independent expertise.

After her speech, she walked back to her seat where she collapsed and died immediately of a heart infarct, at 59 years of age.

Ragnhild Sandström lies buried with her husband in Backen Cemetery in Umeå. 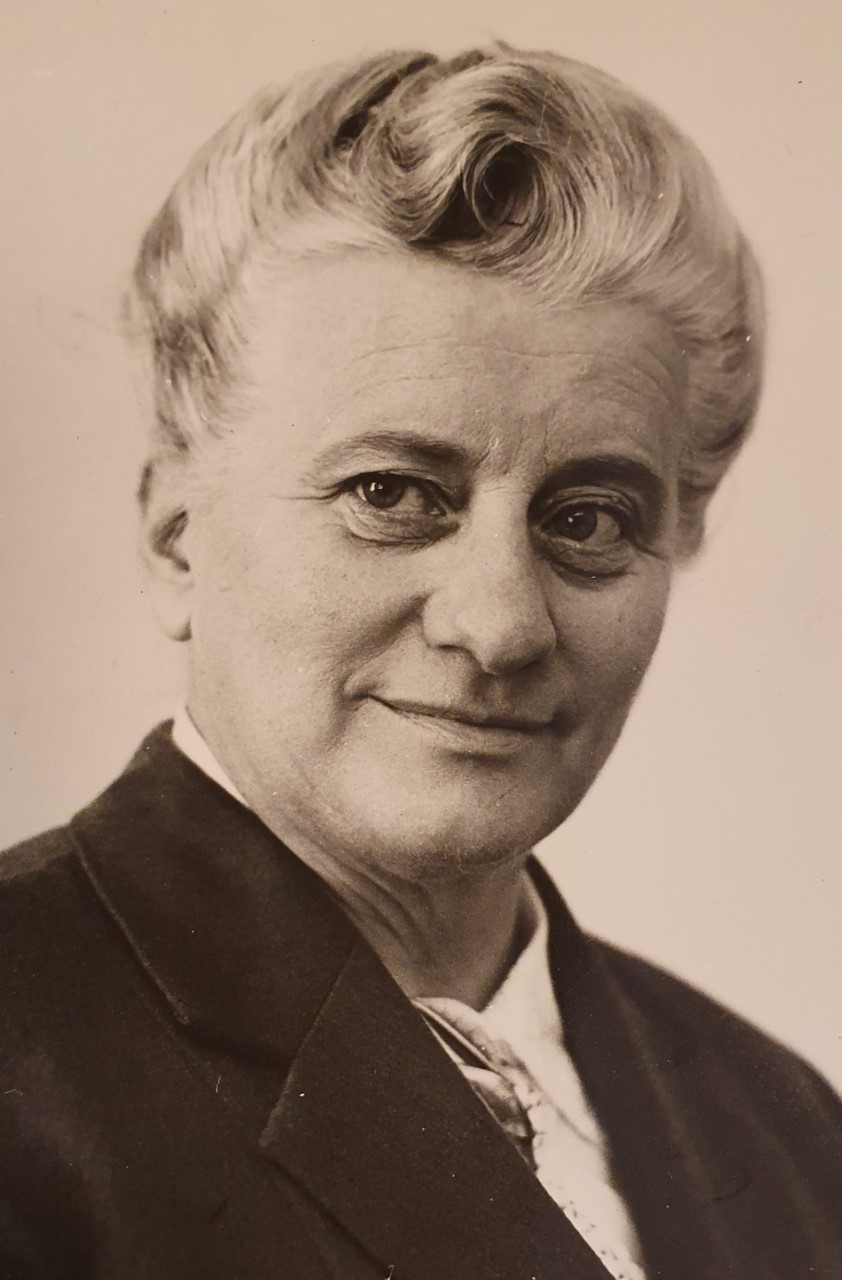