Olivia Nordgren was born in the Gislöv area in Scania in 1880. She was the daughter of an agricultural worker and was forced to move from relative to relative throughout her childhood. At the age of 14 she made her way to nearby Trelleborg where she was taken on as an apprentice typographer for the town’s newspaper, Trelleborgs Allehanda. She was the only woman at her workplace. She worked there, bar a few shorter breaks, until 1911. It was her desire for knowledge which led Olivia Nordgren to choose this career. She gained a solid foundation in politics by typesetting reports on debates in the city council and in parliament, which served her well in her later political activism. During her newspaper years, Olivia Nordgren gave birth to three children, one of which died at a tender age. Father of the children was the printer Adolf Sandberg in Trelleborg. In the year 1908, Olivia Nordgren got married to Seth Nord, who was the local editor at the newspaper Arbetet, and they took the surname Nordgren. The couple’s joint daughter was born in 1909. At that time Adolf Sandberg had passed away and the earlier children of Olivia Nordgren were also living with the Nordgrens.

Olivia Nordgren soon became active in both trade unionism and politics. She was a member of the board of the local section of Typografförbundet (typographers’ association) in Trelleborg from 1908 until 1922. During this period she also held various positions of responsibility. She was also active in the Social Democratic party, first in the local youth movement and the women’s movement and later in Trelleborg’s “arbetarkommun” (labour commune). Here too she came to hold various positions of responsibility.

Women’s demands for suffrage, namely that they should be allowed to vote in elections to the second chamber of parliament, were once again overlooked in the 1909 voting rights reform. However, the reform did entail some benefits for women. The reform meant that women – even, under certain circumstances, those who were married – became eligible to stand for election both for municipal and town councils. It was Anna Bugge Wicksell, a legal practitioner, who confirmed this and with that the women’s suffrage movement initiated a comprehensive campaign to populate the electoral lists with women. Olivia Nordgren was one of the married women who used her right to represent her party in her hometown, a decision for which she received support. In 1915 she was elected onto Trelleborg town council, and remained so until 1934. She sat on various authorities and boards, including being a member and director of the town’s provisioning authority during the First World War.

Following the voting rights reform of 1919-1921, which gave women universal and equal suffrage, Olivia Nordgren was elected both into Malmöhus county council, 1923-1950, and into the second chamber of parliament, 1925-1952. At the same time she was also elected into the Social Democratic party’s national board which meant that she did not have much time left for local party political work.

Olivia Nordgren had already been included in the first parliamentary list after the voting rights reform in 1921, but she had some doubts about being elected given that her youngest daughter was still very little. As she stated on several occasions, she believed that it was best for both children and for society if young children were cared for within their own homes by their own mothers. She was, however, also an outspoken opponent of every attempt to limit women’s rights to work. She expressed this belief at her very first parliamentary session when married women’s rights to work were up for debate and being questioned. She stated loudly and clearly that the right to work should be enshrined irrespective of civil status or gender.

Olivia Nordgren did not see herself primarily as a women’s representative. She emphasised this in an interview at the time of her retirement. Given that her political activities mainly concerned social matters this nevertheless resulted in her mainly being involved in issues which were of particular relevance to women. These included health care, conditions for the elderly, provisions during the war, conditions for maids, and the management of social care. She was particularly interested in issues regarding pension. She worked within various commissions and committees to improve the situation of the elderly, to introduce orphans’ benefits, and to bring an end to the unfair treatment of women within the pension laws. She was also one of the driving forces behind the widows’ pension reform.

Olivia Nordgren also contributed to popular education and public debates by publishing on the issues she worked with. In 1945 she received the Illis quorum medal of the 12th degree in recognition of her civic contributions.

Olivia Nordgren died in 1969. She is buried at Västra cemetery in Trelleborg. 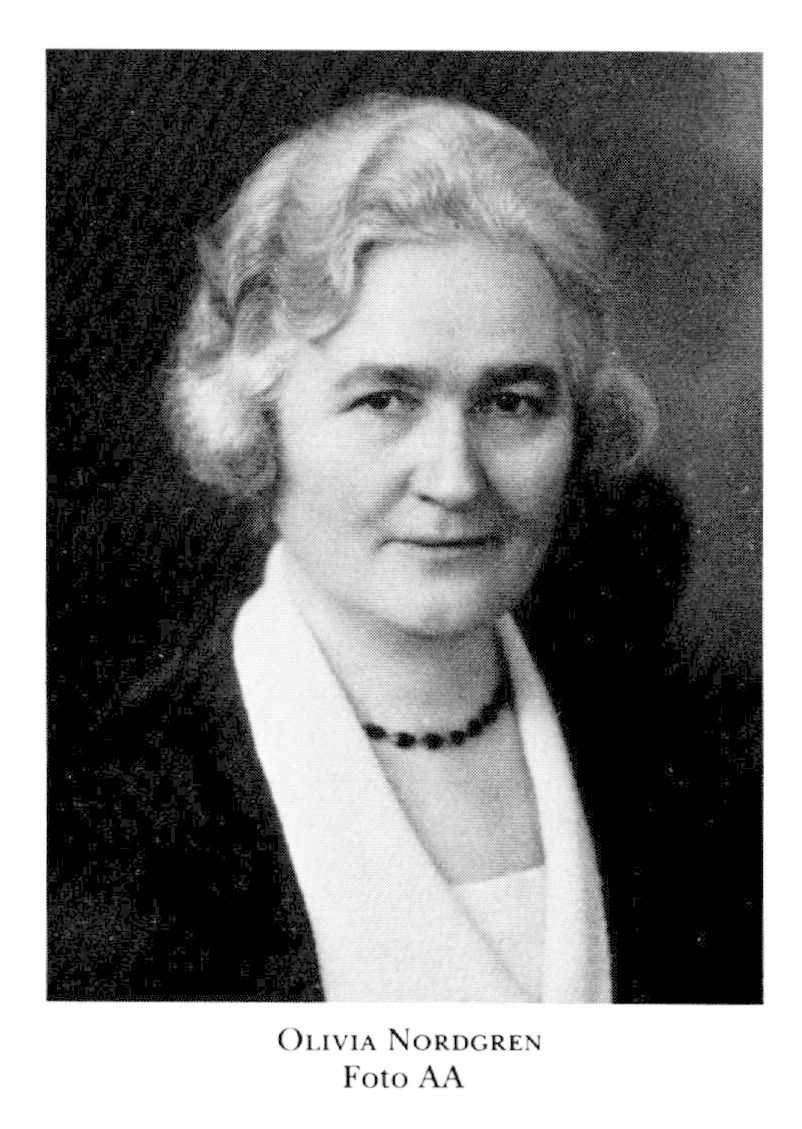