Nell Walden was a pioneer of abstract art and an art collector. Together with her husband, Herwarth Walden, she ran the expressionist newspaper Der Sturm’s gallery in Berlin during the 1910s and the 1920s.

Nell Walden was the oldest of five children in a clerical family from Scania. Her father, Frithiof Roslund, was a military preacher in Karlskrona, then assistant vicar in Trelleborg, and later vicar in Landskrona. Her mother, Hilda Smith, was descended from a wealthy family of Scottish origin. When the family moved to Landskrona, Nell Walden initially stayed behind with her maternal grandparents in Trelleborg in order to complete her education at the girls’ school there. Her maternal grandfather, the consul Carl Smith, was a wholesale merchant and a ship owner in Trelleborg.

Having graduated from Trelleborg Elementarskola för Flickor (foundational school for girls) in 1904 Nell Walden started studying music in Lund. In 1908 she graduated as an organist in Växjö, but she appears only to have made use of her skills intermittently at her father’s church in Landskrona. In the summer of 1907 she had taken language courses in Lübeck and then, in the spring of 1909, she continued studying music in Berlin along with her sister Stina. In 1910 she became engaged to the architect Folke Bensow and that year the couple went on a study trip to Berlin, Dresden and Prague. However, Nell Walden broke off the engagement when she moved to Berlin in 1911. She gained her artistic training at the Der Sturm art school in Berlin. She was a student from the very founding of the school in September 1916 and for a few years afterwards. There are no detailed sources on the art school but it is probable that her painting teachers were the German artists Rudolf Bauer, Georg Muche and Lothar Schreyer.

In 1911 Nell Walden met Herwarth Walden (actually Georg Lewin), the man who would become her first husband, when he was visiting his sister, Gertrud Schlasberg, in Landskrona. In November that year Nell Walden became a governess for a German-Swedish family in Berlin, at which time she renewed her acquaintance with Herwarth Walden. The couple married in a civil ceremony in London on the 23 November 1912. Their relationship was characterised by their professional collaboration within the framework of Der Sturm. At Nell Walden’s request the marriage was dissolved in 1924, but they continued to work together professionally for another year. In March 1926 she got married again, this time to the Jewish doctor Hans Heimann. As a result of the Nazi rise to power in Germany the couple separated for tactical reasons in the spring of 1933. Their hope was that Nell Walden could repatriate herself elsewhere as a Swedish citizen and thereby provide a secure refuge beyond Germany’s borders for Heimann. She settled in Switzerland in October 1933. Heimann was arrested by the Gestapo in 1937 and was sentenced to four years’ imprisonment. Nell Walden visited him in prison in Luckau near Berlin in the summer of 1939. In July 1940 she remarried for a third time to a Swiss called Hannes Urech. With his help she managed to obtain a Swiss visa for Heimann, who had been denied the right to travel upon his release from the Luckau prison in the summer of 1942. Heimann was deported from Berlin on 15 August 1942 and was executed on arrival in Riga three days later. Nell Walden remained a Swiss resident until her death.

Nell Walden, through being Herwarth Walden’s private and professional partner, quickly became a focal element of the Der Sturm transnational network of authors and artists. She contributed to the newspaper’s growing focus on visual arts and the establishment of the Der Sturm gallery in 1912. The Waldens undertook comprehensive travels through Europe in 1913 in order to recruit artists for Erster Deutscher Herbstsalon organised by Der Sturm. This came to be a voluminous and significant exhibition with around 360 pieces of art by approximately 80 artists of the international avant-garde, including Umberto Boccioni, Marc Chagall, Sonia Delaunay-Terk, Wassily Kandinsky, Paul Klee and Gabriele Münter.

During the First World War the Walden’s collaborated with the German authorities. Under the title of Svenska Underrättelsebyrån Der Sturm, Nell Walden, as a foreign correspondent, provided Swedish daily newspapers with news from the war from a German perspective, as well as news of Berlin’s cultural and social life. She also translated Scandinavian press accounts of the war for the German authorities. Her work was exceedingly lucrative and ensured that Der Sturm’s gallery and newspaper not only survived but also expanded during the war years. From 1912 to 1923 she helped to organise about 20 travelling exhibitions across Scandinavia, arranged by Der Sturm.

Nell Walden’s work as a correspondent and translator during the First World War provided the economic resources to seriously begin collecting art. She regularly bought art which Der Sturm exhibited, whilst also collecting so-called ethnographic pieces. By 1915 she had such an extensive collection that the Waldens could use it as promotional material for Der Sturm. They had several catalogues printed and from 1916 onwards the couple held public showings of the collection at set hours in their private residence. Nell Walden’s second husband, Hans Heimann, also had an interest in ethnography and during their marriage Nell Walden’s collection of ethnographic material increased significantly.

Nell Walden began her career as a self-taught artist in 1915. Initially she painted in oil, created art on paper, as well as so-called reverse glass paintings. Some of her earliest pieces were inspired by Swedish rustic art. However, figurative painting came to be of little importance in her artwork which mainly focused on abstract compositions, sometimes with references to landscapes, greenery and nature. The majority of her output – which comprised over 6000 pieces – consists of what she called “colourful drawings”, namely watercolour paintings, gouache, tempera and pastels on paper, wood and other materials. She sometimes experimented with mosaics, sgraffito, and collages and also painted furniture, ceramics and book covers. Her public debut as an artist occurred at an exhibition of her collection at the Der Sturm gallery in Berlin in July 1916. That year her paintings were exhibited as part of Der Sturm’s travelling exhibitions in The Hague and Brünn. From 1916 to 1925 she showed her work on approximately 60 different occasions at the Der Sturm gallery in Berlin, and at six of these she was the main attraction, along with the likes of Arnold Topp, Tour Donas (Marthe Donas) and László Peri. She was also frequently shown during the Der Sturm travelling exhibitions across Germany and other European nations during this period. From 1926 she was a member in the artists’ association Die Abstrakten – Internationale Vereinigung der Expressionisten, Futuristen, Kubisten und Konstruktivisten e.V. and she regularly exhibited at Grosse Berliner Kunstausstellung. In 1927 she had a solo exhibition of about 50 of her own works as well as pieces from her collection at Galerie Albert Flechtheim in Berlin.

Nell Walden was also a productive author and published a number of poems under the pseudonym of Marja Enid in the newspaper Der Sturm. In 1933 a collection of poems entitled Unter Sternen was published by Verlag Felix Stössinger. Nell Walden had brought her basic Christian outlook on life with her from Sweden and within the Sturm-circle there was a growing interest in the religious, spiritual and cosmic aspects of art and life. During the 1920s and 1930s Nell Walden deepened her knowledge of astrology. She made horoscopes for artist colleagues and friends and kept an astrological diary right up until her death.

In 1932 Nell Walden moved a significant portion of her art collection to Switzerland. This saved many works from the Nazi plunder. The collection and her own work were displayed in several major exhibitions in Switzerland during the 1944-1946 period. Through the travelling exhibition organised by Riksförbundet för bildande konst ”Der Sturm. Samling Nell Walden” she displayed about 80 pieces of her privately owned expressionist, cubist, and futurist work in various places in Sweden in 1954. From the 1950s onwards her collection was broken up, partly as the result of a major auction in Stuttgart in 1954 and partly as the result of a number of donations made to Moderna museet in Stockholm, Kunstmuseum Bern, and Landskrona museum.

From the second half of the 1940s until her death Nell Walden worked tirelessly in an effort to ensure that Herwarth Walden and Der Sturm had a place in art history. She published two memoirs, Der Sturm. Ein Erinneringsbuch an Herwarth Walden und die Künstler aus dem Sturmkreis, 1954, and Herwarth Walden. Ein Lebensbild, 1963.

Nell Walden died in Bern in 1975. Her ashes were dispersed in the Sound. There is a memorial stone for Nell Walden at the new cemetery in Landskrona. 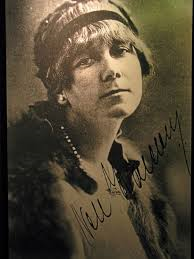