Naima Wifstrand was a celebrated operetta singer as well as a film and stage actor throughout the first half of the twentieth century and beyond.

Naima Wifstrand was born on Kungsholmen in Stockholm in 1890. Her parentage has not been recorded. Her foster mother, Hilda Lindström, was an unmarried woman who fostered several children and sometimes took in paying lodgers in the various homes that she lived in within the poorer areas in Stockholm. Naima Wifstrand describes Hilda Lindström as her mother in her life memoires, in which she also mentions her foster siblings, Henny and Ludde. Naima Wifstrand enjoyed a good relationship with her foster mother and talked of her warmly.

Naima Wifstrand’s performing talents gained recognition from many people from the time she was young. One such person was the owner of the sewing-goods shop who showed her an advertisement placed by Anna Lundberg, a theatre director who was in search of students. Lundberg in turn introduced Naima Wifstrand to August Bodén, the head of an operetta company, who would go on to employ her just a year after she made her debut with Lundberg. Yet another important mentor for Naima Wifstrand was the opera singer Matilda Jungstedt, who gave her free private tuition and arranged for her to receive a stipend to travel to London in 1910. Whilst there Naima Wifstrand had the chance to study with the famous teacher, Raymond von zur Mühlen, who was himself a tenor.

Naima Wifstrand was an admirer of Matilda Jungstedt and watched her devotedly when she sang the title role in Franz von Suppé’s operetta Boccacio, performed at the Oscar theatre in 1907. Naima Wifstrand also appeared in that production herself as a member of the choir. Her next professional step was singing a minor soprano part in the operetta. During its third season she took on a more demanding role as Beatrice, one of Boccacio’s flames. Two years later Naima Wifstrand followed in her mentor’s footsteps by singing the lead role. This gradual advance toward leading parts was typical of the usual route to becoming a professional at a time when there were very few performing arts schools. Naima Wifstrand herself believed that the best, most practical such school was in fact the Swedish countryside.

At this time the head of most of the private theatres, such as the Oscar theatre and the Vasa theatre – as well as Stora teatern in Gothenburg – was Albert Ranft, known as the “king of the theatre”, who supported Naima Wifstrand. He was also in charge of touring theatrical groups in which she performed leading roles. Naima Wifstrand’s first book of memoires, which dates from 1930, is entitled Mitt liv – min koffert, and indeed she spent the first half of her life travelling and described herself as a natural nomad. These theatrical tours took her throughout Scandinavia as well as into Great Britain, where she twice undertook lengthy performance seasons, the last of these during the 1931–1932 period.

It was, however, the Oscar theatre which became Naima Wifstrand’s “home” theatre. It was there she had her greatest successes as an operetta singer. Her performance as Sylva Varescu in Czardasfurstinnan is often mentioned, but one could just as easily mention her rendition of Hanna Glavari in Glada änkan, Odette in Bajadären, or O’Mimosa San in Geishan which was her first hit in Helsinki. The audience was moved to tears by her version of Visan om Guldfisken in 1906. One of her more intriguing roles was in the aforenoted Boccacio which Naima Wifstrand called “the operetta of operettas”. Boccacio is a so-called cross-casting role in which a female singer performs a male part. Naima Wifstrand was naturally a soprano but she had quite a broad register in the lower range of notes. She had a deep speaking voice which became deeper with the passage of time, something she felt was not appreciated by the public. In fact, following a quarter century as the queen of the stage, dressed in magnificent costumes and enjoying the audiences’ cheers, she faced a series of setbacks.

After 20 long years of hard work and thousands of performances Naima Wifstrand’s voice began to fail. She had appeared as Sylva Varescu on 1,036 occasions alone. Her vocal cords were worn and constantly inflamed. In 1926 a cyst was discovered in her left vocal cord requiring an operation two years later. She had already appeared in a spoken stage performance at the Lorensberg theatre in Gothenburg in the autumn of 1924. There she had appeared in Systrarna och främlingen, written by Bruno Frank. She won acclaim from both critics and the director but it was a long time before she was offered any further roles. She also put her hand to directing and for a while ran her own theatre at Vattugatan 11 in Stockholm. When she put on Teaterbåten in 1932 the production was deemed to be a fiasco. For the rest of the year and during 1933 she performed at Wigmore Hall in London and sang Pierrot songs to her own accompaniment on the guitar. She returned to the medium of film for the second time in 1931, appearing in a short as Pierrot, once again in a cross-casting part.

Naima Wifstrand was a celebrity figure who became the focus of newspaper attention whenever she attended a theatrical production, a film premier, or went to a restaurant. She socialised with the famous cultural figures of the day and her clothes – both her own and those she donned on the stage – were reviewed in detail. She was sought out for her views but she remained closed about her private life right up until her final years. She had married a Norwegian officer, Captain Erling Nielsen, in 1921 but their union did not last and the couple split up in 1928. She only mentions her husband once in one of her memoires when discussing a fun-filled masquerade party. Her beloved foster mother died in 1939. Although there is no mention of this in her memoires either, she does admit that the period around the turn of the year 1939/1940 was a time of severe crisis for her.

It was perhaps her activities in London – playing Pierrot both on stage and on the screen, and its connotation with commedia dell’arte – which led Naima Wifstrand away from the heavily conventional acting style of the operetta stage to a completely different form of theatrical expression. The main reason behind this may rather have been her collaboration with her Gothenburg colleagues at the Lorensberg theatre and their Max Reinhardt-inspired modernist approach to stage acting. In any case it paved the way for a new professional direction for the star who was now over 40 years old. Another break from the classical tradition of the operetta occurred when Per Lindberg offered her the role of Mrs Peachum in Bertolt Brecht’s Tolvskillingsoperan, performed at Riksteatern (the national theatre) in 1936. Naima Wifstrand subsequently became good friends with Bertolt Brecht following his flight to Sweden from Nazi-Germany in 1939. It has been said that he wrote the title-role of his play Mor Kurage och hennes barn with Naima Wifstrand in mind. However, she never got the chance to play the part.

Naima Wifstrand stayed at Riksteatern for two years, from 1939–1941. During this time her appearances included Wilhelm Moberg’s Rid i natt and as Mor Aase in Henrik Ibsen’s Peer Gynt. These two roles served as passages towards more demanding spoken stage roles. Later her acting career would achieve its peak success when she performed as Farmor in Hjalmar Bergman’s Farmor och Vår Herre, in productions at the Vasa theatre in 1960, in Malmö in 1962, and in Stockholm in 1963.

During the early 1940s Naima Wifstrand also initiated, albeit late-on, her film career. She initially played minor parts, such as the female concierge in the “youth-on-the-run” film Kungsgatan, directed by Gösta Cederlund in 1943. Throughout the 1940s she appeared in 25 films. The fact that, in 1947, she appeared in 8 films in addition to her other commitments says quite a lot about her capacity for performing given that she was nearly 60 years old. Nevertheless, her heyday as a film star was still yet to come.

From 1954–1956 Naima Wifstrand was employed at Malmö Stadsteater which coincided with the period when Ingmar Bergman was there. She had previously had smaller parts in his productions of Musik i mörker in 1948, Törst in 1949, and Kvinnors väntan in 1952. The two knew each other well. She was perhaps still seen as one of the older ‘standard women’ of Swedish film. At Malmö she worked intensively on the stage under Bergman’s direction whilst also delivering an unforgettable performance as the old Fru Armfeldt in his Sommarnattens leende in 1955, and as Trollkärringen in his 1958 Ansiktet, to just name two of her most notable performances. She appeared in yet another Bergman film, Vargtimmen. Her last film performance was Vindingevals in 1968, directed by Åke Falck, which premiered just a few weeks before her death, aged 78, that same year.

Naima Wifstrand was made a member of the royal order of the Vasa in 1955. She is buried at Norra begravningsplatsen (the Northern Cemetery) in Solna. 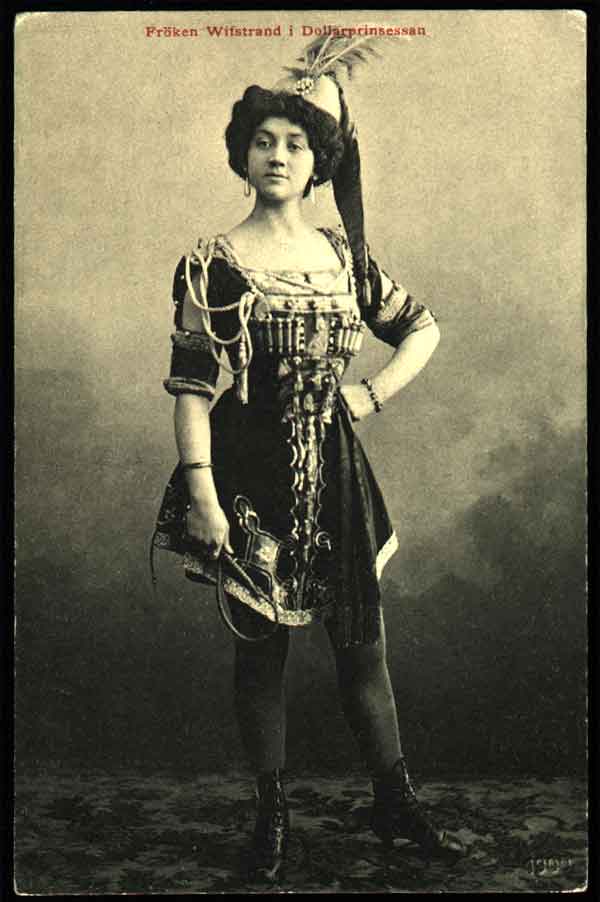