Naima Sahlbom was a chemist and a peace activist.

Naima Sahlbom was born in Stockholm in 1871. Her parents were Gustav Walfrid Sahlbom, a civil engineer, and his wife Charlotta Bernhardina. The family numbered five children.

Naima Sahlbom developed her interest in science at an early age. As a youth she worked for Stockholms vattenledningsverk (water supplies), a job which her father had arranged for her. Once she had completed her schooling as a private student at the Wallin school in Stockholm she briefly enrolled at Stockholm college where she quickly became noted for her skills in chemical analysis, particularly with regard to clays and minerals. Thanks to this work she was elected into the Geological Society in Stockholm in 1894. She began her studies at Uppsala university in the autumn term of 1894, deepening her knowledge and proficiency in chemical analysis to such a degree that geologists at the university increasingly called upon her services. After gaining her Bachelor’s degree in 1896 she worked at Kemisk-tekniska byrån in Stockholm, purely for financial reasons, before she became associated with Geologiska kommissionen (geological commission) in Helsinki in the early 1900s. She then became the first woman to be elected into Finska Kemistsamfund (Finnish society of chemists).

It proved to be difficult for Naima Sahlbom to gain employment in Sweden, however. Following her stint in Helsinki she spent some time working for Hjalmar Sjögren, the head of mineralogy at the Naturhistoriska riksmuseet (national museum of natural history) in Stockholm albeit her employment conditions remained insecure. Thanks to Sjögren, who valued her work, she was able to undertake foreign travel and spent time studying in Aachen. There, in addition to traditional chemical analysis, she also learned photographic methods for determining radioactivity. She then moved on to Basel where she studied chemistry and mineralogy. She finally, in 1910, gained her PhD at the university of Neuchâtel with her thesis entitled Kapillaranalyse kolloider Lösungen.

Upon her return to Stockholm Naima Sahlbom continued to develop methods of radioactive analysis, which became another one of her specialisms, in addition to her geological and mineralogical analyses. She opened a special laboratory in Stockholm in 1914 where she engaged in research into mineral and spring water, rocks and ores, and she undertook research on behalf of both other chemists and state authorities.

Naima Sahlbom ran her laboratory for the rest of her life, sometimes under very difficult financial conditions, yet to the general public she still remains mainly known for her actions within the women’s peace movement. She had already made contact with the women’s movements in Germany and Switzerland during her sojourns in those countries, and she had reported on the cooperative movement and the terrible conditions within domestic factories. Upon the outbreak of the First World War her social activism came increasingly to coincide with peace actions and she served as a prominent member in the Swedish delegation to the major peace conference at The Hague in 1915. She was also a member of the working committee which established the Women’s International League for Peace and Freedom (WILPF). She became particularly active within the latter’s Swedish section, Internationella Kvinnoförbundet för Fred och Frihet (IKFF). Further, she was also a member of the committee for Siberian prisoners of war, Kvinnokommittén för Spaniens barn (the women’s committee for Spanish children), hjälpkommittén för Tjeckoslovakiens barn (the aid committee for Czechoslovakian children), amongst others. In 1935 she was a signatory to Kvinnornas vapenlösa uppror mot kriget (the women’s unarmed rebellion against war).

Naima Sahlbom was above all active within the matter of what role science played in war and what she saw as the abuse of science in terms of gas warfare. She published pamphlets on the subject and, in 1929, she and the Swiss chemist Gertrud Volker, organised Civilbefolkningens skydd under krig (protection of civilians during wartime) conference in Frankfurt. One of the conference’s stated aims was the collection of material on behalf of the League of Nations in order to facilitate a ban on gas warfare. Naima Sahlbom was also active in Kommittén mot vetenskapens missbruk för krigsändamål (committee against the abuse of science in the name of military purposes).

Throughout the 1920s Naima Sahlbom was a member of the editorial board of the IKFF and Svenska freds- och skiljedomsföreningen (Swedish peace and arbitration association) journal called Nya vägar. She also served as a consultant to Föreningen för rationell hushållning (society of scientific housekeeping).

Naima Sahlbom has subsequently become best known for her work within the women’s and peace movements. Throughout her life she was also a skilled and frequently employed chemist who worked in – and at times developed – the strong Swedish tradition of chemical analysis, although this was not within the usual academic framework.

Naima Sahlbom died in Stockholm in 1957. She is buried at the Norra cemetery in Solna. 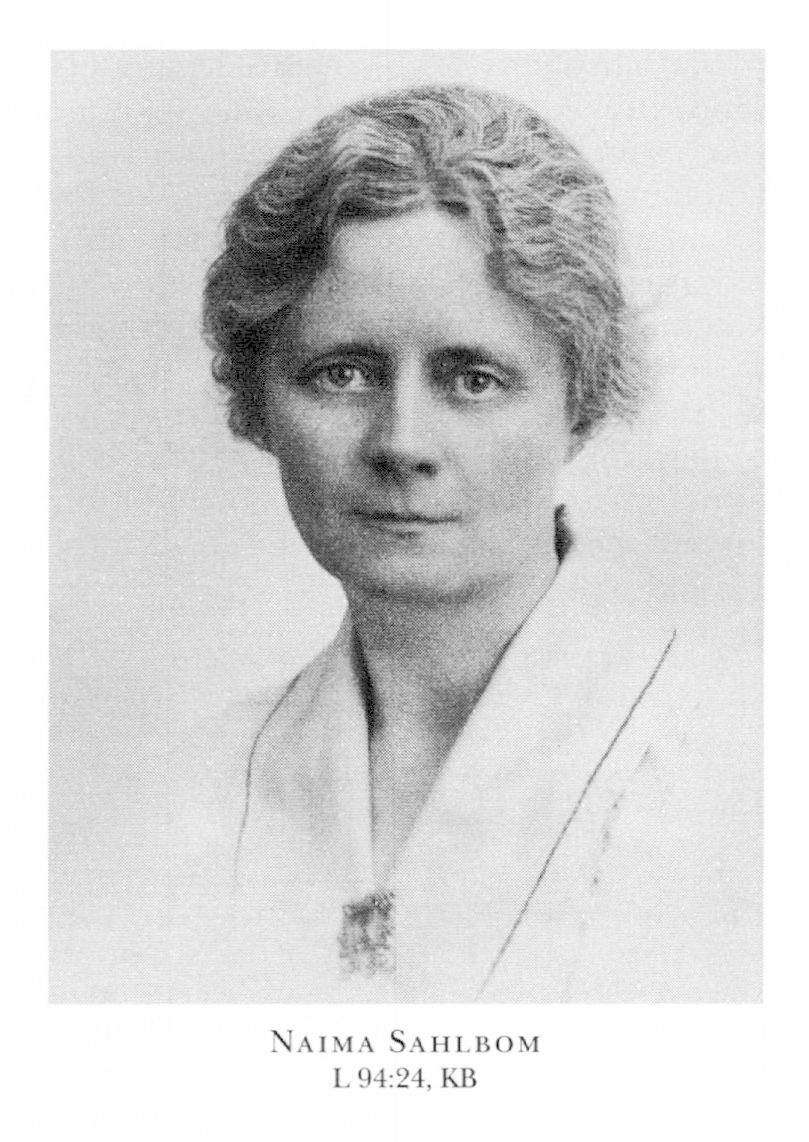