Doctor, director of a medical polyclinic

Mathilda Lundberg obtained her Bachelor’s degree of medical science in 1895, at a time when there were approximately ten female doctors. On becoming the director of the medical polyclinic at the Serafim hospital in 1917 she was the first woman to hold such a position.

Mathilda Lundberg was born in Myckle, near Skellefteå in 1865. Her parents, Gustaf and Magdalna Fredrika Lundberg, were both farmers. Mathilda was the eldest of five siblings. She had two brothers and two sisters. One of her brothers, Lars Lundberg, became an eye-doctor in Stockholm, whilst one of her sisters, Anna Lovisa Lundberg, became a director of physical education.

Mathilda Lundberg gained her school-leaving certificate from the Wallin school in Stockholm in May 1889. In the autumn of 1890 she enrolled at Uppsala university and in December 1891 she graduated from the same institution. Shortly thereafter she became registered at Karolinska Institutet (KI) where she combined practical medical practise with theory studies, and this led to her Bachelor in Medical Science in 1895. She finally gained her medical licentiate in 1901 and then became a qualified medical doctor.

Mathilda Lundberg began her medical career as a junior doctor at Stockholms sjukhem (nursing home), where she worked from 1902–1903. She subsequently worked at various clinics at the Serafim hospital in Stockholm. Sometimes an assistant position became available if the professor was favourably inclined towards female doctors. Mathilda Lundberg was fortunate enough to work with such a professor. However, she had to go abroad for her specialist training and thus her interest in heart and lung diseases took her to sanatoria in Germany and Switzerland. During the summer of 1906 she also worked as a volunteer doctor at Dr Turban’s Sanatorium in Davos.

Upon returning to Stockholm Mathilda Lundberg opened a private surgery there, in the autumn of 1906, specialising in heart and lung diseases. She and two colleagues undertook research into how widespread tuberculosis was amongst public school children in Stockholm. One of the provisions which Mathilda Lundberg believed would contribute to a reduction in the spread of tuberculosis was the practising of physical exercise and in 1909 her lecture entitled “Gymnastikens användbarhet i striden mot lungtuberkulos” was published.

During 1910–1911 Mathilda Lundberg spent time serving as an expert when the 1902 committee for salary regulations considered the eligibility of women for certain national posts. She was, however, very critical of the final proposals put forward by the committee, which she also shared with certain provisos. Further, she was deputy chair of the pension authority for the third district, whilst also a member of the board of both Sabbatsberg and Rosenlund homes for the elderly.

From 1913–1917 Mathilda Lundberg served from time to time as chief physician at Romanäs sanatorium in Säby, near Tranås. Her patients included the author Harriet Löwenhjelm. In 1917 Mathilda Lundberg became director of the Serafim hospital medical polyclinic. She thus became the first woman to be employed within an internal medicine teaching clinic. Nanna Svartz was a junior doctor who worked at the clinic. According to Gunnel Hedvall’s article on Mathilda Lundberg in Svenskt biografiskt lexikon Nanna Svartz described Mathilda Lundberg as “extremely knowledgeable in internal medicine. She had a distinct talent for clearly summarising a case and leading fruitful discussions with young doctors. She was sometimes strict but was always straight-forward and fair, a ‘true philanthropist’”.

Mathilda Lundberg died in 1959. She is buried at the Norra cemetery in Solna. 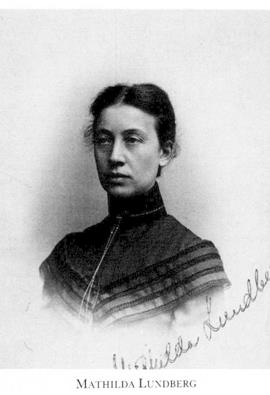