Märta Wikström was one of Sweden’s earliest female legal practitioners. She was a lawyer who ran her own legal agency.

Märta Wikström was born in Söderhamn in 1887. She and her two siblings were raised in that town by their parents, Gustaf Wikström and Hilda Kristina Wikström, née Lundell. Märta Wikström developed an interest in law at an early point, having already decided to become a lawyer whilst still a pupil at a girls’ school. Given that Märta Wikström did not personally know a single legal practitioner and that no-one else in her family had entered academia this was somewhat unusual.

Märta Wikström had to wait a few years before she could begin her higher studies. Like her sister Greta, she spent several years working as a telegraph operator. Her job sent her across Sweden, taking up various positions until 1915 when she gained employment in Stockholm. This enabled her to pick up her studies again. Whilst working Märta Wikström also matriculated as a private student at Norrmalms Högre latinläroverk (now known as Norra Latin) in Stockholm. Märta Wikström began her legal studies at Stockholm college (now Stockholm university) in the autumn of 1919. Combining fulltime work with legal studies proved too challenging and so Märta Wikström resigned from her telegraph job. Instead, she took on part-time jobs such as being a child welfare officer for Stockholm city, a relief worker for government agencies, and a private teacher, which allowed her to continue her studies. Märta Wikström finally gained her Bachelor of Laws degree at the age of 38 in 1925. She then spent some time working as an associate notary at Stockholm magistrates’ court and at the Svea court of appeal.

Märta Wikström got her first legal practitioner’s job in 1929 when she became an assistant legal practitioner at the lawyer Eva Andén’s legal agency. Following a two-year stint at that agency Märta Wikström opened her own legal offices in 1931 which she then ran until she retired. As was the case with many of the other early female lawyers Märta Wikström mainly dealt with issues pertaining to family law. She enjoyed the multifaceted, interesting, and rewarding profession of lawyer but, as she revealed in an interview with the Aftonbladet newspaper in 1937, sometimes she missed “the steady albeit repetitive work of a civil service job [as telegraph operator] with regular work hours, holidays, and pension provision”.

Initially female lawyers were few and far between in Sweden. There was no official association or club, and these female professions formed informal networks instead and joined the Swedish Bar Association, of which Märta Wikström became a member in 1932. In addition, they also frequently worked for each other. During the 1920s and 1930s several of the newly-graduated female legal practitioners got their first jobs at Eva Andén’s agency, just as Märta Wikström had.

Märta Wikström applied her legal enterprise to improving women’s legal standing in society. She was involved in women’s rights, particularly in regard to matters involving marriage and personal finances. She was also extensively interested in social welfare. Märta Wikström wrote a series of articles for the Svenska Dagbladet newspaper which highlighted, in various ways, the legal standing of women in Sweden. She regularly published polemical contributions in the daily press and in journals on various contentious legal points. Following the 1923 introduction of ‘behörighetslagen’ which formalised regulations for women’s access to civil service jobs, she for example wrote an article for the Hertha journal on the unfair conditions women endured vis-à-vis men as telegraph operators. Men were given longer and more comprehensive training than their female counterparts, enabling them to earn higher salaries and take on more challenging jobs and therefore enjoy better promotion opportunities. Despite changes in the law, sexual parity within that and many other civil service professions was far from being achieved. Märta Wikström also engaged with the issues arising from domestic worker’s work environment and their training.

Märta Wikström also served as a legal expert on state inquiries. She was a member of the 1934 ‘barnpensionering’ experts’ panel which, in 1936, put forward proposals on advancing children’s maintenance payments, including those born outside of marriage. Märta Wikström was also heavily politically active and stood as a parliamentary candidate for the Right Wing party.

Märta Wikström spent her spare time involved in a wide variety of associations, often taking the role of secretary within the organisation. She was an active member of several associations which worked on behalf of women’s interests in a range of contexts.

Märta Wikström died in 1976, aged 89. She is buried at Söderhamn cemetery in a family grave which also holds her parents and siblings. 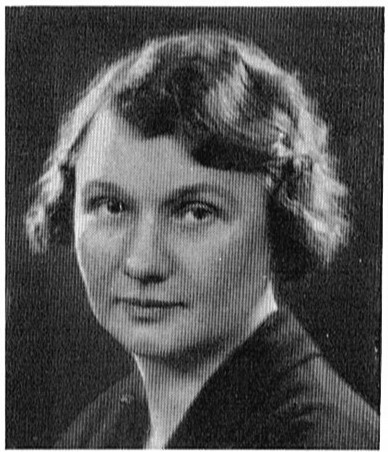