Marie Sophie Schwartz was one of the most popular novelists of the late nineteenth century both in Sweden and beyond. She also wrote polemical articles and reports for newspapers such as Aftonbladet and Svenska Tidningen.

Marie Sophie Schwartz’s life is even more mysterious than that of her fictional characters. She herself claimed to be the daughter of the German merchant Carl Birath and Albertina Björk, and that she was born a few months after her father’s death. In reality she was the daughter of the maid Carolina Birath and her father was unknown to her. In July 1918, just before she was born, her mother had been sent to Borås and Marie Sophie Schwartz (then Birath) was adopted by chief customs inspector Johan Trotzig and his wife Gustava Björk in Stockholm.

Marie Sophie Schwartz attended a girls’ school and later received private lessons in drawing and painting. When she was twenty years old she started working as a housekeeper for professor and chief director Gustaf Magnus Schwartz. He was also known for being an inventor and phrenologist, and as the founder of Teknologiska institutet, which later became Kungliga Tekniska Högskolan (the Royal Institute of Technology) in Stockholm. She had two sons with Schwartz and they lived together as a family but they never formally married. This was due to the fact that he was a Catholic and thus could not divorce his second wife, the French woman Caroline Schwartz, who had left him with their daughters. In 1844, shortly after Marie Sophie Schwartz’s and Gustaf Magnus’ first son was born the author Carl Fredrik Ridderstad published a key novel and lampoon of Gustaf Magnus Schwartz entitled Frenologen. In this account the main character Mörck, who represented Gustaf Magnus, had murdered his wife and committed incest with his daughter whilst spending his nights robbing graves in order to obtain skulls for his studies. The consequences of Ridderstad’s novel, combined with difficulties at Teknologiska institutet, resulted in Gustaf Magnus Schwartz’s resignation. The couple then went to live elsewhere for a time before they eventually could return to their lives in Stockholm. After Gustaf Magnus Schwartz’s death in 1858 Marie Sophie Schwartz became an established author. She was a socially engaged and literary figure of the cultural scene in Stockholm until her death.

Her life with Gustaf Magnus Schwartz had probably entailed continued education for Marie Sophie Schwartz and in 1851 he had allowed her to anonymously publish a story called “Förtalet”. The next year she released the novel De värnlösa and the year after that she published many fictional stories as well as factual articles and reports. With the help of her friend Emilie Krook she published her work using various pseudonyms, all presumably behind Gustaf Magnus Schwartz’s back. She published several articles and stories in Johan August Hazelius’ Svenska tidningen, including the novel Emancipationsvurmen, 1856, which was a response to Fredrika Bremer’s Hertha. As part of the Hertha-debate on women’s emancipation she wrote four short stories on “Qvinnan såsom näringsidkare” which were all published in Illustrerad Tidning in 1857. Using four convincing examples of affluent women within various trades she advocated that the trade laws be changed and for women’s rights to training and freedom of trade, that is that women should have the right to practise a trade and thereby provide for themselves.

After Gustaf Magnus Schwartz’s death Marie Sophie Schwartz was forced to provide for her family through her writing, and this pushed her to increase her output. She frequently published using her own name, releasing several novels a year, including some of her most well-known works such as Mannen af börd, qvinnan af folket, 1858, Arbetet adlar mannen, 1859, Börd och bildning, 1861, and Positivspelarens son, 1863. The majority of her novels were quickly translated into Danish and later, at her suggestion, into German, and subsequently into other languages. She became one of the most translated Swedish authors of the second half of the nineteenth century, along with Emilie Flygare-Carlén and Fredrika Bremer. Her novels became particularly popular in eastern central Europe, in what was then Bohemia, Poland and Hungary. Several of her novels were also published in English in the USA.

Marie Sophie Schwartz was active in many of the social issues of her time, particularly the women’s movement. She advocated better education and increased freedom of trade for women in Till Sveriges mödrar, 1857, and in Några ord till qvinnan, 1863, as well as in polemical articles like “Om qvinnans ställning”, 1857 and “Om opinionens tyranni mot qvinnan”, 1860. She also published several biographical pieces on other authors, like En Episode af Lidners ungdom, 1868, and Några runor: episoder ur Herman Bjurstens, Fredrika Bremers, Lars Hjortsbergs … och Esaias Tegnérs hvardagslif, 1869. In addition, she also penned a few autobiographical works such as Mina Lefnadsöden. Berättelse, 1870.

Marie Sophie Schwartz’s fiction also testified to her political activism. Several of her novels are socially relevant polemical novels which formed part of the ongoing social discussion. She also used them to advocate increased equality between the sexes and women’s rights to education and ability to work. Her novels contain many examples of competent and exemplary women, on a par with any man, such as Stephania in Mannen af börd och qvinnan af folket. In De värnlösa, 1852, she depicts child prostitution and in En Polens dotter, 1863, she is supportive of Poland’s struggle for independence and demand for self-governance from Russia. She continually returns to the relationship between class and gender, and the impact that work has on an individual’s self-esteem and social standing. Positivspelarens son tells the story of a man who gains social standing and esteem by working hard, a theme also apparent in her other well-known works, Arbetet adlar mannen and Arbetets barn. With her clear political engagement and ability to unite fictional literary writing with political journalism, Marie Sophie Schwartz anticipated the type of writing and author’s stance which came to characterise modernism’s breakthrough in Swedish literature.

Marie Sophie Schwartz died in Stockholm in 1894 and is buried at Norra cemetery in Solna. 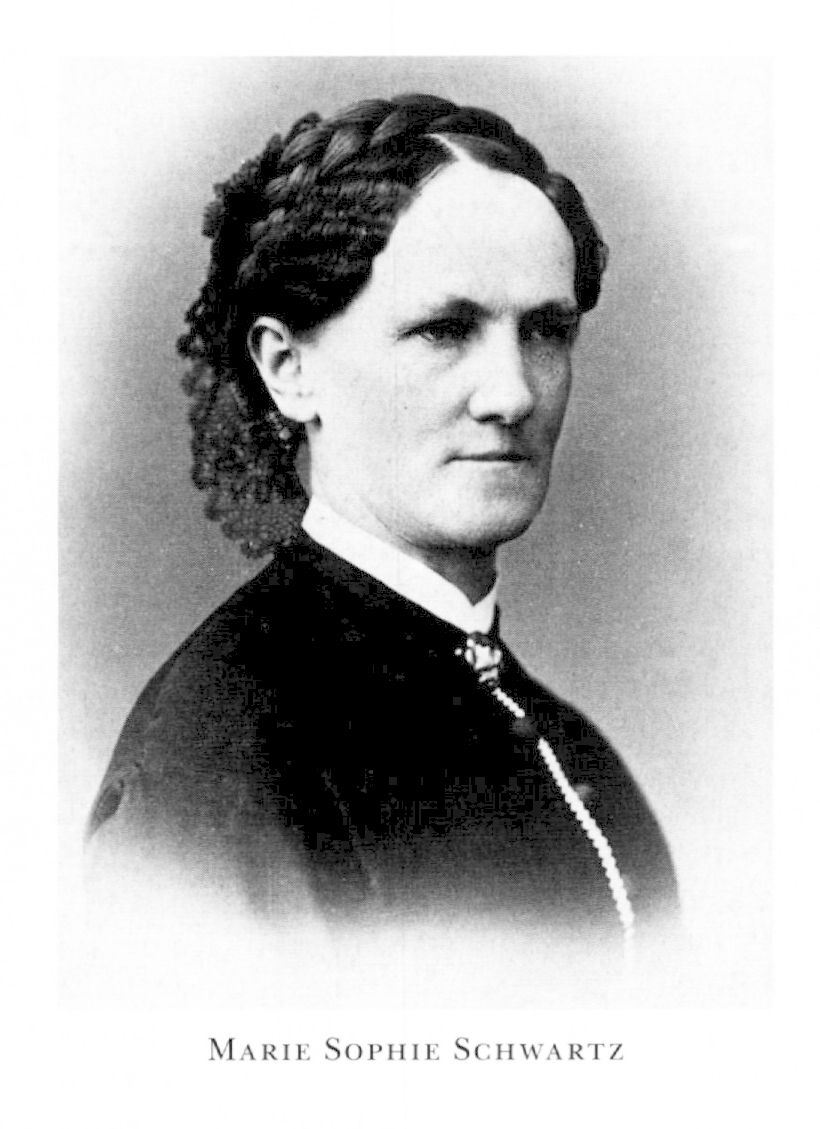