Marie-Louise de Vylder-Lehmann was a lecturer and journalist. She was active in refugee aid during the 1930s and 1940s.

Marie-Louise de Vylder-Lehmann’s parents were both much engaged in human rights issues, which influenced the children a great deal, particularly Marie-Louise de Vylder-Lehmann. Their mother believed however that the home was a woman’s special place of work. All the children were taught at home by their parents when they reached school age, and the two eldest daughters did not receive any further education. The third daughter, Estrid de Vylder, followed in her father’s footsteps when it came to studies in Lund. She was admitted to the philosophical faculty at Lund University in October 1924, the same year that she matriculated. Two years later, in 1926, Marie-Louise de Vylder-Lehmann also moved to Lund, when she married the Danish-Swedish physician and chemist Jørgen Erik Lehmann. The couple had two sons, Orla and Klas-Erik, and while Marie-Louise de Vylder-Lehmann mostly devoted herself to caring for their home, Jørgen Lehmann focused on his career. In 1935, he moved to Cornell Medical School at Rockefeller University in New York to complement his medical studies even further. Marie-Louise de Vylder-Lehmann remained in Lund with their two sons. She taught schoolchildren in their home and was also engaged in the Women’s International League for Peace and Freedom (WILPF). Towards the end of the 1930s, she was appointed chairwoman of the southern Swedish district branch and thus participated in the reception of the first Jewish refugees to arrive in Sweden, fleeing from the dangers of the German-speaking countries. She was also active as a journalist and lecturer, focusing on U.N. issues.

In 1937, Jørgen Lehmann was appointed as professor in medical biochemistry at Aarhus University in Denmark and the whole family moved there. Their stay in Aarhus did not last long however, since Jørgen Lehmann was appointed as a consultant and head of the central laboratory at the Sahlgrenska Hospital in Gothenburg only the year after. The family settled in Viktoriagatan in Gothenburg.

Marie-Louise de Vylder-Lehmann continued to engage herself in the refugee issue. The Swedish state remained for a long time reserved when it came to receiving refugees, but after Kristallnacht the problem appeared more acute, and in December 1938, Sweden decided to accept a quota of 200 Jewish children and young people. Marie-Louise de Vylder-Lehmann was then the chairwoman of the Gothenburg branch of the WILPF and she played a leading role in the formation of the Gothenburg aid committee for refugees fleeing their home country that was established to receive and help the children.

Marie-Louise de Vylder-Lehmann was responsible for finding places for the children and since the number of volunteer foster families was very small to start with, she advertised in the local daily newspaper Göteborgs Handels- och Sjöfarts-Tidning (GHT). She recorded the families and their wishes regarding children, and had contact with the children’s parents in Berlin and Vienna to organise their journey to Sweden. She welcomed the children at the railway station in Gothenburg, saw that they were collected by their foster families or organised transport, and kept in contact via letters with the children in foster homes, their foster parents and their biological parents. Since the number of willing foster families was not sufficient, a children’s home for girls was opened in a house in Viktoriagatan. Marie-Louise de Vylder-Lehmann sat on the board for this “Flickhemmet” and supervised the younger children’s schooling. She saw to it that the older children could learn a profession and wrote a large number of articles about the child refugees in various newspapers and magazines. Altogether about 100 Jewish children came to Gothenburg during this period, of whom some were unable to return home later since their parents and relatives had died during the war.

The couple’s difference in interests was wearing for family life. Jørgen Lehmann spent long days in the laboratory at the Sahlgrenska Hospital while Marie-Louise de Vylder-Lehmann devoted herself to her humanitarian work. The couple separated in 1947, and Jørgen Lehmann remarried a year later.

In November 1958, Marie-Louise de Vylder-Lehmann became active in the work of providing aid for the homeless in Gothenburg, which led to the establishment of the Fyrbåks-Expressen, Sweden’s first railway carriage home for the homeless. The project had started with a conversation between Marie-Louise de Vylder-Lehmann and Arne Nilsson, a stone-setter in Gothenburg, also known as “Sten-Jesus” (Stone Jesus). Arne Nilsson had been helping the homeless in Gothenburg for many years, after himself having become an evangelist and raised himself out of alcohol abuse. The two of them started wandering around between authorities and shops in Gothenburg asking for help, and they received generous contributions from several directions. The national railway company SJ donated three carriages, of which two were sleeping cars with a total of 67 beds and one was a restaurant car. The harbour board organised a place for them to be parked in the Fishing Port in Gothenburg. The electrical company provided them with electricity. The railway carriage home was given a solemn inauguration on Sunday 15 February 1959, and it remained in place until 1965, when the carriages were transported away to make way for the new roadway Oscarsleden.

Marie-Louise de Vylder-Lehmann has been credited with the honour of contributing to the conservation of Queen Kristina’s hunting lodge, a half-timbered cottage dating from the 1700s on the hill Otterhällan in Gothenburg. In March 1971, the campaign to save the lodge was initiated since it was threatened by immediate demolition in connection with new construction in the area. Marie-Louise de Vylder-Lehmann, who was the chairperson of the Liberal Party’s centre group in Gothenburg, participated in the formation of a committee to save the lodge. The committee collected funds to save the building and were given permission by the Gothenburg real estate office to move it to a new plot that was made available, on the other side of Otterhällan hill. To administer the move, the association Kulturminnesföreningen Otterhällan, was formed, which today owns and looks after the lodge. Marie-Louise de Vylder-Lehmann was the chairperson for this association in 1973–1979.

For her work of conserving Queen Kristina’s hunting lodge, Marie-Louise de Vylder-Lehmann was honoured in 1974 with the Order of Vasa, and on her 87th birthday she was awarded a mark of distinction by the Riksförbundet för Hembygdsvård.

Marie-Louise de Vylder-Lehmann died in 1986. She is buried in Kviberg Cemetery in Gothenburg. 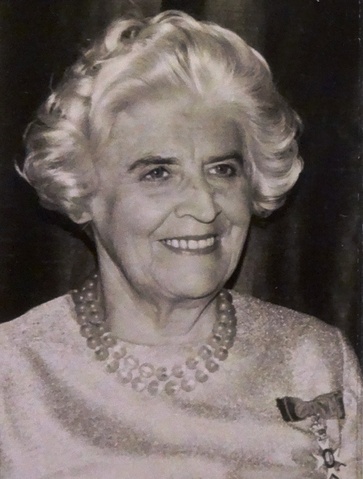