Maria Widebeck was a textile artist and designer who dedicated her life to her art.

Maria Cecilia Widebeck was born in Strängnäs in 1858. Her parents were Samuel Widebeck, who was the dean of Strängnäs, and his wife Carolina Ulrika, née Ekmarck. They had a large family with nine children. At the age of 22 Maria Widebeck began attending Högre konstindustriella skolan (HKS, now known as Konstfack, school of arts, crafts and design) in Stockholm, where she was a student from 1880–1885. One of her fellow students was Carin Wästberg and the two of them set up a company called Widebeck and Wästberg together as students. They worked together for the rest of their lives and all their work bore the signature W.W.. Maria Widebeck and Carin Wästberg were more than work colleagues and remained close friends who also lived together until Maria Widebeck passed away in 1929.

Once she had completed her schooling Maria Widebeck undertook several study trips abroad. From 1887 onwards she was employed as a pattern-designer for Handarbetets Vänner in Stockholm. At this time Handarbetets Vänner was employing several young pattern-designers from HKS. In 1891 Maria Widebeck received a travel stipend to go to Great Britain, where she spent three months in London and Oxford, accompanied by Carin Wästberg. Their main interest lay in William Morris and his circle and these two women subsequently became some of the earliest Swedish promoters of Morris and his views on art and handicrafts.

From 1905 onwards Maria Widebeck took on the role of director of the Handarbetets Vänner museum and archives. In 1915 her responsibilities expanded to include the association’s conservation unit. Maria Widebeck not only designed textiles but she also worked in glass, silver, and with furniture. She was also a skilled drawer as evidenced by several surviving sketchbooks. Her biggest project in terms of drawing was the nearly 4,000 illustrations she supplied for Carl Arvid Klingspor’s major work Sveriges ridderskaps och adels vapenbok, published in 1890.

Maria Widebeck was a very modest and reserved person, according to Carin Wästberg. Work was very important to her and she was extremely conscientious. Throughout their lives the two women co-signed their works, even if one or the other had been responsible for most of the sketches involved. Maria Widebeck and Carin Wästberg were involved in several major exhibitions, including the 1897 Almänna konst- och industri exhibition in Stockholm, the Nordiska museet exhibition in 1902, the 1914 Baltic Exhibition held in Malmö, and the Jubilee exhibition in Gothenburg in 1923.

Following a number of years of ill health Maria Widebeck died in 1929. She is buried at Gamla kyrkogården (the old cemetery) in Strängnäs. 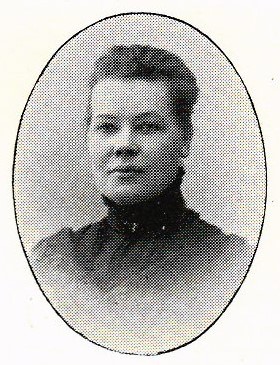