Maria Stenkula made significant contributions to improving girls’ educational opportunities in Malmö by founding a girls’ school there in 1870. She was both the school’s governor and a teacher there for 30 years.

Maria Stenkula was born in 1842. She was the daughter of the army surgeon and medical doctor Zacharias Fredrik Agathon Stenkula and Hedvig Margareta, who lived in Helsingborg. She was the second child of 13 siblings. The family’s wealth not only enabled all the children to gain good education but also started them on successful career paths.

Maria Stenkula spent her earliest years at Farhult vicarage near Helsingborg where her uncle was a vicar. When she was six years old she was enrolled at a public school in Helsingborg where her aunt Margareta Åkerman was her teacher. The school environment and the learning process left a deep impact on Maria Stenkula and she quickly found that teaching was her calling. There were other teachers in her family, on both her maternal and paternal sides.

In 1866 Maria Stenkula applied to enter the Högre lärarinneseminariet (the advanced teacher training programme) in Stockholm, which at the time was one of few places of advanced training for women in Sweden. She did not pass the entrance exam, however, and so she was instead placed at the state-run girls’ school Statens normalskola för flickor, which served as the Högre lärarinneseminariet’s preparatory school. After spending a year at the state-run school she was admitted to the advanced programme, from which she graduated in 1870, having completed three years’ studies. She returned to Scania together with a fellow student, Elin Lunnerquist. The two established a girls’ school in Malmö on Södergatan. It was quite usual for teachers who had graduated from Högre lärarinneseminariet to found their own schools, leading to somewhat of an explosion of girls’ schools during the late nineteenth century. Elin Lunnerquist got married in 1878 and this left Maria Stenkula solely responsible as the governor of their school.

There is scant information on the early activities of the school but it is clear that Maria Stenkula’s girls’ school achieved an influential position among the schools of Malmö reasonably quickly. In 1884 the school changed its name to Malmö högre läroverk för flickor (advanced school for girls), moved to new premises, and was turned into a limited company. During the first academic year following these changes there were 208 pupils enrolled at the school, which comprised a three-year preparatory school and an elementary school with four two-year classes. There were 15 female and four male teachers at the school. Maria Stenkula herself taught catechism, church history and German. The school’s emphasis lay in the humanities but it also focused on physical and practical teaching through daily gymnastics and teaching household economics. Maria Stenkula stayed on as the school governess after 1884 but reduced her responsibilities with regard to leading the school. Her brother, the secondary school teacher and public school inspector Adolf Oscar Stenkula, was on the school board and part of the limited company.

Teachers’ wages at girls’ schools were generally quite low, and this was also true of Maria Stenkula’s girls’ school and Malmö högre läroverk för flickor. Similarly, the governors’ wages were not significantly different from the teachers’ wages. The issue of wages and pensions, combined with Maria Stenkula’s reduced influence in the direction her school was taking, resulted in her resignation from her own school in 1900. She moved to Örkelljunga, where she immediately began a new enterprise running a private school for the wealthy children of the area. This educational business was of a significantly smaller scale than her previous school and comprised approximately 11 pupils. Maria Stenkula ran her private school until she turned 75 in 1917. She became known in Örkelljunga for her demanding and disciplined teaching style, but she was also popular with her students.

Maria Stenkula was deeply religious and a firm supporter of the Swedish Mission church. She stayed close to her family throughout her life, and several of her family members were engaged in her teaching enterprises in one way or another. She remained faithful to her calling as a teacher from the age of 24 to 75. She never married.

Maria Stenkula died in 1932 and is buried at the old cemetery in Örkelljunga. 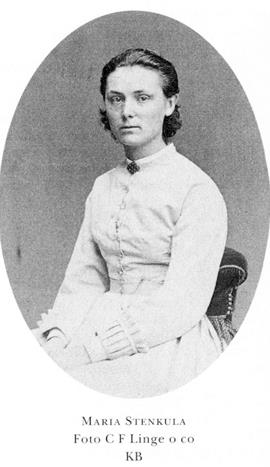