Maria Sofia De la Gardie was a member of the aristocracy who managed property and ran a company.

Maria Sofia De la Gardie was born in 1627. She was Ebba Brahe’s and Jakob De la Gardie’s seventh child. In total her parents had 14 children together, of which only nine survived past infancy. Maria Sofia De la Gardie was not particularly well-educated. By the time she was 16 she was already married to Gustav Gabrielsson Oxenstierna. They married in Stockholm in the winter of 1643 and the wedding celebrations lasted for several days. Maria Sofia De la Gardie’s morning gift from her husband, which was formalised at the wedding, was the property of Tyresö farm. As Gustav Oxenstierna had been appointed governor of Estonia the newlyweds travelled to Reval shortly after the wedding and settled at the castle there. They soon had a daughter, who died in infancy, followed by another two daughters – the youngest of which was born the same year that Gustav Oxenstierna died. Maria Sofia De la Gardie’s five-year marriage was then followed by widowhood, a social status which she retained for the rest of her life, despite the attentions of various suitors including the Duke of Croye.

After her husband’s death Maria Sofia De la Gardie was awarded a pension by Queen Kristina, whilst her daughters’ financial position was guaranteed through a separate donation from the queen. Maria Sofia De la Gardie held court appointments, as a court stewardess and as high court stewardess, posts which entailed financial maintenance. When her husband was posthumously appointed Count of Croneborg she too became a countess and thus became included in the courtly disputes.

Maria Sofia De la Gardie was involved in a range of varied economic activities. In addition to agricultural enterprises she also, from the 1660s onwards, engaged in mining works and a copper works on the Vättinge River. Further, she ran a glove-making business, a paper mill, a firearms factory, as well as an oil works, whilst also being responsible for maintaining the lighthouses at Kullen and Falsterbo and at Nidingen in Halland. She also invested in trade and shipbuilding companies. In addition she lent money, particularly on behalf of her siblings and her mother. At Tyresö she began a business making clothes. Maria Sofia De la Gardie also tried to set up a porcelain factory, which would have been the first in Sweden had it been successful. However, the plans came to nought.

Maria Sofia De la Gardie’s wide-ranging activities were typical of her contemporaries who had similar financial resources. Despite her diligence and business acumen the enterprises were not always profitable, and according to her this was partly due to the failure of secondary parties to fulfil their obligations. Her disputes with Governor General Aschenberg and Bengt Horn, Governor of Estonia, incurred enormous losses for Maria Sofia De la Gardie. She also took her siblings and other family members to court when they did not repay their debts. She engaged in a particularly lengthy case against her brother-in-law Christoffer Gyllenstierna. He had accused her of mismanaging her daughters’ inheritance, an accusation which Maria Sofia De la Gardie vehemently denied.

Eventually the sheer number of court cases led to financial difficulties for Maria Sofia De la Gardie, as did the ongoing wars which Sweden engaged in. The Scanian wars made it difficult, for example, to retain workforces in the mines – as those who were fit for work were required for military service – and the Crown was not able to fulfil its financial obligations to her. In addition to this, Maria Sofia De la Gardie’s properties and farms that lay in the war zone were subject to destruction.

Maria Sofia De la Gardie was critical of the demands placed on the nobility that they should return their properties to the Crown through what became known as “reduktionen”. She believed that it would be an unchristian act to relieve “a poor widow, whose only income has been her own small property” of that same property. Despite her opposition, some of her holdings in Scania and in the Baltic provinces were forcibly returned to the Crown.

Maria Sofia De la Gardie’s trademark was her business acumen combined with ongoing legal cases. She died after a period of illness in August 1694. Her funeral was held at Riddarholm church in Stockholm but she was buried in a tomb that she herself had set up at Tyresö church. In a move so typical of Maria Sofia De la Gardie’s life the fees for her funeral and burial led to a court case between the surviving relatives, and it was only resolved in April 1730. 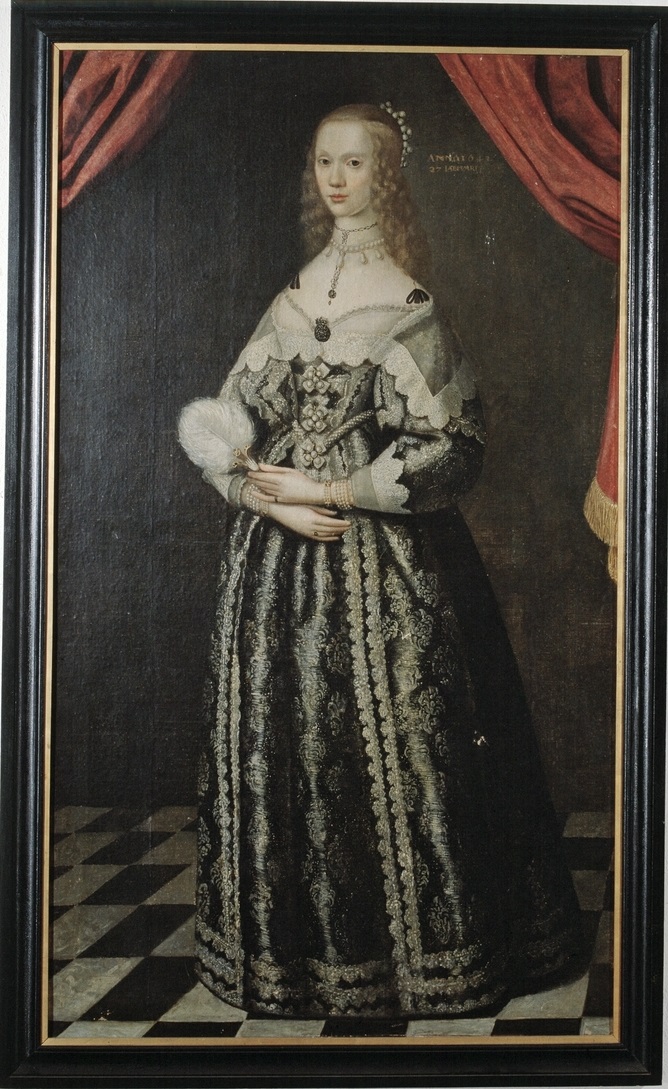