Maria Röhl was an artist who produced portraits of members of Swedish society and the cultural elite during the 1800s.

Maria Röhl was born in 1801. She grew up at Skönstavik near Stockholm. She was the second child in a family of five sisters. Her father, Jakob Elias Röhl, had served as consul in the Swedish colony of St Barthélemy where, as rumour had it, he had become wealthy through the slave trade. Maria Röhl was given an education appropriate to her social standing. This included drawing, which was taught in the family home by the architect and portrait artist Alexander Hambré.

Following the death of her father in 1822 Maria Röhl went to live with relatives in Värmland. In 1823 she arrived in Stockholm seeking employment as a governess. She obtained a post in the home of Christian Forssell, the engraver to the royal court. Upon noticing her artistic talent he felt she should make use of it. On Christmas Eve 1823 he invited Maria Röhl via an ‘anonymous’ letter to stay on as his student. She accepted this invitation with great delight and thereby gained not only an influential teacher and mentor but also a new home and new family through Forssell’s wife and four children, who included her in their everyday lives as well as in their social lives.

Maria Röhl’s training with Christian Forssell – who was also a professor at Konstakademien (the Royal Swedish Academy of Fine Arts) – involved not just drawing and making models, but also making copies of famous artistic originals. Maria Röhl tested out her stippling and copper plating skills but quickly found greater success with Conté crayons and pencil work. Her talent for being able to quickly capture a person’s likeness in portraits came to the fore and the social scene of the Stockholm bourgeoisie provided her with a large pool of potential clients.

Christian Forssell used his experience and network of contacts to help Maria Röhl become an established portrait artist. Her account book notes her first commission in 1827. That same year she was given the prestigious commission to make a portrait of the princess Sofia Albertina. This royal recognition of her talent subsequently opened many doors for her. Three years later she opened her own studio on Kungsholmen.

Maria Röhl was well-known for her good sense of humour and for her social skills. These were abilities which helped her to gain customers whom she often befriended for life. Her reputation extended beyond Stockholm and soon she was travelling around the countryside producing portraits at various estates and in towns like Linköping, Västerås, and Gothenburg. Many of those within the wealthier social classes could afford to have portraits made of their whole family for an agreed price. They thereby gained an item displaying their social status by keeping up with the trend and by being part of the ‘right’ circles.

Maria Röhl’s portraits of several of the cultural celebrities of her day contributed to the fame she enjoyed during her lifetime and ensured her place within cultural history. Some of these portraits included the likes of Fredrika Bremer, Erik Gustaf Geijer, Wendela Hebbe, Malla Silfverstolpe, and Esaias Tegnér, to name just a few. The latter referred to Maria Röhl as “konstmön” (the lady artist) and, in 1827, he penned a poem called “Konstens genius” in her honour.

Maria Röhl was a professional and successful career woman at a time when gender roles were heavily segregated. She had secretly become engaged when Christian Forssell issued his invitation to become his student, and she once again became engaged in her 30s. However, she never did marry. As a single woman she not only provided an income for herself but sometimes also provided for the Forssell family when they fell upon hard times in the late 1820s.

The popularity of Maria Röhl’s portraits reached peak level during the 1840s. Her success was confirmed in 1843 as that year she was awarded the title of painter to the royal court and she was also elected into Konstakademien, where she had been ‘agrée’ (recognised) since 1827. Having ascertained her success in Sweden she turned her eyes toward Europe. She undertook her first sojourn abroad in 1849 and travelled to Paris, where she stayed for the whole summer learning to paint in oils at Jean-François Brémond’s studio. Her next foreign trip was to Great Britain, in 1851, where she mainly spent time in London and Liverpool.

Christian Forssell died in the autumn of 1852 following a brief illness. His household then broke up. In the spring of 1853 Maria Röhl returned to Paris, becoming a student once again albeit now aged 52. She remained in the French capital for three years. She spent much of that time in Léon Cogniet’s studio and at the Louvre, where she made copies of a large number of works in pastels. She attempted to transfer her newly-discovered skills to her portraiture but was never able to achieve the same success with pastels that she had found with Conté crayons. Her attempts at working in oils were not well-received by the public or by art critics.

When Maria Röhl returned to Stockholm in the summer of 1856 she settled at the Brunkeberg hotel. Several of her fellow artists lived there and ran their studios there. As the new art of photography began to emerge in the early 1860s commissions for portraits decreased in number. Maria Röhl was still able to live comfortably off the income of her previous success. During the 1870s she added to her earnings by other means, such as producing copies of other artists’ works, painting screens, and renovating paintings.

Maria Röhl worked right up to the end of her life. When she died in 1875 she left a collection of 1 779 pencil drawings, which were the sketches for the portraits she produced in Conté crayons and then sold to her clients. Kungliga biblioteket (the royal library) purchased the collection a few months after her death. All of her portraits are accessible on the library database called LIBRIS. Her drawings are still highly sought-after and still relevant nearly 150 years after her death.

Maria Röhl’s artistic output allows current researchers to study not just the history of art and individual life stories, but also sociology, ethnology, and the history of clothing. With her sharp eye for detail Maria Röhl was able to depict clothes and hairstyles with great attention. Her collection has rightly been called a panoramic overview of the development of fashion from the 1830s to the 1860s, and as such serves as a goldmine for those interested in the history of fashion. 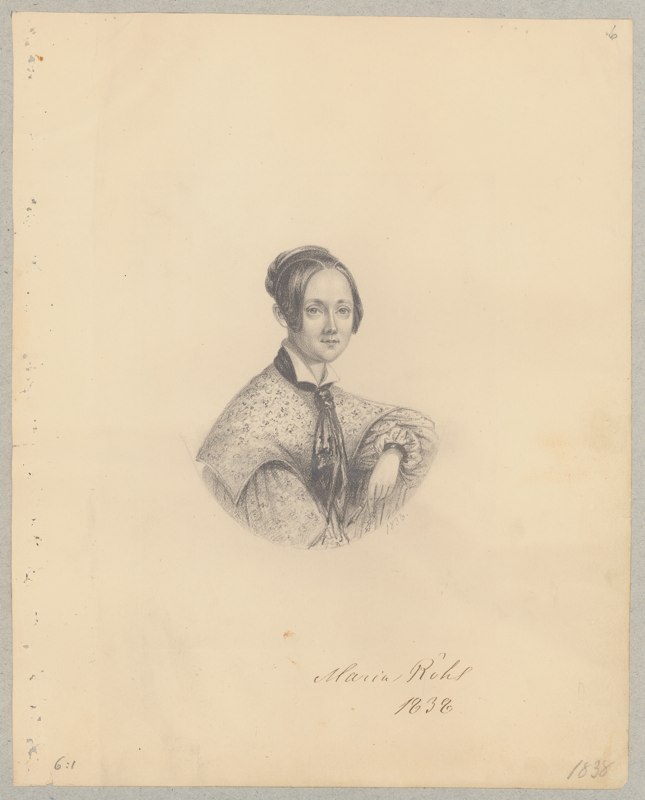