Maria Ribbing was an eminent pedagogue and Christian cultural personality. She was a great philanthropist and well known as the person who took the initiative to start the first home for the elderly in Sweden, the Ribbingska sjukhemmet in Lund.

Maria Ribbing was born in Stockholm in 1842. Her mother, Maria Christina Ribbing, was considered to be “a particularly intelligent woman”, who as early as the age of twelve taught soldiers how to count in her hometown Norrköping. Maria Christina Ribbing ran a girls’ boarding house and a lending library in her home. Maria Ribbing’s father was a Belgian musician and language teacher who died young. She had two brothers, Louis and Gustaf. She often had reason to show them “that a girl is as good as a boy”. She is described as having “an excellently clear head and a burning curiosity as well as a wonderfully kind heart”. There was an artistic thread running through the family and even as a fourteen-year-old, Maria Ribbing was able to contribute to the family’s income by making woodcuts, like both her brothers who became xylographers.

Thanks to one of her brothers, Maria Ribbing noticed an advertisement in the major evening newspaper Aftonbladet offering a course for women, to prepare girls for the “teaching vocation”. The subjects were not only the traditional ones, but also physics, physiology, botany and zoology. Maria Ribbing applied to the course and in February 1859 she was accepted along with 130 other pupils in the age group 16–54 years old.

The course was a three-year free academy, very popular and where discipline was exemplary. Maria Ribbing wrote: “as happy as we were during these three years, were we never to be again”. The course ended later, but had by then blazed a trail for the state college for the education of schoolmistresses, the Högre Lärarinneseminariet, HLS, that was mainly to have the aim of carrying out teacher training. Maria Ribbing was accepted and also served as a so-called répétitrice, or assistant teacher. In 1864, she was employed as a schoolmistress at the state grammar school for girls. Several testimonies describe her as being “a divinely gifted teacher”. To improve her grasp of subjects other than her own, she also attended other people’s lectures and read English and German in her spare time. Her knowledge and willpower were great and she was especially captivated by natural science and physics. She herself wrote that she also “seems to have developed enormous energy with 70 hours of lessons a week”.

Maria Ribbing came to belong to the circle surrounding the authoress Fredrika Bremer, who often used to listen to her lessons. During that period, she received many of the impressions and impulses that contributed to her liberal view of society and her interest in working for social reform. In the summer of 1863, she was introduced to “young Mr Schoolmaster”, the three-year-younger medical student Seved Ribbing, whom contemporaries understood to be a humanist rather than a scientist. He arrived to give a lecture on the heart. Later, he lectured on the nervous system and soon they were having several conversations on scientific subjects and social issues. They became like twin souls.

Shortly after Seved Ribbing had been awarded his Ph. D., the couple married, in August 1871. After a one-year-long honeymoon and study trip round about in Europe, first and foremost Vienna and Paris, they settled down in Simrishamn, where Seved Ribbing had been accepted for a post at the local hospital. During the years in Simrishamn, their two sons Gustaf and Lännart were born.

After seven years in Simrishamn, the family moved to till Lund, where Seved Ribbing became a professor of paediatrics. They soon purchased Spoletorp, a country estate, which at that time was situated on the outskirts of the town. The same year, their daughter Hedvig was born, and six years later they had a second daughter, Estrid. Arthur Hazelius’ motherless son Gunnar was also invited to live with the Ribbing family at Spoletorp.

The Ribbing couple, “the merciful Samaritans”, carried on extensive charitable and peace work on the quiet. Their home became “a refuge and a spiritual powerhouse in Lund”, and it was visited by varying generations of relatives and friends, not only Swedes but also foreign guests visiting scientific congresses. During the 1860s, the Ribbings took care of Jews from Poland who needed a refuge in Lund. On Maria Ribbing’s direct exhortation, the Isbergska children’s home was founded for unmarried mothers with children. Likewise, the deaconess institution and its activities were close to her heart. She supported the Christian youth movement. She was engaged in the Christian student association and there she got to know Ruth Rouse, who is commonly called her “English daughter”. Maria Ribbing also thought about the Swedes who had emigrated to Copenhagen and via contacts and leverage she got the Swedish church to open a parish in the Danish capital and aid work could begin in 1901.

Maria Ribbing was inspired by a successful initiative in Gävle, where an empty hospital building had been converted into a special nursing home for invalids. Interested women from the upper class in Lund were contacted and an association for the care of the chronically ill (Föreningen för vård af obotligt sjuka) was started in Skåne. In 1898, they had succeeded in collecting enough money, and the enterprise could be started on a small scale in 1902. After a few years, it was time for a new collection, and the new home – Sjukhem för långtidsvård i Lund – was opened in October 1915. It still exists in the memories of older residents in Lund and from 1935 it was called the Ribbingska sjukhemmet, which was the first in Sweden for the elderly.

Maria Ribbing took the initiative in 1894 to her husband’s starting the YMCA Lund, and at the same time she started the ladies’ committee of the YMCA. The year after, probably as a continuation of her involvement in the Lund association for morality and decency, she started an enterprise that was expanding worldwide, the YWCA. Gatherings were often held at Spoletorp. Maria Ribbing sat on the board of the Lund YWCA’s local section, and she was the chairperson from 1903 until her death. Additionally, her work for the Swedish women’s mission association and the Swedish women’s evangelical temperance association may be mentioned. Apart from all that, she was a member of a great number of other associations, among them the Fredrika-Bremer-Förbundet, Lunds husmodersförening, Svenska folkskolans vänner, Gustaf Adolfsföreningen, Svenska Jerusalemföreningen and Samfundet S:t Erik.

Maria Ribbing visited the poor and sick and from her correspondence in the archives we may learn that she never complained, despite her own physical infirmity. Over and above her comprehensive work in various associations and as hospitable hostess at Spoletorp, she was a very sympathetic mother and also helpful to her husband in his assignments as physician, lecturer and popular educator, as many pointed out. It is recounted that she saw to it that there were always extra seats round the dining-room table, and that enough food was always prepared so that it would suffice for more than just the members of the household. Seldom did any of the guestrooms in the large house stand empty.

Her death in 1910 attracted great expressions of honour. When the coffin on its way to the Cathedral in Lund was removed after the fall of darkness, candles were lit in the windows and the day after the church was packed, to the last space. Public and private buildings had their flags at half-mast and many people followed her to her grave to show respect for “the tall figure with the kind and penetrating gaze, clarity of thought and the energy of good will”.

Maria Ribbing’s role in Swedish women’s history has not been paid much attention, but much surviving literature and archival material show that she was a pioneer for higher education for women in the whole of Sweden.

Maria Ribbing died in October 1910. She lies buried in the Northern Cemetery in Lund. 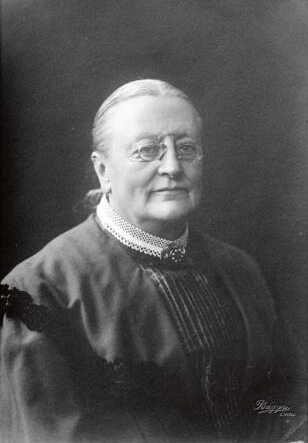