Karin Stenberg was a teacher and a writer. She was one of the founders of the Arvidsjaurs Sameförening (Arvidsjaur's Sami association) and she was an instigator of Svenska Samernas Riksförbund (the national federation of Swedish Sami).

Maria Katrina – known as Karin – Stenberg was the daughter of forest Samis from Västra Kikkejaurs ‘sameby’ (administrative Sami area). She grew up in Araksuolo village northwest of Arvidsjaur. Her parents made their living by herding reindeer. On significant church holidays the family would make their way to the Sami church town known as ‘Lappstaden’ (the Lapp town). These visits made a lasting impact on Karin Stenberg. As an adult she came into conflict with local politicians in defending the need to protect ‘Lappstaden’. Indeed, it is thanks to her efforts that ‘Lappstaden’ has survived and is now considered to be a gem of cultural history. Karin Stenberg considered ‘Lappstaden’ to be a vital part of the Sami culture that she wanted to protect. Karin Stenberg was active in Lapparnas Centralförbund (central federation of Lapps), just like Elsa Laula Renberg. Both these women attended a temperance seminar in Stockholm in 1905. This seminar provided encouragement to these women in their efforts to improve conditions for the Sami.

During Karin Stenberg’s childhood the forest Sami were hard-pressed and their reindeer-herding and small-scale crofting lifestyle was under threat. In contrast to the nomadic Northern Sami the Swedish authorities did not view the forest Sami as ‘real’ Sami. Karin Stenberg decided at an early point that she would campaign for Sami rights and the Sami culture. She began to train as a teacher at the Jokkmokk teacher-training programme. The female teacher from Scania who had no knowledge of Arvidsjaur Sami failed Karin Stenberg in the subject of Sami language. This came as a hard blow to Karin Stenberg, realising that the version of Sami that she spoke was not considered to be ‘real’ Sami. She left the Jokkmokk programme and continued her training at a junior-school teacher-training programme which did not include the Sami language as part of is curriculum. Once she had gained her qualifications she spent 40 years teaching at various schools in the Arvidsjaur municipality.

Karin Stenberg was one of the founders of Arvidsjaurs Sameförening, established in 1916. She was also one of the people behind setting up a Sami farm to serve as a cultural centre. On a visit to Stockholm in 1919 she made a government presentation summarising the harsh conditions endured by the forest Sami. It was thanks to her efforts that a representative of the forest Sami was added to the Lapp committee in 1919. Karin Stenberg and Valdemar Lindholm jointly authored the polemical work entitled Dat läh mijen situd! Det är vår vilja: en vädjan till den svenska nationen från samefolket, published in 1920. The foreword clarifies that the ideas presented in the polemical work were all Karin Stenberg’s. She saw herself as a spokesperson while Lindholm served to present her ideas. The policies of assimilation and the denigration of the Sami were criticised in the work. Similarly, the ethnologist Ossian Elgström’s claim that the Sami were childlike was also criticised. Karin Stenberg saw this as an expression of the majority of the Swedish population’s negative view of the Sami, which thought of them as not mature enough to determine their own way of life. The main objects of her polemical writing in Dat läh mijen situd! Det är vår vilja were the Social-Darwinist ideas that there was not future for the Sami within modern society, which accorded with the majority Swedish population’s ethnocentric- and colonially-inspired ideas of the Sami.

Karin Stenberg was one of the instigators behind Samernas Folkhögskola (Sami public college), established in 1942. She had already been actively involved in planning the 1918 Sami congress in Östersund. Two of her core issues were discussed at the meeting, namely the protection of forest reindeer-herding and improved vocational opportunities for the Sami. Karin Stenberg’s proposal to set up a national Sami organisation was considered at the 1948 congress in Arvidsjaur. The executive committee was tasked with planning the establishment of Svenska Samernas Riksförbund. Karin Stenberg was elected onto the board of this organisation, set up in Jokkmokk in 1950. 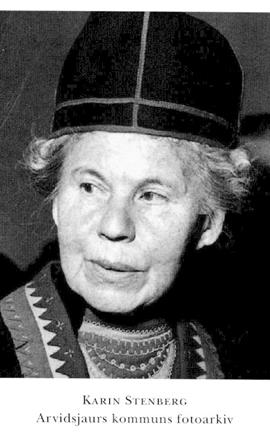