Margareta became a Swedish princess when she married Prince Gustaf Adolf in 1905. Upon the death of Oscar II in 1907, she became crown princess. As royalty, she participated diligently in various charity projects and she contributed to the modernisation of the view of royalty in Sweden.

Margareta, or Margaret Victoria Augusta Charlotte Norah, as she was christened, was born a princess in Great Britain and Ireland in 1882 at Bagshot Park, just outside London. Her father was Duke Arthur of Connaught, prince of Great Britain and Ireland and her mother was Princess Louise of Prussia. As a granddaughter of Queen Victoria, she and her two younger siblings were given a thorough upbringing in the Victorian spirit but with modern elements, and much attention was paid to fostering the children’s creativity.

The family resided at Bagshot Park just outside London, but they also had a London residence, Clarence House on the Mall, for occasions in the capital that craved their presence. Their father’s military assignments took the family on several foreign tours of duty, among others to India for some years at the end of the 1880s. In 1900, her father became the commander of the English troops in Ireland and the year after, the whole family moved there. Apart from a few months in 1902–1903, which they spent in France, the family lived for four years in Ireland. The Emerald Isle made a deep impression on Margaret. Her honeymoon with Prince Gustaf Adolf was for example spent there, and her bridal veil, made of exquisite Irish lace, was a gift from the women of Ireland.

In 1905, the ducal couple with their daughters went on a tour of inspection in the Mediterranean, and in Cairo, Margareta met the Swedish prince Gustaf Adolf. Their engagement was announced, and six months later, on 15 June 1905, their wedding took place in London, in the midst of the crisis of dissolution of the union between Norway and Sweden. The Swedish press of the time was positive to the couple’s union, which was also interpreted in political terms. The conservative, liberal and socialist daily newspapers in Sweden all praised the new union that people hoped would bring about increased English influence at the Swedish court. This political interpretation was also made from the English side since the king at that time, Edward VII, was keen to see English princesses on the Scandinavian thrones to prevent further German influence.

The newly-weds moved into an apartment in the royal castle in Stockholm and Margareta bore five children the following years: Gustaf Adolf (1906), Sigvard (1907), Ingrid (1910), Bertil (1912) and Carl Johan (1916). The crown prince and crown princess also allowed the press to gain certain insight into their family life in a completely new way. Photographs and reportage on the family were published and contributed to the modernisation of how people viewed the royal family. They were presented as being in tune with the times. Margareta also received a good deal of attention for breast-feeding her children. So even if she mainly spent her time on her family, she was still understood to be a modern woman who listened to new scientific information and who was keen on outdoor life and sport. The latter also attracted a certain amount of attention at that time. She enjoyed skiing and skating for example and photographs of her skating and skiing were published in the press. She founded a bandy team: Kronprinsessans Hockeyklubb, in which she herself participated enthusiastically. Margareta was hungry for knowledge and in 1911 she helped to found the Stockholm Ladies’ Club (later the Lyceumklubben in Stockholm), that offered lectures and cultural activities for society ladies in Stockholm.

The crown prince couple had been given Sofiero Castle outside Helsingborg as a wedding present. It had previously been owned by Queen Sofia. Gustaf Adolf was the Duke of Skåne and the family spent most of their summers there. To start with, the castle was dark and damp, but both Margareta and Gustaf Adolf were interested in gardening and spent much effort on the garden layout at Sofiero. Even as a child, Margareta had helped to plan parts of Bagshot Park.

Crown Princess Margareta wrote and illustrated several books about the work on Sofiero’s castle park: Vår trädgård på Sofiero came out in 1915 and Från blomstergården in 1917. The profits went to schools of housekeeping including childcare. In 1911, the association Föreningen för husmodersskolor och barnavård was restructured and Margareta was the honorary chairperson. This was her way of contributing.

As royalty, it was also an obvious choice to participate in various forms of charity work, and she was actively engaged in several aid organisations, not allowing herself only to be used as a figurehead. During the First World War, she worked for the Crown Princess’s supply centre for the clothing and equipment of the military, in cooperation with the Red Cross, in order to supply Swedish soldiers with better clothing. Prisoners of war in Europe were sent gift parcels that Margareta had helped to organise.

During the first world war, she also worked tirelessly with charity for the less well off in the community. Among other things, she organised the money collection Margaretainsamlingen för de fattiga in 1917. Crown Princess Margareta was also active in working to improve the conditions in the community for people with impaired sight. In 1917, she started the foundation Kronprinsessan Margaretas Arbetsnämnd för de blinda of which she was the honorary chairperson, and in this case too, was active as such. The foundation still exists today. Margareta was the honorary chairperson of De Blindas Förening and a protector in the Föreningen Vaksamhet, that fought internationally against the white slave trade.

Margareta was artistically gifted and she painted and photographed a good deal all her life. During her time in Ireland, she had come to know the Anglo-Irish artist Clare Frewen and they kept in contact. Clare Frewen came many times on visits to Stockholm and then they often painted together. Margareta also had contact with Prince Eugen, who was seen as a professional artist and was a friend of the artist Anna Boberg and her husband Ferdinand Boberg, also an artist. Margareta’s paintings were seldom shown during her lifetime, with two exceptions: she participated with a few works in the Baltic Exhibition in 1914 in Malmö and also exhibited in March 1919 at an exhibition organised by Sällskapet Nya Idun. In the Baltic Exhibition, she also participated as a landscape gardener along with Ferdinand Boberg. The Margareta pavilion in Malmö is a reminder of this. In 1917 she was elected as an artist to the Sällskapet Nya Idun, since she was a woman with a profession. Her artistic streak was also evident in her engagement for textile handicrafts. She embroidered bookmark ribbons, altar cloths and vestments for various churches.

During the autumn of 1919, Margareta suffered a number of troublesome infections from which she never really recovered, and on 1 May 1920 she died at Stockholm Castle, at only 38 years of age. She left behind five small children and a shocked husband. Her posthumous reputation is of being a good mother and role model who had succeeded in carrying out her royal duties and modernising them even while the family always remained her main focus. In more modern times, her artistic side, with painting and photography, has been emphasised. Her paintings have also been exhibited in recent times.

Crown Princess Margareta had her roots in Victorian England, but in Sweden she participated in the modernisation of the Swedish royal family and foreshadowed in many ways the image of the next generation, the Haga princesses during the 1930s and 1940s, as participants in the Swedish welfare state.

Crown Princess Margareta’s grave is in the Royal Cemetery in Haga Park, Solna. 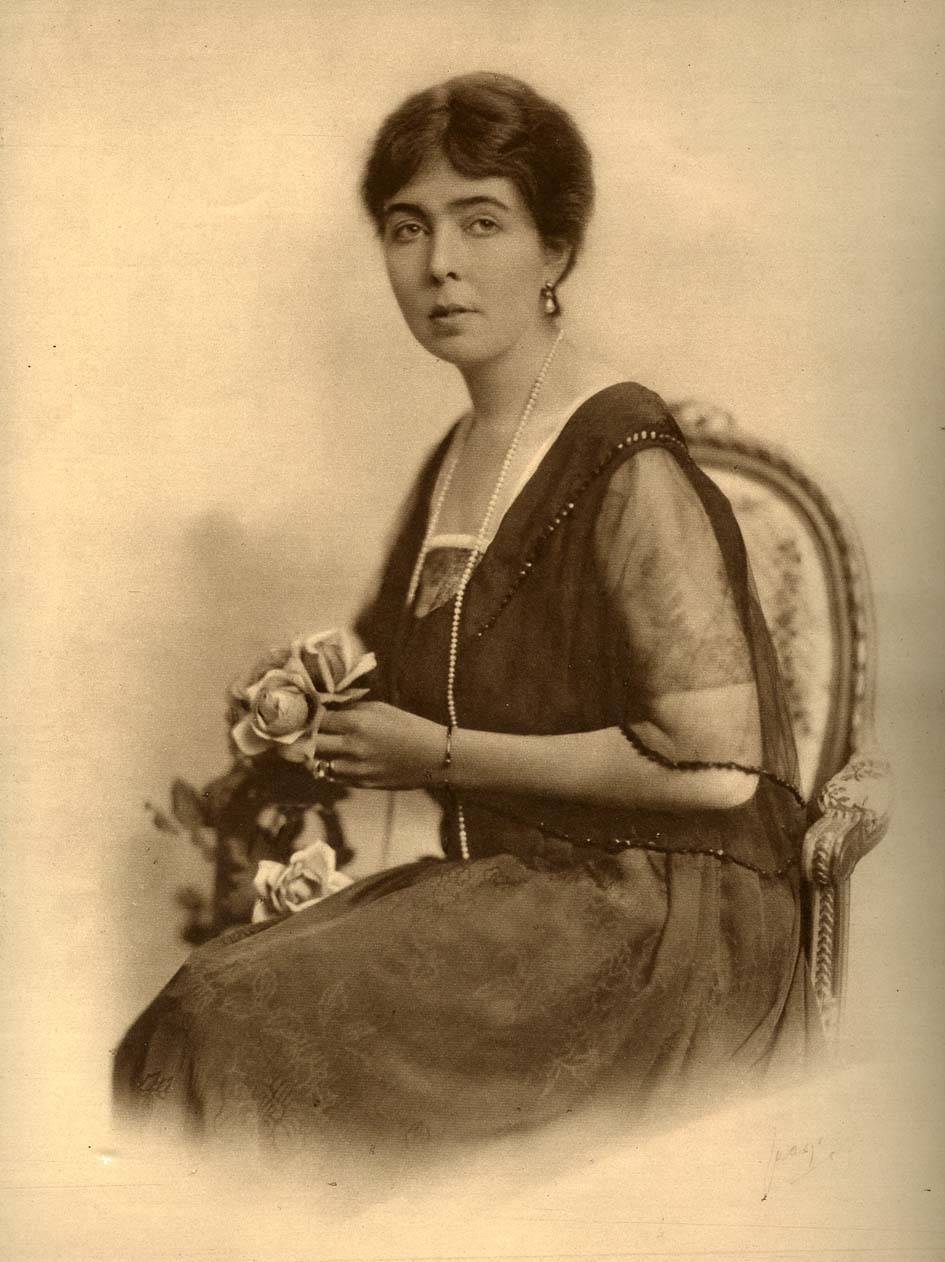