Maj Bring was an artist who was very active during the first half of the 20th century. When she turned 80 she experienced a major artistic renewal in her output.

Maj Bring was born in Uppsala in 1880. Her father was a district judge at Uppsala magistrates’ court. He was also very literary and musical. It may have been following a visit she and her father made to the family of Urban and Lotten von Feilitzen in Östergötland in 1899 that Maj Bring decided to become an artist. Lotten was one of the most eminent pianists in Sweden, despite the fact that her own father, the composer Adolf Fredrik Lindblad, had forbidden her from becoming a concert pianist and she taught Maj Bring to play the piano. Maj Bring spent several summers with the artistic family and became particularly close to the daughter Anna Casparsson, who became a well-known Saltsjöbaden artist in her own right.

Maj Bring began to attend Valand målarskola (today Valand Academy) in Gothenburg in 1900. The idea for this came from her paternal uncle in Gothenburg who wanted his daughter to attend the school along with Maj Bring. At that time Carl Wilhelmson was a teacher and the director Valand målarskola and Maj Bring found the atmosphere to be liberating and welcoming as Carl Wilhelmson treated all his students as equals regardless of their gender. She settled in well and made a lot of friends, in addition to her cousin Elsa, including Axel Törneman, Tora Vega Homström, Gerhard Henning, and Ester Almqvist. However, it was not long before Maj Bring started looking further afield and in 1902 she applied to the Kungliga Akademi för de fria konsterna (Konstakademien, Royal Academy of Art) in Stockholm, which enjoyed a superior reputation to Valand målarskolan. However, once she had started attending the academy she quickly realised that it was run according to very conservative ideals. Male and female students were segregated and taught in separate sections, in contrast to Valand where all the students painted together. The teachers at the academy included Georg von Rosen, Gustav Cederström, and Oscar Björck, all of whom belonged to an older generation. She longed to return to Gothenburg but carried on at the academy. She finally got back to Gothenburg for a single term in the autumn of 1905 to study with her much-loved teacher Carl Wilhelmson. This hiatus gave her the strength to complete her remaining terms at the academy.

Having completed her education Maj Bring travelled to Paris in 1908 to continue her painting studies. She remained in the French capital for quite some time. In early 1910 she attended Henri Matisse’s painting school for a few months. She got on well with the French painter and stayed in touch with him, and always called on him when she visited Paris and Nice.

After returning to Stockholm in 1910 her parents agreed to let her rent a small apartment on Fjällgatan in Stockholm. Her friends Mollie Faustman and Ellen Trotzig would visit her to paint. Once a week Carl Wilhelmson would also visit, as he was now living in Stockholm, in order to cast a critical eye over the paintings. It was a sort of informal painting school.

Maj Bring made her debut in 1913 when she, Mollie Faustman, Oskar Molitor and Edvin Ollers held a joint exhibition. She went on to exhibit her work in many exhibitions of landscape paintings and portraits. Her first major solo exhibit was held in 1930 at Galleri Gummesons in Stockholm, at which she displayed about 50 of her paintings and drawings. She gained both positive and negative reviews, however the extraordinarily negative criticism by Karl Asplund of Svenska Dagbladet appears to have hit her hard. It would be another 23 years before she ever held another solo exhibition. Instead she opened her own painting school, which she ran from 1930 until 1939, and in 1949, as part of her active membership in artistic circles, she became the chair of Föreningen Svenska konstnärinnor (Swedish association of female artists). She held the position for two years.

Following strong encouragement, particularly from her friend Vera Nilsson, she once again exhibited her works in 1953, this time as part of a retrospective exhibition at Konstnärhuset in Stockholm. At this point she was 73 years old and believed this would be her last display. Vera Nilsson even referred to it as “the Maj Bring memorial exhibition”. However, the following year she held an almost equally substantial exhibition in Norrköping.

Once she turned 80 Maj Bring experienced a new lease of life and a turning point in her art. Following the death of her close friend Anna Casparsson in 1961 she had been given a collection of glass beads and sequins of the sort that her friend had used in her remarkable magical embroidery work. This was a very timely gift as Maj Bring’s eyesight was worsening and she was finding it increasingly difficult to paint. She now began to use new materials in her paintings and began to glue pearls onto them and to cut out coloured bits of paper in order to create an image. She was possibly also inspired by Matisse’s later collage work, which she had seen during her last visit to the French painter in 1950. Maj Bring created atmospheric images such as Nattens reflexer, which shimmered with glued-on pearls, and she created collages inspired by Biblical motifs.

In 1965, aged 85, Maj Bring exhibited her latest work at the Hos Petra gallery in Stockholm. Maj Bring was now viewed by the art critics as an independent and original artist and enjoyed a new artistic breakthrough. She said to her relative Dag Widman, who had written an article in her catalogue: “For the first time in my life I feel that this is me”. Her 1969 exhibition at the leading Stockholm gallery called Doktor Glas would be her last. She was almost 90 at that point.

Maj Bring made her living as an artist for her entire life, and at the very end of her long life she gained significant recognition for it. She had important artistic connections with Vera Nilsson, Siri Derkert, Maja Braathen, Ninnan Santesson, and Berta Hansson. They supported and encouraged each other and met regularly in order to paint together.

Maj Bring was also a good storyteller. She published her memoirs, entitled Motsols, in 1960. Her accounts of her life up to the mid-1950s are both dramatic and humorous.

Maj Bring died in Stockholm in 1971. She is buried at the Gamla cemetery in Uppsala. 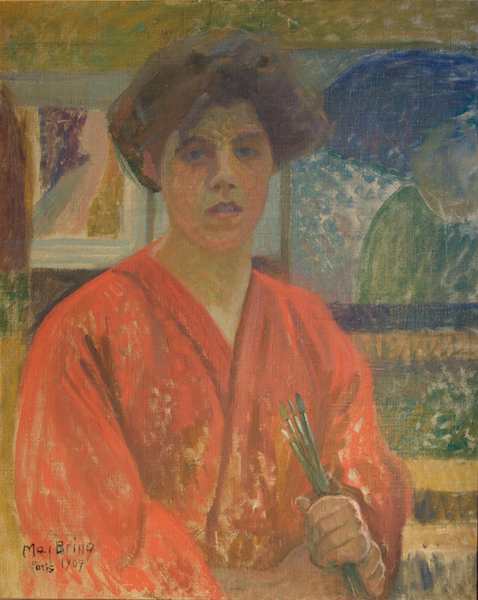