Maggie Wibom was a sculptor, a ceramist, and a pioneer within her field who was active during the 1920s and 1930s. She worked at Bo Fajans, Gefle Porslinsfabriks AB and St Eriks Lervarufabriker before, in 1938, establishing her own company named Stockholms Keramik AB.

Maggie Wibom was born in 1899 in Gävle Heliga Trefaldighets congregation. The birth records note her as illegitimate, just like her sister who was 12 years her senior. Their mother, Anna Julia Wibom, was an ironing-woman and she died in 1919. Maggie Wibom presumably had a very simple childhood. After attending junior school and vocational school, which she finished in 1912, there is evidence that she undertook business studies. Maggie Wibom was financially supported by her sister, Helfrid Wibom later married as Joachimsson, and her husband at the time, and she began to attend Högre konstindustriella skolan (HKS, now Konstfack, college of arts, crafts, and design) in Stockholm in 1921. She graduated from the college in 1924 as a qualified sculptor. Maggie Wibom’s working career began in 1925 with a job at Bo Fajans in Gävle. During the period of 1933–1934 she produced commissions on a freelance basis for Gefle Porlinsfabriks AB and from 1936–1937 she worked freelance for St Eriks Lervarufabriker in Uppsala. In 1938 Föreningen Svenska konstnärinnor appointed Maggie Wibom as their exhibition commissioner and that same year she set up her own company, Stockholms Keramik AB. Due to illness the company was declared bankrupt in 1950.

Maggie Wibom gained top marks in figure modelling and decorative modelling when she qualified as a sculptor in May 1924. She was also awarded a stipend from Ulla Fröberg-Cramér’s foundation. In the autumn of that year she went on a study trip to Germany, intending to work there professionally as a sculptor but instead she returned to her hometown and found employment at Bo Fajans. She was the first fulltime decorator to be hired by the company and she began working as an assistant to Eva Jancke-Björk, the sole female artist already employed there. A few years later her job changed and she now served as an artist who designed her own models. The rustic designs she produced on vases, bowls, and jugs often displayed decorations in relief or made use of geometric designs.

Whenever Bo Fajans entered exhibitions during the 1926–1932 period Maggie Wibom created items to represent the company using her own models. These exhibitions included the 1929 International Exposition at Barcelona, the Stockholm Exhibition of 1930, and the 1931 Swedish Exhibition of Industrial Art held in London. In 1930 Stockholm National Museum purchased a large punchbowl she had produced, decorated with trumpeting angels created in heavy relief. The Museum of Fine Arts in Boston purchased a large hand-painted serving dish she had created. In 1932 Maggie Wibom and Eva Jancke-Björk held a joint exhibition at Röhsska konstlöjdmuseet.

During her time working for Gefle Porslinfabriks AB Maggie Wibom created eleven boldly-shaped and robustly charming stoneware figures. She glazed them using a thin creamy-white faience which allowed the reddish-brown colour of the stoneware to shine through. Further to her main job for the company she was also commissioned to produce a series of portrait busts of the leading men of Gästrikland. In 1934 she was commissioned by Staffan congregation in Gävle to create a statue for their newly-built church and this image of St Staffan can still be seen in the church choir. That same year Maggie Wibom submitted an entry to a Madonna-themed exhibition in Florence: her work portrayed a kneeling Madonna figure with the holy infant in her lap. The original sculpture was created at Gefle Porslinfabriks AB and was purchased by a museum in Florence.

In 1936 Maggie Wibom received a travel stipend from Kommerskollegium (National Board of Trade) which enabled her to go to Hungary and Austria where she gained new artistic inspiration. In the spring of 1937 she exhibited her work at Svensk hemslöjd in Stockholm for which she garnered very positive reviews. Her new style of artistic expression was displayed on jugs and pitchers which were decorated with powerful, yet pared-down, figures. She attracted attention for her original use of finishes in which dark blue was combined with white, sometimes with a rough, earth brown finish which allowed the original clay to shine through.

In the summer of 1937 Maggie Wibom went on a study trip through France, Great Britain, and Denmark thanks to a stipend received from Gefle Handtverksförening and Kommerskollegium. She visited craftspeople in their workshops, she attended the 1937 World’s Fair in Paris – Exposition Internationale des Arts et Techniques dans la Vie Moderne – as well as Manufacture Nationale de Sèvres. Empowered by her study trips and dreaming of running her own place Maggie Wibom set up her own workshop on 15 January 1938 called Stockholms Keramik AB, located at Grev Turegatan 9 in Stockholm. She ran this workshop from 1938–1949, a creative and intensive period during which she produced her biggest and most artistic work, attracting the attention of the press. She created new glazings, reinvigorated her style of expression and made use of clay and glazing techniques in every possible way. Her creative juices overflowed. She sought to produce her work by hand and to create “personally coloured items”. Hjalmar Wallström, a master turner with whom she had worked at St Eriks Lervarufabriker, moved with her to Grev Turegatan, remaining there until 1946 by which point he was 78 years old. Maggie Wibom produced a large fountain sculpture in artificial stone, entitled Två ungar bär en skål, made for a private house in Djursholm. She also created a garden sculpture called Den första fisken for Sandviken, as well as a wall decoration called Pepparrot Falleralla for Stadshotellet restaurant in Enköping.

It was not long before Maggie Wibom began to produce coffee and tea service sets, serving dishes and bowls. The most important and the largest element of her company’s production comprised unique items, however. Her clear blue glassware became very popular and art reviewers gave it the nickname “Wibomblå” (Wibom-blue). The carved decorative elements where the original clay was allowed to appear through the glazing and form its own patterns were striking. She only used Swedish clay. Her ceramic work was sold at department stores such as Nordiska Kompaniet (NK) and Ditzingers, as well as in handicrafts shops.

The turnover at Stockholms Keramik AB increased markedly which led to major renovations during the 1943–1944 period in an attempt to streamline production: the workshop was on the ground floor, whilst the cellar contained exhibition space, a glazing lab for all the related decorative and glazing processes, and there was a new turning area set behind glass doors in order to retain the humidity in the room. A new more powerful oven from ASEA was also installed. An additional turner was employed along with three assistants to undertake the decorative work, and sometimes apprentices worked there too.

1944 became a very important year for Maggie Wibom. It began with her own showcase at Stockholm National museum as part of the Kontakt med nyttokonsten exhibition. The high point of the year was her invitation to Röhsska konstslöjdmuseet to hold a major solo exhibition entitled Ny keramik which opened that May. Nearly 600 pieces were on show, both new items and those borrowed from elsewhere. The exhibition was a major success and it ran for an extra six-week period. Reviewers showered acclaim over the glazings, the confident style of the items, and the modernist style of expression. Maggie Wibom was invited to attend King Gustaf V at his summer residence on Särö so that he could congratulate her in person. She presented the king with a gift of a vase in grey-white craquelure glazing with decoration based on the theme of the tennis-playing king on one side and his alias, Mr G, on the other side.

In 1945 Maggie Wibom completed a commission for the owner of Centralkaféet in Gävle. This was a wall decoration comprising 150 ceramic plates. The motif on display was the town’s Rådhustorg (town hall square) as it had looked in the 1840s and the work can still be seen today. In the summer of 1946 she held three exhibitions: one in Cape Town, South Africa, one in Reykjavík, Iceland, and one at Gävle’s major Jubilee exhibition in 1946 to commemorate that town’s 500th anniversary. Maggie Wibom’s products were always sold as “Maggie Wibom” items, not as Stockholms Keramik AB. She used her own name as a guarantee of the quality of her work.

The Social Democratic party women’s club in Gävle commissioned Maggie Wibom to create a wall decoration for the newly-built Folkets Hus building. Her work was entitled Ungdom tar vid and it was inaugurated in March 1949. It portrays Kata Dalström speaking at Sätraåsen near Gävle. Maggie Wibom also produced a wall decoration entitled Skörd for Skogs- och Lantbruksskolan Nytorp in Arbrå, Bollnäs municipality. It is not clear precisely when this work was installed but it is signed and dated 1950. Both of these works remain in situ and can be seen.

Maggie Wibom gave an interview ahead of her 50th birthday in which she revealed that she was completely taken up by preparations for a major exhibition to be held at Folkets Hus a month later, after which she “would take a break for a while. And then I will primarily focus on creating original pieces”. However, this major exhibition never took place. Instead Maggie Wibom’s company was declared bankrupt and all its contents and furniture was sold in early 1950. She never returned to Stockholm.

During the 1949–1950 period Maggie Wibom began to suffer from a dementia-type disease. For a brief period from 1952 onwards she was cared for at Göransgårdens hospital near Uppsala, followed by a stint at Sidsjön hospital near Sundsvall. She died in January 1961 having just turned 61 years old. 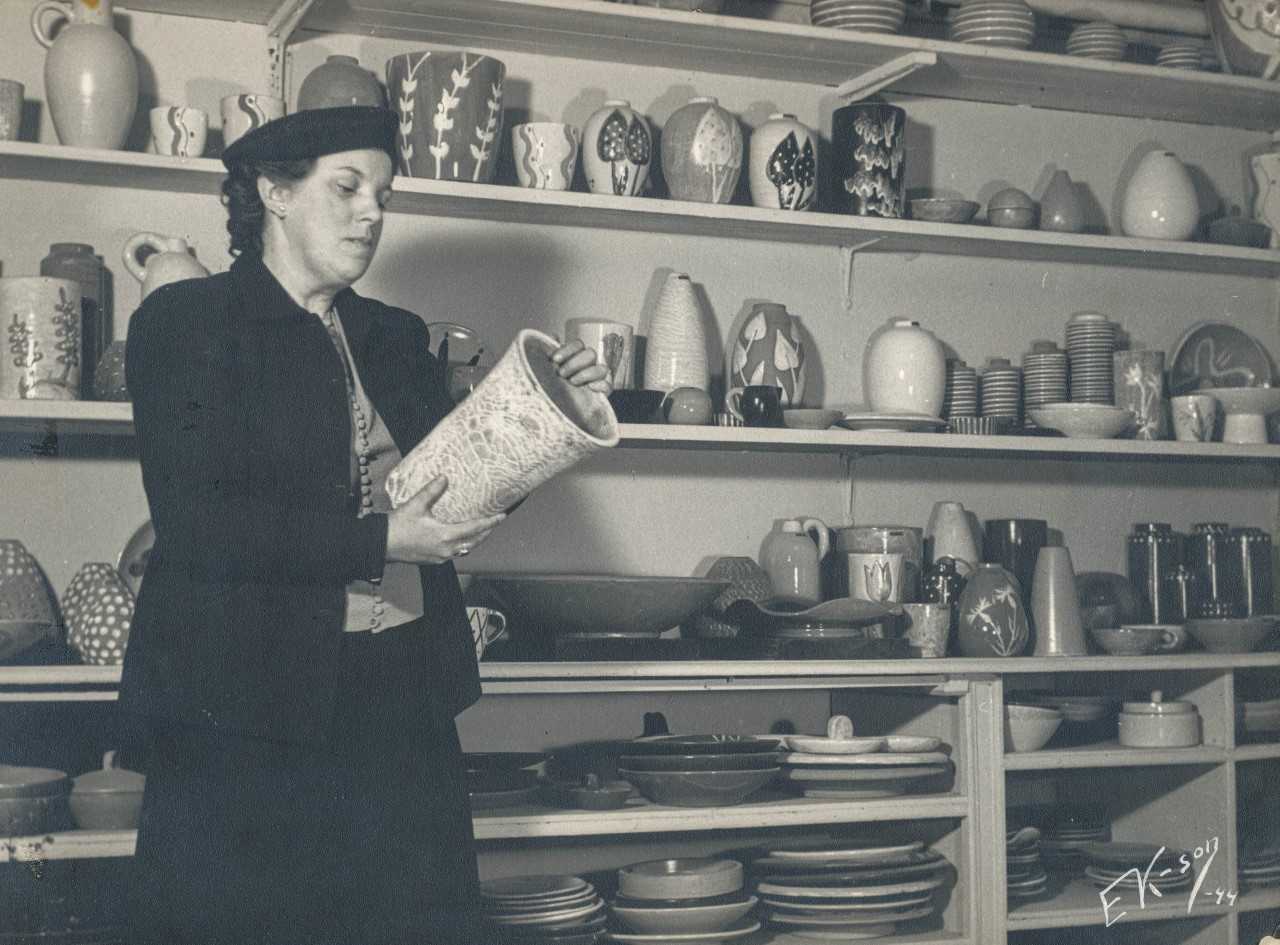