Magdalena Rudenschöld was a Swedish countess and lady-in-waiting and a significant political figure of the late 1700s.

Magdalena Rudenschöld was born in 1766. She was the youngest of her siblings who survived into adulthood. Her father, Carl Rudenschöld, had been ennobled following a successful career as a government functionary whilst her mother, Christina Sophia Bielke, was a countess born into one of the most prominent noble families in Sweden. Magdalena Rudenschöld was well-educated and mastered the skill of writing in French very well. When she was 17 years old she succeeded her sister in the highly desirable position of lady-in-waiting to Princess Sofia Albertina.

Magdalena Rudenschöld’s personality and beauty quickly generated a succession of admirers and suiters at the Gustavian court. She settled her choice, however, on King Gustav III’s favourite, Gustaf Mauritz Armfelt. Their relationship probably started in 1784 when he was already engaged to Hedvig Ulrika De la Gardie, and it continued ten years into his marriage. According to Armfelt himself his feelings for Magdalena Rudenschöld were not serious whereas she, in contrast, was devoted to him. Their relationship garnered unusual amounts of attention because Magdalena Rudenschöld never married and she and Armfelt never cared about hiding their relationship. She did, however, accompany Sofia Albertina on a trip to Berlin in 1787 in order to deflect attention from her pregnancy with Armfelt’s child. Indeed, during their relationship she gave birth to two children but both of them died in infancy.

Following the death of King Gustav III in 1792 Gustaf Mauritz Armfelt lost his position within the ruling elite as a result of the ensuing struggle for political power. The minority government, led by Duke Carl and Gustaf Adolf Reuterholm, sought to render Gustav III’s previous supporters powerless and to force government into a more liberal direction. Armfelt was sent abroad as the Swedish minister to Naples. Magdalena Rudenschöld met him one last time before he departed and after that their relationship was only maintained by letter.

Magdalena Rudenschöld had a well-established network of contacts within the royal household, the court, and amongst the diplomatic circle. She was an active hostess in Stockholm and remained constantly loyal to Gustaf Mauritz Armfelt. It was thus only natural that he sought her out as a collaborator for his Italian-based political schemes. He sent her written requests seeking information and asking her to use her influence to foster a favourable attitude towards him. This group of plotters – Gustaf Mauritz Armfelt, Magdalena Rudenschöld, and some other friends at court – came up with a plan to enact a governmental coup in Sweden, with Russian military support and domestic support from the peasantry of Dalarna. They sought to replace the minority government with one led by Gustaf Mauritz Armfelt instead. Magdalena Rudenschöld offered to travel, in the company of her friend the Russian baroness Elisabeth Divoff, to St Petersburg in order to petition Catherine the Great for her diplomatic and military support. However, this project never came to fruition.

Despite repeated warnings that her correspondence was being monitored by the minority government Magdalena Rudenschöld continued her close relationship with her lover in Naples. This resulted in her arrest just before Christmas 1793. At first the confiscated letters and interrogations revealed nothing more compromising than criticism of the government and loose ties to Russia. In early April 1794, however, a new pile of confiscated letters arrived in Stockholm from Italy. These made mention of a Russian fleet coming to Stockholm in support of Armfelt’s coup, as well as discussion of Magdalena Rudenschöld helping Armfelt to call a parliament in Falun which the Russian ambassador Otto Magnus Stackelberg was to attend in order to influence public opinion. When Magdalena Rudenschöld was presented with the information contained in these letters she confessed to the planned coup and her involvement.

The interrogations and court cases of those involved in the Armfelt plot occurred in the midst of a comprehensive mudslinging campaign. Gustaf Adolf Reuterholm wanted to strengthen the prosecution’s case by publicly discrediting those involved on moral grounds and by making the matter seem greater than an internal political power struggle. He allowed love letters between Margareta Rudenschöld and Gustaf Mauritz Armfelt to be published even though they contained no political content and he also circulated stories about Magdalena Rudenschöld having wilfully aborted her pregnancies with Armfelt. In the late summer of 1794 the plotters were presented with sentences ranging from the death penalty, the loss of their noble status, their property, public pillorying, and forced labour. Eventually all these convictions were reduced, albeit Magdalena Rudenschöld and Johan Albert Ehrenström were still pilloried in Stockholm in September 1794.

The pillorying and defamation of Magdalena Rudenschöld rendered the affair a scandal, particularly at the court and among the political elite. However, Princess Sofia Albertina and the Duchess Hedvig Elisabeth Charlotta headed a group who came to Magdalena Rudenschöld’s defence. They petitioned Duke Carl and Gustaf Adolf Reuterholm for her complete pardon. This affair caused a final split between Reuterholm and his royal in-laws, further undermining his already shaky political position.

Following a two-year stint at the ‘spinning-home’ (a type of women’s prison where inmates were forced to spin yarn) Magdalena Rudenschöld was banished to a property on Gotland in 1796 where she was kept isolated from family and friends. She was later allowed to return to Stockholm and then settled with her mother. Magdalena Rudenschöld faced social stigma and, in 1801, her family rejected her due to her sexual exploits. Following his return to Sweden Gustaf Mauritz Armfelt helped his former lover by funding her living expenses abroad, as well as providing her with an annual retainer. Magdalena Rudenschöld spent the next ten years in a small village near Geneva, where one of her companions was the French author and salon-hostess Madame de Staël. In 1812 Magdalena Rudenschöld returned to Sweden in order to run her brother’s household after he had become a widower. She died in Stockholm in 1823.

Within the Gustavian court circles long-term extra-marital affairs and their political connotations were nothing remarkable. Nevertheless, historical circumstances have resulted in the relationship between Gustaf Mauritz Armfelt and Magdalena Rudenschöld, as well as her political role, becoming known to posterity. Their surviving correspondence testifies to that woman’s deep familiarity with and involvement in political life and her lover’s high expectations of her role as a political companion. Her life story is particularly interesting given the nuanced perspective it sheds on the prevailing understanding that a woman of her standing had to be a married woman in order to be able to play a significant role in the grey area between being a hostess and an unofficial political agent. 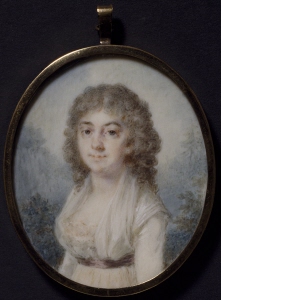