Magdalena Hising was a bishop’s wife in Västerås in the 1600s. She contributed to Christian education and care of the poor in the diocesan town. She is thus an example of how women, often working alongside their husbands, helped to build up the social and educative activities of the Swedish church.

Magdalena (Malin) Hising was born in Arboga in 1602, the daughter of Carolus Hising, a school headmaster, and Cecilia Hintze. Two years later, her father was appointed vicar in Fellingsbro in the province of Västmanland, whither the family moved. The family eventually had sixteen children, of whom Magdalena Hising was the eldest.

Magdalena Hising was given a good education in her parents’ home and was well equipped for both learned studies and housekeeping when she married the newly appointed bishop of Västerås, Johannes Rudbeckius, in 1620. He was a widower after his wife and their first-born child had died in childbirth. She was the archbishop’s daughter, Christina Bothniensis. Magdalena Hising’s husband, who was more than twenty years older than she, had a long academic and administrative career behind him. He had previously been court chaplain to Gustaf II Adolf and he had revised the Swedish translation of the bible in 1618. In the diocese of Västerås, he organised a system of population registration that became known all over the country. Magdalena Hising was barely eighteen years old when she became a bishop’s wife and in her marriage to Johannes Rudbeckius she gave birth to 11 children in rapid succession in 1620–1633, of whom four died in infancy. Her sons Nicolaus and Petrus became bishops in Västerås and Skara respectively. The most well-known in the sibling group was however their son Olaus (Olof) Rudbeck, born in 1630, and famous for his version of Swedish history, known now as “rudbeckianism”.

After giving birth to her children, somewhat more than a decade followed when Magdalena Hising’s energy could be devoted to teaching the Christian faith to the employees at the bishop’s palace. She was a respected woman with great authority, and she supported her husband in battles against the worldly powers for influence in the church. The daily responsibility for the work in the bishop’s palace, when her husband was away on his travels, demanded an enterprising and firm woman.

Educational matters and the care of the poor in her immediate vicinity and in the whole diocese engaged both Magdalena Hising and her husband. Sweden’s first upper secondary school was opened in 1623 in Västerås on the initiative of Johannes Rudbeckius, but girls were not allowed to attend. A type of girls’ school for ”small girl children” was started on the bishop’s initiative, mostly for poor girls who were taught basic skills like reading, writing, sewing and the Christian catechism. The question of starting such a school had already been raised in 1628. There were many fatherless and motherless children who needed to be taken care of. Johannes Rudbeckius offered a plot of land where two cottages were built with plain furnishings in the form of a brick fireplace, benches, stools and tables. The plague that raged in 1629–1630 delayed the building so the school was first inaugurated in 1632. At the ceremony, the sermon preached was from the book of Daniel, about the bringing-up of Susanna. A ”teacher-mother” ran the activities with her husband as principal and her sister as an assistant.

In Johannes Rudbeckius’ diary from the inauguration day on 2 July 1632 of the ”Girls’ school” is the sentence: ”Fear of the Lord is the beginning of wisdom. Thus my daughter if thou wilt be wise”. Women were also included in the broad educational programme with the support of the 1571 Church regime that stated that girls must be given tuition, which was in tune with the ideals of the Reformation. Johannes Rudbeckius had also been impressed by German role models during his travels. This upbringing of girls received support and inspiration from the learned bishop’s wife Magdalena Hising. There are no real written records left after Magdalena Hising, apart from the funeral sermon written by the next bishop in succession, her son-in-law Olaus Laurelius after her death in 1649. Apart from religious expositions, some attempts are made to describe her as a person: that she gladly visited the sick and injured and that nobody in need ever left her door “unhelped”.

One palpable testimony to the person Magdalena Hising was found in the grammar school’s attic in Västerås as late as 1932. It was a rolled-up stately portrait of her as bishop’s wife, completed in 1643–1644 by the church and portrait painter Johan Friitz. It must have been painted at the same time as a portrait of her husband, the ageing bishop. The portrait of Johannes Rudbeckius had of course been hanging in the bishop’s palace in Västerås for a long time. The present bishop, Mikael Mogren (2015–) has had a copy of the painting of Magdalena Hising made to make the pair, who worked together, complete. A popular café in the consistory building beside Västerås Cathedral has been christened Café Malin in connection with Rudbeckius Year 2019. It was then 400 years since Johannes Rudbeckius had become bishop in Västerås.

Magdalena Hising, worn out by all her childbirths, died in 1649 at the age of only 47, three years after her husband’s death, as can be seen from the handsome tombstone in Västerås Cathedral. 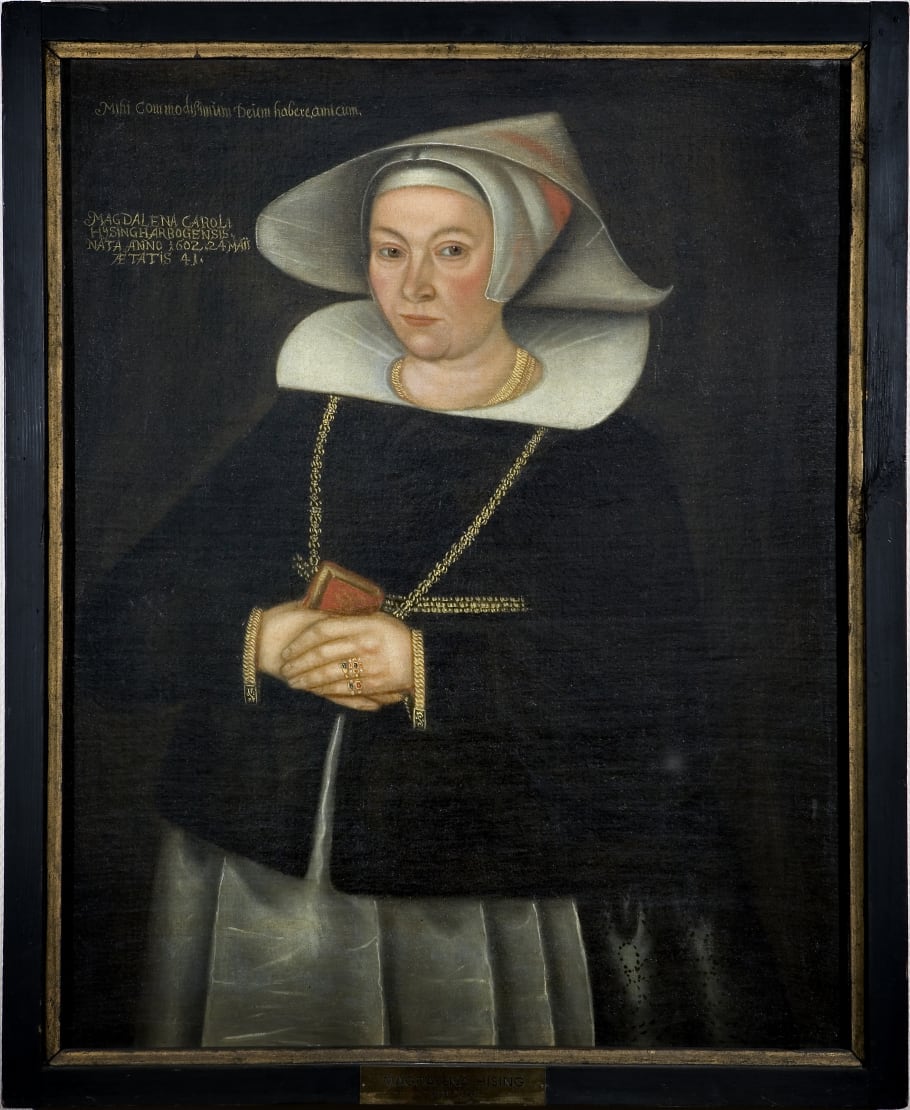