Lotten Edholm was a lady-in-waiting and a pioneer of the Swedish Red Cross organisation.

Lotten Edholm was born Lovisa Christina Charlotta Heijne in Örebro in 1839. She spent her childhood at Edeby manor in Södermanland. At the age of 23 she became a lady-in-waiting to Dowager Queen Josefina. It was at the royal court that she met Edward Edholm, who began to serve as the dowager queen’s physician from 1866 onwards. The following year the couple got married. They moved into what used to be the medical association building at Nya Kungsholmsbrogatan, but their connection to the royal court did not end there.

Lotten Edholm was a musical person who was the unifying force for a choir that was about 20-strong and that used to perform during musical evenings held at the royal palace. After the death of the dowager queen this choir continued to perform for her musical daughter, Princess Eugénie. Despite her lack of training in music and composing Lotten Edholm still wrote pieces of music which were played during private performances. She mainly did this before her marriage and after her husband had passed away.

Lotten Edholm’s greatest social contribution was the work she did within the Red Cross. In 1864 Sweden signed up to the Geneva Convention and that same year a small circle of ladies at the royal court began to work on behalf humanitarian efforts. Initially they were led by the dowager queen and Queen Lovisa, but it was not long before Lotten Edholm took the helm and set up the Red Cross women’s committee. For a long time Lotten Edholm served as the organisation’s anchor and was its chair from 1865–1906.

The Red Cross established a nurses’ home in 1891 located at Mäster Samuelsgatan 60 in Stockholm. Miss Elisabeth Holmgren was appointed the home’s director and Lotten Edholm was elected as deputy-chair of the home’s board. Her brother, Axel von Heijne, was appointed head treasurer. Nine years later Lotten Edholm initiated an appeal to procure new premises for the enterprise. It may have been Lotten Edholm herself who wrote to the Helsingborgs Dagblad newspaper on 6 April 1900 in the hopes of raising the funds for the new premises: “The future will always be behind an impenetrable veil. We only have one time to call our own – the present. This makes it imperative that we seize the day”.

In 1905 Lotten Edholm was celebrated for the 40 years’ worth of efforts she had made on behalf of the Red Cross. She had been one of the first women to take an active interest and, in an interview with the Helsingborgs Dagblad newspaper, she revealed that the Red Cross at the time had 350 nurses “at its disposal” ready to jump into action in the event of war. The organisation also ran widely-available “Good Samaritan” (first-aid) courses. At this time there were 20,000 Good Samaritans, that is qualified people throughout Sweden who were ready to provide first-aid at accidents whilst awaiting the arrival of medically-trained professionals.

Lotten Edholm was also forerunner in another sphere, namely she was the first person to organise cooking classes for the upper classes of society. She held her first class in 1886 at Arvfurstens palats in Stockholm. There participants had access to almost any kind of kitchen equipment required.

Lotten Edholm’s husband died in 1913 and she then went on to live a more retiring lifestyle, albeit no less productive a life. This included serving as chair of the Red Cross’ hospice until 1918 and writing her memoires, entitled Från barndom till ålderdom, which were published on her 80th birthday in 1919. Indeed, she continued producing handicrafts and making music. An obituary published in the Svenska Dagbladet newspaper notes: “Right up into her later years she created beautiful handicrafts, a skill in which she was a true artist, and produced musical compositions – the elixir of her life, as she termed it – as easily and as nimbly as she had done in her youth.”

Lotten Edholm died in Stockholm in 1930, aged 91. She is buried at Norra begravningsplatsen (the Northern Cemetery) in Solna, along with her husband and several of her children. 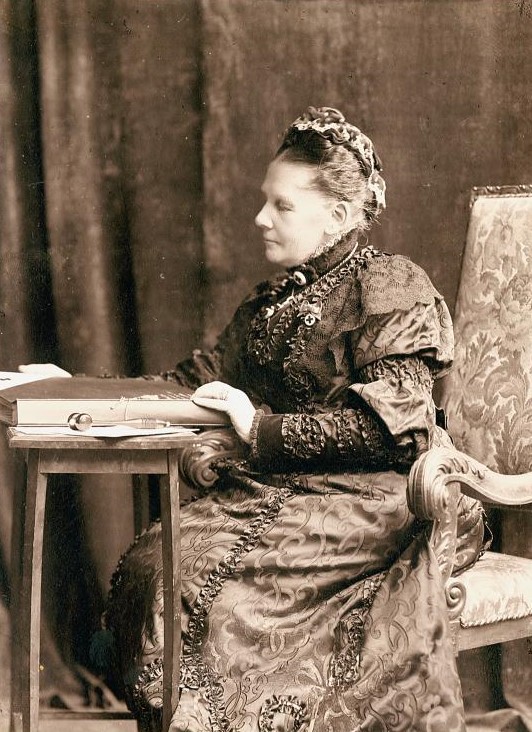